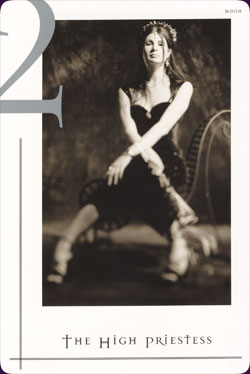 The Jamie Hankin Tarot is an elegant artistic photography deck of 22 cards. It features three female models, and was created originally as a promotional piece for the artist. 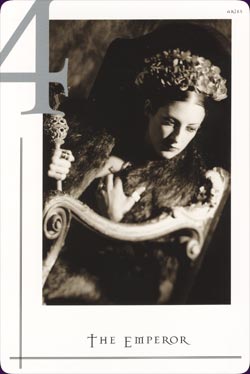 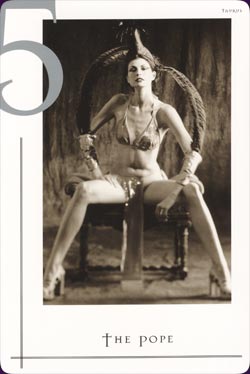 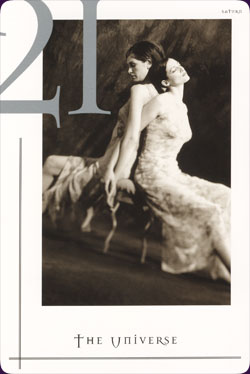 Jamie Hankin is a New York based photographer, who in 1999 created a twenty-two card Tarot as a showcase and promotional piece for his photography skills. In his deck, the Tarot archetypes are illustrated through costume and prop, pose and lighting, and feature black and white photographs of women posed in a photographic studio.

It isn't a traditional Tarot, but the trumps are definitely recognisable despite the artistic licence that has been taken. The Hermit carries a staff and lantern; Death holds a scythe and wears a necklace of bones; the Emperor, a woman, but holding a scepter and sitting on a chair suggestive of a throne. There are also modern touches – the Chariot is a motorbike, the model sitting astride it wearing a leather jacket and a level stare. The Pope is also unconventional: the model wears silver armbands from which huge decorative feathers rise. She sits on a small table in a confident pose, her hands on her knees.

All of the majors are traditionally titled but for the substitutions of The Pope for the Hierophant, The Seeker for the Hermit, and the Universe for the World. Other cards caught my interest, being cleverly shot and posed. I liked the serenity of the High Priestess, the way her face is in focus while the rest of the picture is blurred, but the Moon is my favourite. An elegantly dressed women sits, side on to the viewer, in a plush chair. Her pale face is lit up in profile, and it is the brightest spot in the card.

The Jamie Hankin Tarot cards are larger than normal, sized at 4 x 6 inches. The backs of the cards have a silver, black and white design based around Jamie’s initials, and her name and phone number printed at the top and bottom. The cards are very professionally produced with smooth edges, rounded corners and medium gloss on the cards, and are packaged in a silver zip-lock anti-static bag.

The deck also contains four extra informational cards. The first card has simple definitions for Tarot and Tarok (the game) and a quote from Lady Frieda Harris (artist of the Aleister Crowley Thoth Tarot). The next two cards contain brief titles and meanings for the cards, such as, "The Fool – One Who Walks Without Fear" and "The Magician – The Communicator". The final card at the back of the deck thanks the models, stylists, assistants, designers and printers involved in the creation of the deck

The Jamie Hankin Tarot is a glossy and professional art deck worth adding to anyone’s collection. As it was originally produced as a promotional tool, it isn’t widely available and there are only a few decks left; but according to Jamie, as it has recently been discovered by the Tarot community, he is considering a further reprint.