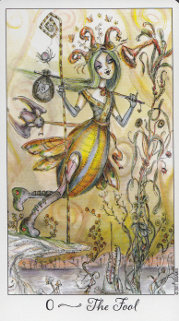 The Joie de Vivre Tarot is the second deck from Paulina Cassidy (the first was the Paulina Tarot. It's in Paulina's unique artistic style but brighter, less complex, and less busy than her previous deck. 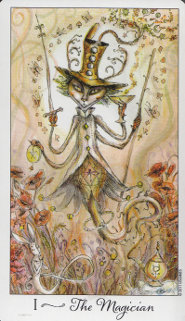 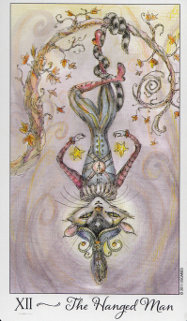 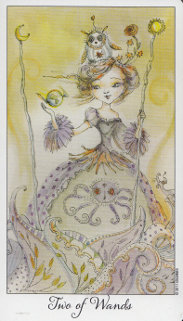 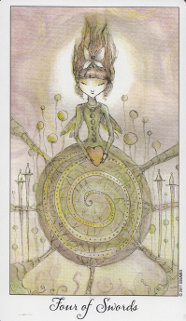 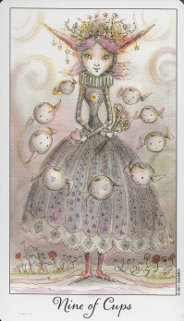 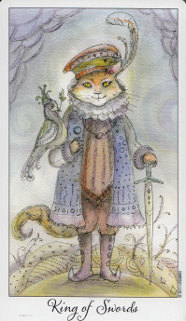 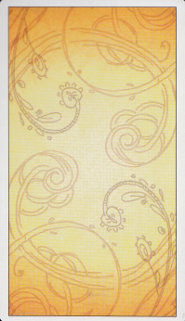 “Joie de Vivre” - French for “joy of living”. And yes, this is a joyful, light-hearted deck that brings out the child in each of us – something that we don't do often enough! In her introduction Cassidy notes that the living beings that occupy this realm are all sentient souls of love who want the best for those that choose to journey through their world. They will help you lighten up in order to better tap into your intuition and connect with Divine source. The Seeker will find themselves responding through heart, mind, and spirit.

The presentation in the LWB (Little White Book) is what I have come to recognize as the style of U.S. Games Systems, Inc. - text only, keywords, a short paragraph describing the energy of the card, and the upright and reversed meanings. At the end of the book is a unique six card spread entitled “Spreading the Joy”,as well as blank pages for note taking. The author bio is something that you will want to read also – because it is here that you will find that Cassidy has been a student of energy healing for over ten years, and applies her studies in Reiki and pranic healing to her visual art, and that she also composes and records songs. Certainly the energy of the healer comes through in this deck!

The cards are 2 3/4” by 4 3/4”, of good quality, glossy card stock. The backs show a 1/4” white border around a beautiful orange center, and are reversible. The card faces show the same 1/4” white border, with the card titles at the bottom: number (in Roman numerals) and title for the Major Arcana, number (in text) and suit for the Pips (numbered cards), and title and suit for the Court Cards.

The art is very gently done fantasy, in pastel colors. The Fool seems to be floating through the air, and there is a bit of the Mad Hatter in the Magician's top ha. The Hanged Man hangs from a vine in mid air, while the Two of Wands is a lovely muse standing with a globe in one hand, and her owl companion appearing to be sitting on her head. The Nine of Cups is a lovely lady with nine cups swirling around her. The Four of Swords shows a figure standing, with a sacred spiral where her lower body would be. The LWB notes that this is Chrysalis, who has retreated to her sacred cocoon of soul healing, from which she will emerge a butterfly. The King of Swords, a cat-like figure, stands with his dove companion.

This is an excellent deck to use with clients that are a little nervous about the Tarot, or to take yourself, or a client, “out of the box” in your reading. It would also be a wonderful deck to use in a comparative reading. It is not a deck that would be used by a beginner to learn to read the Tarot, but it has its place. The artwork alone is worth the price of the deck!

The term “joie de vivre” is one of the many French expressions that doesn’t have an exact translation in English. The expression has, if you will, a certain je nais se quoi. The literal translation is “joy of life,” or “joy of living,” but inherent in the expression is a child-like whimsy and sense of wonder that the English translation just doesn’t capture. It is a fitting title for Paulina Cassidy’s new tarot deck, Joie de Vivre Tarot.

It is hard to believe that Cassidy has had time to produce a second deck. It feels like just yesterday I was interviewing her about the (at the time) forthcoming Paulina Tarot. When I had the pleasure of speaking with Cassidy, it was clear to me the creatures that appear on her canvas do so of their own volition. The artist is merely making visible the entities that already exist.

In Paulina Tarot, those creatures had walk-on roles in a fairly traditional deck. In Joie de Vivre Tarot, Cassidy’s unique creatures are the stars of the show.

In the LWB (little white book), written by Cassidy, the creature on each card has a name, and a bit of a backstory. They have names such as Jaunt, Prezto and Blossom. I hope she writes some detailed stories about them; they are fascinating.

The images of Joie de Vivre Tarot are unmistakably the work of Paulina Cassidy. They are fanciful, otherworldly, and, at times, macabre. It seems to me that in her first deck, Cassidy was trying to hold back just a little, maybe trying to be a wee bit tarot-proper. In this deck, she has given us a full view of the landscapes inside her head.

In trying to describe these images, I can only say this. Imagine that the characters of Tim Burton, Lewis Carroll, Edward Gorey and Dr. Seuss all met up at a party and dropped acid together. No, that’s not quite right. Acid is too strong, electric and chemical to produce the fine detail, old-fashioned whimsy and muted colors of this deck. Maybe they ate some mushrooms instead. On their collective hallucinogenic trip, they decided to create a tarot deck. The result of such an adventure might look very much like Joie de Vivre Tarot. Don’t get me wrong, that’s not a bad thing at all.

The cardbacks and card interpretations do honor reversals. The cards are standard sized, and rendered and packaged in classic U.S. Games style. The four suits are Swords, Wands, Cups and Coins. There do not seem to be specific elemental references in the card images. Strength is card Eight, and Justice is Eleven.

Many of the characters have sweet faces with big eyes and pointed chins. There is a very Victorian feel to the deck. There are clever elements to the images, such as the clock in the hair of Lady Temperance. While the images on the cards are certainly non-traditional, they make sense, and are delightfully imaginative.

I have a theory about this deck. I think it will be very effect for intuitive/psychic tarot reading. The reason is this. Joie de Vivre Tarot is arguably the most imaginative deck ever. It communicates emotion, and sparks imaginative thought. Imagination is seated in the third eye, or brow chakra. This chakra governs the eyesight with which we view the cards, as well as our psychic vision. By stimulating the imagination and the eyesight, these cards will stimulate our psychic ability as well.

Joie de Vivre Tarot will be a great deck for anyone who finds it appealing, from beginners to professionals. I probably won’t use it myself – I find the legs of many of the creatures absolutely creepy. Some legs are spindly and spiderlike. Some creatures seem human except for the one, tail-like leg emerging from their bulbous bodies. These details, and some others, make me feel as if I were present at the imaginary party with the Lorax, the Mad Hatter, Sally the Ragdoll and the Doubtful Guest. I ate the mushrooms, too, but I had a bad trip.