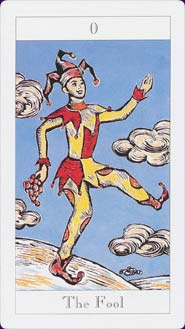 Also known as A Tin of Tarot

These cards, by Jonathan Dee and artist Shirley Barker, have been published as part of several beginner sets. The tarot symbolism has been redrawn and simplified, and the suits have unillustrated pip cards. 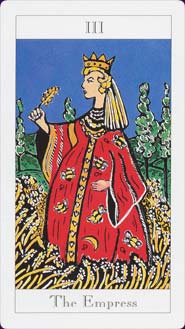 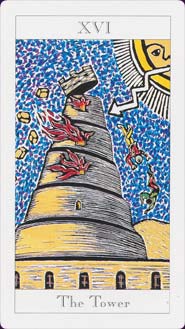 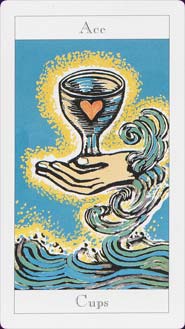 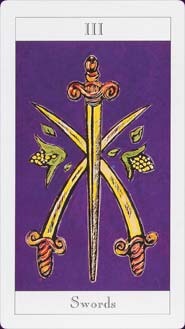 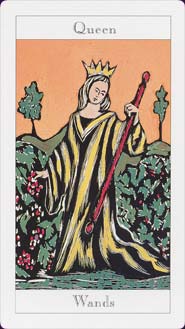 I bought this Tarot and book set many years ago, and for some years I was using it very regularly. Then it had a lay-off in the depth of my collection, and now I and my clients are revisiting it. (I have given the accompanying book away so I am unable to review it anew, but this is what I thought of it a few years ago.)

I always liked the deck better. I love the backs: a side-to-side symmetry, it nonetheless has an up-down orientation that I find handy and pleasing in any deck. The painted style of the backs, too, is even more reminiscent of woodcuts, which I love, so it wins there.

Having mentioned the faces of the cards, I'd better go there in a bit more detail. All of the deck is done in a modern-archaic style designed to imitate woodcut images and also with a very Marseilles-like feel to it, although it is a lot more accessible to modern minds than the actual TdM. The pips are unillustrated, although many of them are decorated or arranged in the body of the card so as to hint at their meaning. The least "useful" suit in that regard is, in my opinion, Swords. Cups have a largely turquoise colouration, Swords purple, Pentacles yellow and Wands orange. This departs from the traditional colour assignations slightly in a way that people from earlier centuries wouldn't do: as the artistic style is retrospective and the creator hearkens back to the Elizabethan astrologer John Dee in his name, I think he is quite deliberately trying to pass the deck off as older than it is with at least some users, rather than just working towards an antique feeling. When I first acquired the deck that suspicion irritated me, in fact, but I learnt to live with it. It's worth noting that in this deck Strength has been numbered VIII and Justice has been numbered XI.

Looking at just a few of the cards I find most interesting or likeable, and bearing in mind that the artwork on all of them is woodcut-like and the imagery spare, I do have a few favourites. Justice is not blindfolded. Her scales, which are empty, are unbalanced and tilted in her left hand, and her red sword seems suspended in the air next to her, her hand is curved lightly around it as if in a caress and does not have a good grip.

Whereas Rider-Waite style decks have mobile-looking chariots on the Chariot card but immobile statuary as steeds, this chariot has prancing, moving sphinxes harnessed to a structure which looks for the world to me like a built-in fireplace with a canopy over it: that Chariot is going nowhere, no matter how the animals strain.

The Lovers are set in Eden - the fruit tree and snake are clearly visible.

The Magician, most Marseilles-like of all the cards, has extra ceremonial objects on the Altar such as crystals and a book, had a hand on his hip and a small monkey sitting on the table watching him attentively.

The Hanged Man dangles from a shaped cross-beam on two growing uprights on either side of the chasm that his head is hanging in. He is wearing the working uniform of the jester.

The Wheel of Fortune is very CM in its symbolism, and I believe couldn't have been designed to look like that before the turn of the 20th century, so if he is looking for an antique effect, this is one of the cards that gives it away.

There is something very odd about the central figure in the World: at first I thought I had a problem with its androgynous nature, but then I realised it was that its breasts didn't look human at all - they reminded me of a lactating gorilla I'd seen some time ago. Animal breasts on a hermaphrodite human. Odd.

The King Cups is fairly obviously a portrait of Queen Elizabeth I, and brings to mind her famous speech: "Though I have the body of but a weak and feeble woman, I have the heart and stomach of a lion." She refused to marry and hand away her kingdom to some worthless man - she was truly King (ruler) as well as Queen (mother of the next ruler). In this card and this card alone, the deck has great cultural authenticity.

And the last card I've singled out for individual mention is the Tower. Here, the lightning comes from the Sun, telling us, perhaps that it and the Sun card are related. I haven't fully explored that connection yet. It is a fairly normal Tower in that figures and brickwork fall and flames leap from windows, however it is worth mentioning because it is the one card in the deck which has convincing perspective and three-dimensionality, as well as a retreating structure that smacks of very, very modern architecture.

How does the deck work? Better than you'd expect a modern deck pretending to be older than it is to perform. As long as your mind is clear, it gives good, clear readings, but it is not a beginner's deck despite the book, not unless you have cut your teeth on another deck first. There is simply not enough detail in any of the images for a novice to scry into them if they become stuck on meanings. I have a fondness for it. I'm glad it's decided to come out of retirement and join me at work for a while.