Tarot of the Journey to the Orient 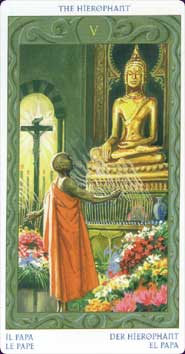 The Tarot of the Journey to the Orient is based upon the fables told by Marco Polo of his 24 year journey through Asia and the Orient, after his return to Venice. The minors are snapshots of live scenes, whereas the East-meets-West majors are more mythical.


Card Images from the Tarot of the Journey to the Orient 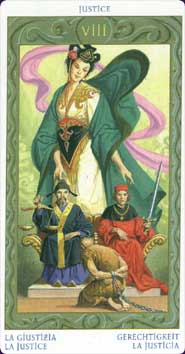 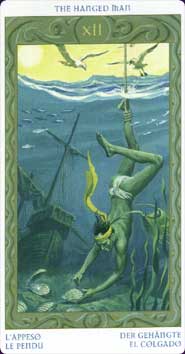 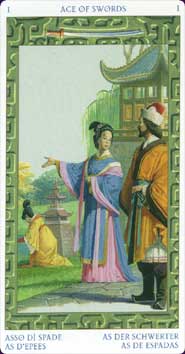 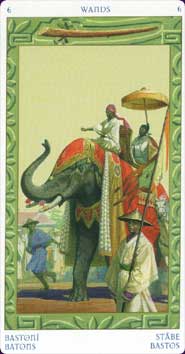 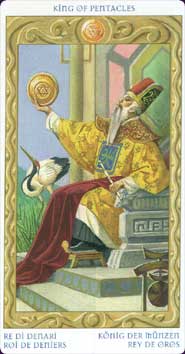 Tarot of the Journey to the Orient Review by Solandia

The Tarot of the Journey to the Orient, subtitled the Marco Polo Tarot, isn't meant to be a strictly real and historically accurate tarot deck. It instead describes 'scenes, custom, dress and rituals' in the flavour of Marco Polo's tales, who, as we all know, was an Italian explorer who returned home to his native Venice after 24 years of travels in the Orient and Asia.

The majors of this tarot have the feeling of illustrations from a fable, one where the artist has never seen what has being described. Almost all the 22 cards have a dual scene on each card: one representing the East and one the West. Those cards lacking the dual scene instead show people with their counterpart from the each culture. It sounds a little clumsy but it isn't. The double scene is well-executed and appears natural, without being overly busy,

That said, I am not keen on the facial artwork in some of the earlier majors. The Fool, Magician and the High Priestess look like Westerners wearing makeup (a la Mickey Rooney in Breakfast at Tiffany's). This did influence my initial impression a little negatively, as these as the first cards in the deck to be examined, but going through the rest of the cards restored my good opinion. My favourites are the Hierophant and Hanged Man cards, the Four of Wands, and the Nine of Pentacles.

The minors on the whole are more straightforward, realistic-looking scenes of Eastern and Western people and situations. To my eye, these are the more appealing illustrations, but perhaps that is just my personal bias for photo-realistic cards.

All cards in the deck have an outer white border, and an embossed-looking inner border of different colours depending on the suit. The cardstock is thin and flexible (standard Lo Scarabeo) and the backs of the cards show an image in sepia both upright and reversed.

The little white booklet is a stapled all-in-one printed in English, Italian, Spanish, German and French, which have twelve pages each. The meanings for the majors are longer and more thematic than Lo Scarabeo's usual, and each have a divinatory phrase as a heading. For example, the Magician's advisory: 'Will shall make initiative successful' or Temperance's humorous, 'Meditation would be good'. The minor meanings are typically just a few words, and while they have some relation to familiar card meanings, this isn't consistent. Many of the more challenging or difficult cards have had their meaning altered to a more encouraging version. The Ten of Swords - "Supremacy over adversity and enemy forces; period of wellbeing and tranquillity." Five of Cups - "Awarded efforts, reconciliation with friends. Help in economic operations."

I found the Journey of the Orient Tarot to be an effective tarot deck and produce accurate readings for me, virtually from the first spread. It's not an outstanding tarot, as the art is a bit of a mix (stunningly real in some cards and a little Disney's in others). But it is attractive, a little exotic, and a good reading deck for any tarotist past the beginner stage.


Complete Details of Tarot of the Journey to the Orient


Similar Decks to Tarot of the Journey to the Orient

Home > Decks > Tarot of the Journey to the Orient