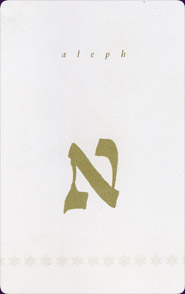 The Kabbalah Deck uses cards to explore the Jewish mystical tradition of Kabbalah. It has a total of 35 cards: 22 representing the Hebrew alphabet, 10 for the Sephiroth of the Tree of Life, and 2 extra cards with the symbol of the Hamseh.


Card Images from the Kabbalah Deck 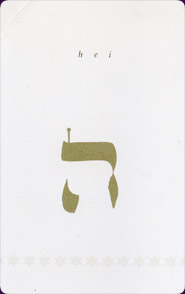 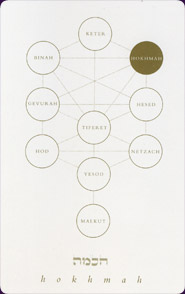 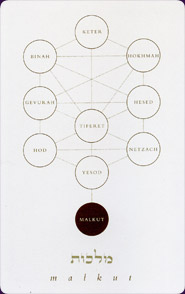 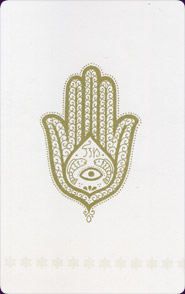 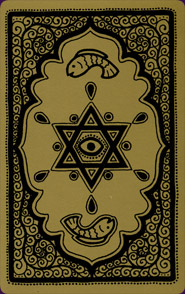 This is one of the most gracious decks that I have ever seen. Very understated, it serves its purpose well. The companion book is well written, and speaks with a very humble voice. For over twenty years Edward Hoffman has written on the subject of Judaism, in such books as "The Way of Splendor", "The Heavenly Ladder", and "opening the Inner Gates". He has written on the Kabbalah in connection with meditation, self-examination, and dreamwork, with a focus on actualizing inner potential.

The "Kabbalah Deck" is a working synopsis of the Jewish wisdom tradition of Kabbalah. It was written with two purposes in mind: contemplation and sacred study, and divination. It allows the student to thoroughly explore this mystical system, and to put it to work in daily life in a way that allows personal growth, as well as personal fulfillment. This is in no small part due to the work of people like psychologist Carl Jung, theologian Martin Buber, and theorist Abraham Maslow. Through their influence spirituality has become accepted by mainstream society as an authentic aspect of human nature.

Each card is presented in the accompanying book with the Hebrew letter, the English name, and a short discussion. From the book:

For Jewish mystics, it's no accident that Aleph begins the first of God's holy names in the Bible - Elohim - as well as the traditional esoteric name for God, known as the "Ein Sof" (Infiinite), whose supernal vastness and strength lie beyond all comprehension. Yet, as the Hassidic founder, Rabbi Schneur Zalman of Liady, declared, every soul "naturally yearns to separate itself from the body in order to unite with its origin and source ... the fountainhead of all life." For any Kabbalistic discussion of space, time, and human existence in the cosmos, the Ein Sof is the fundamental concept.

To bring greater energy into your sphere of daily activity, meditate upon the letter Aleph. It's especially useful to do so when embarking on a new project or venture in your life. When Aleph appears in a divinatory spread, its message is that you need to overcome inertia or oomph - particularly of a creative sort - is currently essential.

There is an excellent preface to the 10 Sefira that discusses the layout of the Tree of Life, the triads that make it up (Keter, Hokhmah, and Binah; Hesed, Gevurah, and Tiferet; Netzach, Hod, and Yesod), the shadow vessel of Daat, and the Sefirah Malkut that completes the Tree.

At the end of the accompanying book are several exercises that allow the student to work with the cards for divinatory and meditative purposes.

The deck itself is made up of 35 cards - 22 cards representing the Hebrew alphabet, 10 cards representing the 10 Sefirot of the kabbalistic Tree of Life, and three "blank" cards bearing the symbol of the "Hamseh" - a hand shaped talisman with an eye in the center that is said to bring good luck. These cards are to be used as extra cards if the same letter is required more than once to spell out a Hebrew name.

Exercises are given for meditating on the cards to allow the student to: experience their energy; work with the five other letters to strengthen ones own spirituality; meditate upon each of the 10 Sefirah; work with a "card a day" in an effort to understand the essence of each day; work with a "card a week" in order to understand the tone of the following week; seek guidance in reference to livelihood, relationships and love; messages for Rosh Hoshana, Passover, and the Hebrew Year; receive birthday messages; understand the energy of your spiritual name; work with Hebrew words as inspiration; work with a group focused on spiritual sharing; work on nurturing a family or group; begin a new enterprise; prepare to travel; work with letting go (completing unfinished business); discover your spiritual timeline; work with your dreams; find balance in a moment of crisis; accept a moment of opportunity.

There is an appendix covering Hebrew words of inspiration, including numerical values for Hebrew letters, and an in-depth list of resources.

The cards themselves are 3 1/4" by 5", made of heavy, quality, non-glossy card stock. The backs are black and gold, with a 1/4" gold border, followed by a dotted black border, then a solid black border. In the middle of the card we there is a pentagram, with an eye in the middle. Over and under the pentagram is the glyph of a fish. Lacy black lines form a patchwork surrounding the pentagram and fish. The face of the cards is stark white. On the cards representing the 22 Hebrew letters, we find the name of the letter, in fine gold lettering, at the top of the card. In the bottom third of the card is the Hebrew letter itself, in heavy gold. On the 10 cards that represent the 10 Sefirot, we see ten circles, in fine gold, laid out in the Tree of Life format. In the center of each circle, in fine gold letters, is the name of the Sefirah. The Sefirah that is being represented is in solid gold, with the name in Hebrew and English lettering at the bottom of the card.

This deck and book will work well for anyone, whatever their faith. The simplicity of the cards, and the well written text, combine with the exercises to forge paths to inner understanding and wisdom that bring a great sense of peace. From my personal point of view, this system would also work well in conjunction with other meditation/divination systems, such as the Tarot.