Kabbalistic Visions: The Marini-Scapini Tarot is a project from author Marco Marini and illustrator Luigi Scapini. The 78 card deck explores tarot symbology through its links with the Tree of Life and 22 letters of the Hebrew alphabet.


Card Images from the Kabbalistic Visions 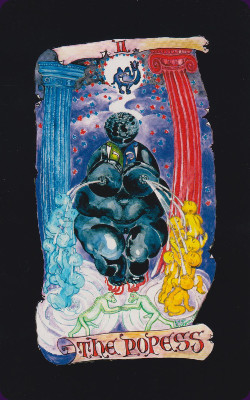 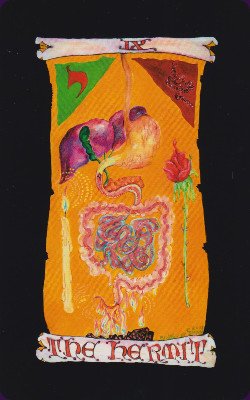 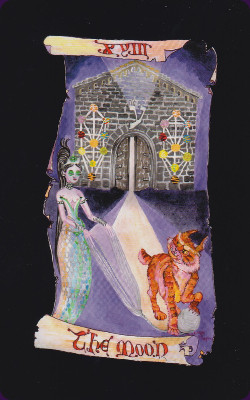 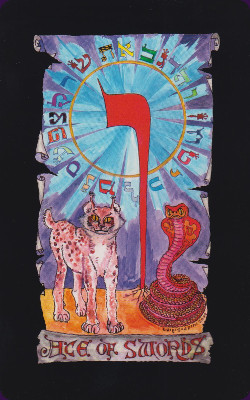 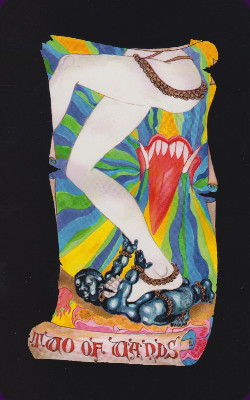 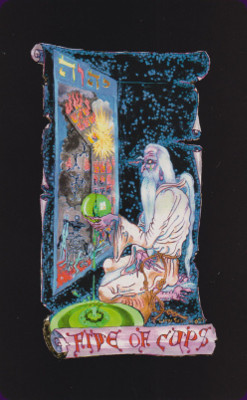 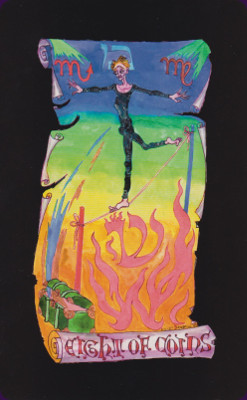 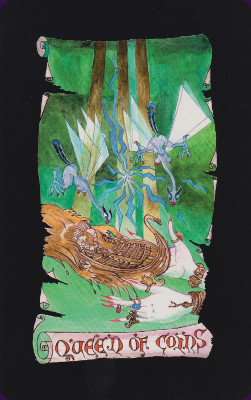 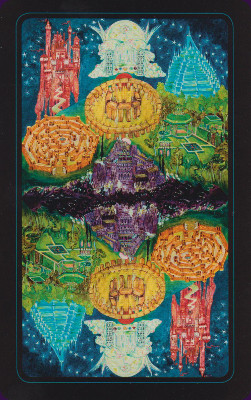 Italian artist Luigi Scapini is the illustrator of several well-known historical tarot decks published by Dal Negro and U.S. Games, among them inspired interpretations such as the Medieval Scapini and the Shakespeare Tarot: Tarocchi di Romeo e Giulietta. This is his first collaboration with Italian author Marco Marini.

The Kabbalistic Visions deck and book set published by Schiffer comes nicely boxed in Schiffer’s usual quality packaging, along with a fold out art poster of the Kabbalistic Tree of Life. The approximately 5.5” x 3.5” cards are undeniably attractive; vibrantly colorful, and presented on sturdy card stock with silvered edges. Each card is depicted as if painted on a scroll against a black background, unfortunately making the borders over-large and the detail of the artwork difficult to appreciate.

Although my personal exposure to Kabbala is limited, I understand Kabbalah to be a body of esoteric teachings intended to explain the relationship between the eternal and unchanging Creator and the mortal and finite universe. It is this relationship that is explored and interpreted via Marini and Scapini’s collaboration.

Marini states “the vision of the Marini-Scapini Tarot arose from the transformation of the classical tarot meanings resulting from the combination with the Hebrew alphabet letters.” The book is a hefty 255 pages, and includes chapters on the Tree of Life, the four worlds of the Kabbalists, and the letters of the Torah. A chart of Hebrew letter correspondences for each Major Arcana card is also provided.

In the introduction, Marini tells us that Egypt is “considered to be the birthplace of the Tarots”, and implies that the game of tarot as it first appeared in the 14th century in Northern Italy (“before they arrived in Europe from Egypt”) was derived from an extant esoteric tarot, rather than the other way around. Marini affirms “there is an inseparable connection between the symbols contained in the Major Arcana and the teachings handed down by the ancient Egyptian priests during almost 5000 years of Egyptian history”, and points to the 18th century work of Court de Gebelin and Eliphas Levi as confirmation of the Egyptian origins of the tarot. However, research conducted by established experts including Robert V. O’Neill, Dummett and Decker, and Cynthia Giles, has shown that there is no evidence whatsoever to support this theory. Although Marini asserts “it is not by chance that every Tarot corresponds to a letter of the Hebrew alphabet and a number”, any perceived correlations are, in fact, entirely coincidental.

A faulty premise does not, however, invalidate the resulting tool. The Marini-Scapini Tarot presents an intriguing combination of esoteric traditions which can be utilized in the process of expansion of personal consciousness and growth. Exploring these possibilities is what opens doors to a more in-depth appreciation and understanding of the human condition and our relationship to the world, affords us an opportunity to rise above the mundane and, in the words of Cuthbert Hicks, “touch the face of God”.

The text for each individual card is fascinating. It is evident that Marini had a particular vision for each archetype as interpreted through the lens of Kabbalism and subsequently communicated to Scapini to capture and express.

I especially enjoy decks that deviate from the standard RWS imagery and force me to view the cards with a fresh perspective, suddenly seeing for the first time a facet of a diamond that has always been part of the stone. This is why I love the tarot. The Kabbalistic Visions deck is to be pored over, its details considered from various angles and absorbed into the psyche.

As an example, the Kabbalistic Visions version of the High Priestess of the Major Arcana is The Popess, depicted as the Goddess (in the recognizable form of the Venus of Willendorf), from whom all life flows. Marini describes the two columns (in RWS version of the card, the columns support a veil between the seen and the unseen) as Chokmah (higher wisdom) supporting the cosmos, the astral origins of all forms that exist in the physical, and maintaining the elements of creation in a perfect balance. The duality represented by the blue and red pillars is overcome and combined in the starry sky by Yesod, the power of connection, which translates spiritual concepts into actions that unite us with God. The camel at the top is the path of Ghimel (“camel” in Hebrew), leading to awareness through the confluence of the letters Qoph (the unconscious) and Resh (the purifying sun), as seen on the breast of The Popess.

The Nine of Swords is the traditional “dark night of the soul” card, and this theme is carried over into the Marini-Scapini concept of the card. A naked woman is tied to a torture device and is covered with visible bloody wounds (she also has very hairy armpits, but whether this adds to her level of discomfort is unclear). The symbol of the Moon on the top left points to the influence of Yesod (the power of connection, as discussed in The Popess, above) and the sigil for Mars, on the top right, is an indication of strife and aggression. The card relates to the sphere of Geburah, which represents judgements, limitations, and restriction. The Hebrew letter Zayin appears close to the figure’s head, symbolizing a struggle, and can also refer to manacles. The victim must “clear and purify the unconscious” by recognizing self-sabotage in order to move past the state of the Nine to the completion state of the Ten.

Finally, we have the Knight of Swords. A girl lies dreaming of a knight in full armor, who stares back at his naked reflection in the mirror. Yetzirah, the third of the four worlds of the Tree of Life, signifies the world of form and influences this card. The mental aspect of the images we create with our minds blends well with the suit of Swords and the element of Air. The sleeping girl is accessing her animus, or masculine inner personality, encouraging action (Knight) and inner growth by processing those mental images and transforming them into reality. Part of this process is recognizing and removing the various masks and the armor, which at one time provided protection but now weigh her down and impair her vision. Zayin signifies strength and force, as also evidenced in the Nine of Swords. Marini refers to the blue circle at the bottom left of the card as “an amazing access door to enter the double reality” of this card.

Marini’s divinatory meaning for each Major Arcana card depends on the position of the card in the layout; he provides various interpretations for the positions of Past, Present, Future, Obstacle, and Final Result. Many of the interpretations seem to be an odd fit, perhaps due in part to my lack of familiarity with Kabbalistic correspondences. No reversed meanings are given. The Minor Arcana cards each have a single divinatory meaning.

If exploring possible Kabbalistic associations to the tarot appeals to you, this deck and book set is a fine place to start. The references to the Hebrew letters and the spheres of Tree of Life in the divinatory meanings make the application of complex Kabbalistic concepts interesting as well as accessible.