A deck based on the Kalevala, a Finnish national epic, constructed in the nineteenth century and based on rural poems and songs. The card art of the Kalevala Tarot is brightly coloured in strong primaries.


Card Images from the Kalevala Tarot 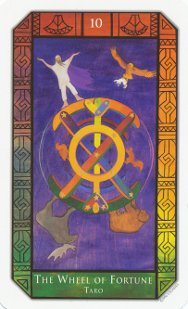 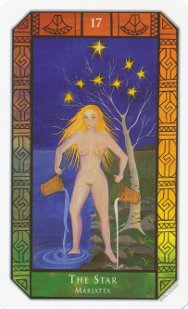 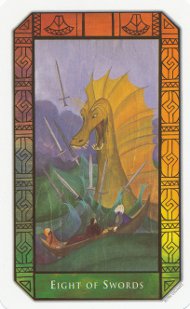 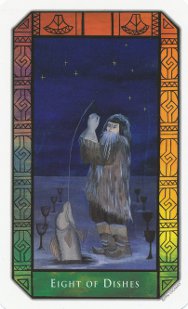 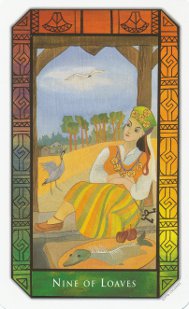 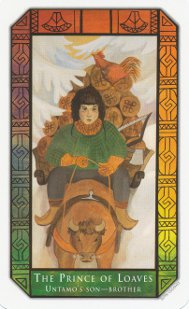 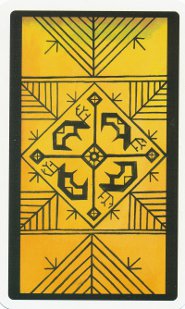 The Kalevala Tarot is based on the Finnish national epic of poems, which were collected and publshed in the between 1830 and 1840. The cards feature semi-primitive art, based upon the characters in the epic.

It is similar to Celtic-based decks, in that it uses mythical characters to portray card personalities. Some of the suits are renamed, but not unreasonably so. Traditional tarot symbology is absent, however, you can still use the deck for tarot readings if you know your card traditional meanings.

The meanings that come supplied with the deck seem a little odd at first, however, when examined a bit deeper, they don't depart too heavily from the norm.

The card backs and borders feature what I presume to be a Finnish geometrical pattern, similar to what you might find on a hand made blanket or quilt.

The book, at over 200 pages, is well done. Card meanings are adequately described, and card photos accompany each description. Three spreads are included, which appear to be a little different than the usual. The six card Ukko's Tools spread seems reminiscent of a small Celtic Cross, but differs in that the user is prompted to reevaluate the reading in a seventh step.

I believe this deck to be worthwhile addition to a collection, and seems practical enough to be used for daily readings.