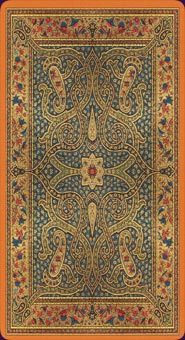 The Kamasutra Tarot is based on the "textbook of desire" best known as a catalogue of sexual positions. The cards are indeed graphic, but are intended to reflect fourth century attitudes towards sex rather than modern Western views. The imagery across the cards is also deliberately repetitive, so that the subtle cues of posture and body language of the couple are more obvious.


Card Images from the Kamasutra Tarot

The Kamasutra Tarot combines a Tarot structure with 78 images in the style of the ‘textbook of desire’, the ancient Indian book that covers romantic love, the mechanics of sex, the process of finding a wife and more, but is most well-known for its inventive illustrations of sexual positions.

The creation of this 78-card deck was a little unusual: rather than associating a card with each sexual position, Indian artists were commissioned to create images in the same style and character as the original illustrations in the Kamasutra. Twenty-two were chosen, adapted, and related to the twenty-two major arcana cards, and fifty-six images were organised into four suits and then related to the minor arcana meanings. It’s not clear whether the artists were familiar with Tarot and the deck has a best-fit quality, where illustrations were chosen to match the archetype rather than being created from an understanding of the archetypes and symbolism.

Visually, the card art is stylised, stiff, detailed, with what appears to be the same couple appearing in different (often improbable) sexual positions. The couple are mostly outdoors, with the sky visible through large windows even when under the luxurious palace roof., which changes from morning, afternoon to starry night skies, over landscapes that might be lakes, hills, orchards or well-kept forests. The male figure always wears a turban and generally robes, while the woman is nearly always naked or only partially costumed. The backs are a pretty, reversible design like an oriental rug in muted red, blue, yellow, and green.

Some tarot symbols are recognisable in the major arcana, such as the tools on the ground in front of the couple in the Magician, a large key in the foreground of Hierophant, and scales in the background of Justice. The minors are also fully illustrated scenes, but diverge even further from their tarot roots. The suit symbol is placed in the outside border of the card, while the inner scene is largely devoid of tarot symbolism.

The Kamasutra Tarot is designed primarily as a serious tool for sex magick – the booklet warns against frivolous use, like just drawing cards and trying the positions depicted, as potentially painful and unsatisfying! Instead, it recommends that the cards are used only when the reader has ample time and attention to devote to the deck, beginning with a ritual bath and preparation, using the deck naked if possible, and placing the shuffled cards into symbolic positions. I think the imagery would also benefit from careful attention and close study – these aren’t cards where the meaning is immediately apparent.

The companion booklet for this book is quite wordy for a Lo Scarabeo leaflet, and usefully invests the most space in explaining the concept of the Kamasutra and Tarot marriage and how best to use the cards. It mentions up-front that there are three main challenges for Westerners with this deck: 1) Graphic sexual acts and explicit genitalia, 2) ‘Authentic 4th and 5th Century attitudes towards gender and sex’, as in the different morals and attitudes to women and equality in those times, 3) The repetitious artwork - each card image differs only subtly from the others, with changes in the details and body language, the direction of a glance or the angle of a hand. Here, meditating “on the dynamic expression suggested by each act you witness” is suggested – i.e. What might be the story of the couple? How is the energy of the figures being exchanged? What is the overall theme of the card? What might their emotional or physical states suggest abut their actions and attitudes?

The rest of the booklet has a small list of single keywords for interpretations (the most meaning is to come from your own study and intuition). The usual original spread provided in the booklet is the Kamasutra Tarot spread, with uses six cards It’s unusual because the spread is different for men and women – the cards are laid out in a staff positions for males or a circle for women.

Designed to be a serious tool for sex magick and as a divinatory tool for personal or sexual questions, I’d recommend the Kamasutra Tarot for people who are more interested in it for study or magickal purposes. As a straight divinatory tool it is definitely different, but may prove challenging for the reader used to more obvious expression and Tarot symbolism in their cards.