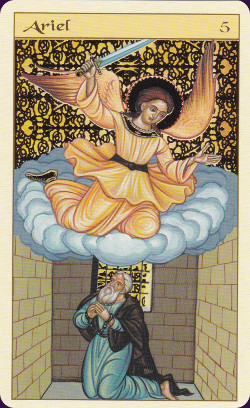 The Karma Angels Oracle is a 32-card deck with traditional angel illustrations in an iconographical style. It's a Christian-oriented deck accompanied by gentle wisdom and advice in the guidebook by Marcus Katz and Tali Goodwin. 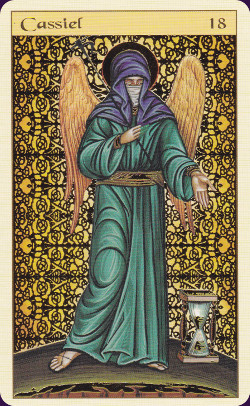 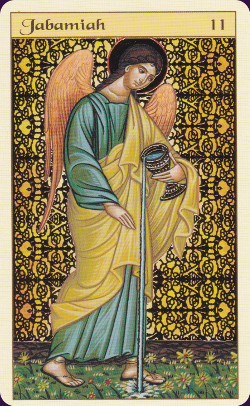 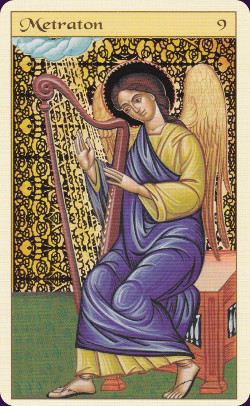 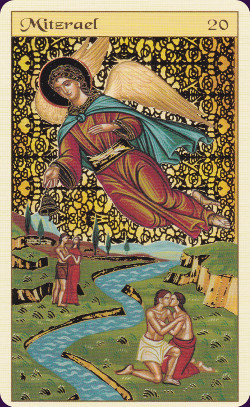 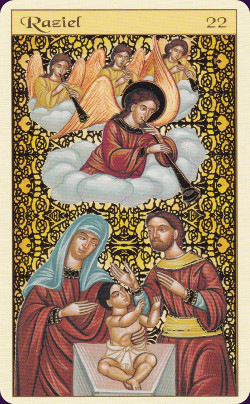 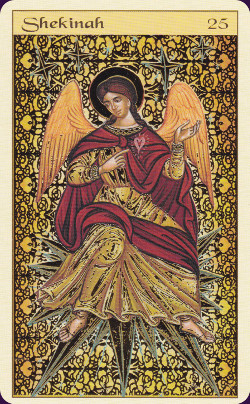 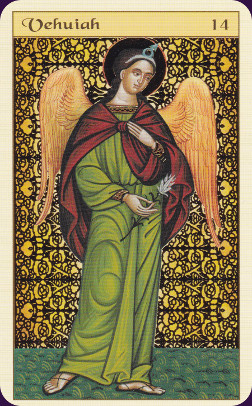 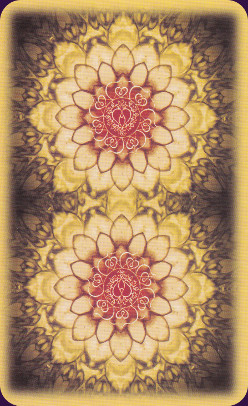 The Angel is a supernatural being who is both a messenger and a shepherd who guides us towards the Divine. Through the law of cause and effect which, for the purpose of this deck, is interpreted as Karma, angels assist mortals to align themselves with the Divine Plan. They are in effect both our guardians and our guides.

There are 32 angels depicted in the Karma Angels deck and they embody a broad spectrum of qualities and concepts such as: Miraculous Messages, Health Helper, Vengeance and Vitriol, Calming Conflict, Activator of Ambitions and so forth. Angels apparently adore alliteration.

Just to clarify - this is very much an oracle deck – at 32 cards it is less than half the size of a standard tarot deck, has neither Major nor Minor Arcana, no court cards, and no reversed divinatory meanings.

The cards measure 75 x 125 mm which makes them a little broader than most standard tarot decks, and generally smaller than many oracle decks. The card stock is good – quite thick and solid, but not heavy, and not particularly flexible. The cards are smooth with a low sheen finish, except for the areas that feature heavy gilding. The cards are easy to handle and shuffle well without any issues such as clumping or slickness. The print quality is excellent – crisp, clean lines, solid colours, no misprints, no blurring, no colour bleeds.

The artwork replicates the Byzantine Iconic style – Medieval dress, stiff postures, two-dimensional, static, flat, with heavy ornamentation – usually gilt – filling the background. This charming style appropriately recalls the earliest depictions of Christian subject matter including images of angels. The palette harks back to the symbolic colours favoured by artists depicting religious subjects – crimson, royal blue, sky blue, forest green, mustard yellow are the predominant colours. The background is a roseate design in gleaming gold which is so polished and fine it actually reflects one's surroundings (albeit a little blurrily).

Each card has a pale yellow border, with a deeper yellow strip at the top of the image containing the name of the angel, and card number in dark brown. The cards and guidebook come in a solid cardboard box with liftoff lid. The box has a glossy finish with sumptuous gilding surrounding images from the cards inside. There is also cursory information about the deck in six languages.

The 127 page guidebook has instructions in six languages – English, Italian, Spanish, French, German, and Russian. There is a short introduction which describes what angels actually are, and what karma is understood or interpreted as in western new-age philosophy. There is some cursory advice on reading this particular deck, as well as the suggestion that that Seeker take at least one message from the cards as an 'Angelic Mission'. This is basically a divine invitation to incorporate certain qualities (as dictated by the cards) into one's life.

Each Angel has a divinatory meaning, a Challenge, and a Lesson. All of these are positive in outlook, designed to benefit the Seeker spiritually and emotionally, and wise in advice.

There are instructions on how to use the cards to attract the blessing of a particular angel – three methods – meditation, dreamwork, and honouring/observing – are described. Three layouts are given for the Karma Angels cards – the 4-card Heavenly Message Layout, 8-card Angelic Realms Layout, and 9-card Guides and Guardians Layout. In addition to this is an exercise called A Month With Angels – this involves working one's way through the deck using weekly draws. The Seeker is advised to focus on each day's Angel card and record insights and reflections in a journal.

If you are looking for an Oracle deck with Christian inclinations that this is an appropriate deck for you. If you are interested in Angels and wish to expand your knowledge of them then why not start here? This deck will also appeal to people who have an interest in iconography and mediaeval art.