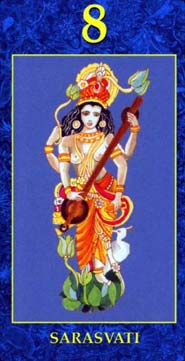 The Karma Oracle is a 33 card divination oracle, representing ancient Indian gods and goddesses. The cards are very brightly coloured and patterned.


Card Images from the Karma Oracle 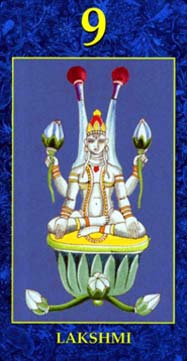 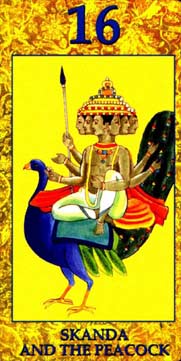 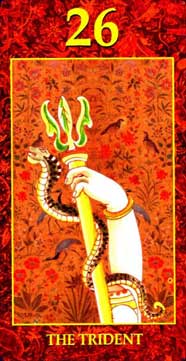 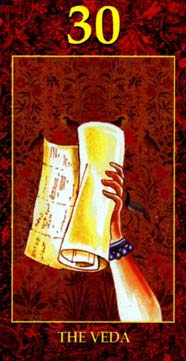 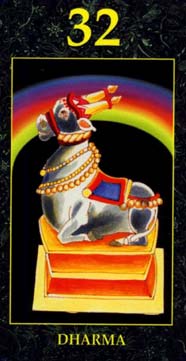 The Karma Oracle is a divination oracle composed of thirty-three numbered cards, reflecting the number of gods in the ancient Indian heavens. They are arranged in a color coded series of four groups: Gods And Immutable Principles (blue background), Animals yellow background), Objects And Symbols (red background), and Philosophical Principles (black background).

The accompanying 48 page booklet begins with a short discussion of karma and reincarnation. (literally begins with this discussion - the index is the very last page in the booklet!). This sets the tone for the book - all about destiny and reincarnation, how past actions have created our present, and how actions in the present will create our future. It is all about evolving, and how to break the cycle of reincarnation. The work that this deck addresses is highly personal, and meant to be used as a guide for right living, for understanding who and what we are, rather than as a tool that will give us "answers", so that we do not have to think.

Because of the nature of this deck, the book immediately set my teeth on edge. The name/theme for this deck is Karma Oracle, which in and of itself indicates to me something sacred. However, the author has chosen to discuss the usage of the cards as a "game". The intent of this deck, and the instructions for using it (which are in English!), seem to be at odds. To make matters worse, the directions for working with the deck are micro-managed to the nth degree! The deck "must" be consecrated only one time, which is to be done before one begins using the deck. So far so good - but only one time? Over time, and with specific clients, there may be a necessity for cleansing/grounding the cards again. Okay - maybe not the same as consecrating them, but that is not clear in this booklet. Placing them in a bag of their own is optional, according to the booklet - but at this point I thought it was at least nice that they mentioned this!

In setting up a consultation for the cards, you are to: (a) wash your hands under running water, (b) lay a white cloth on the table, (c) light a stick of incense, (d) place a full glass of water next to the cards. Place the deck in numerical order, and shuffle them eight times. Purify the deck by blowing on it three times and passing the cards over the incense three times. Knock three times on the deck, saying the querants name, surname and date of birth. Now the consultation begins, with the reader concentrating on interpreting the answers carefully, respectfully and sincerely. The intent here is clear, but I did not particularly care for the nth degree of preparation, nor the fact that these were not presented as suggestions, they were presented as "rules"!

The Specific Situation Game is another five card spread representing:

The prelude to drawing the cards is also micromanaged to the nth degree. The querant's day, month and year of birth are added together until a number of nine or less is obtained. After the deck has been shuffled and cut, cards are set aside until the card number that matches the querant's number is come to. That becomes card number 1. This is repeated five times, until all five cards in the spread are set out. Paying ever so much attention to the minute details takes the spontaneity out of the process. The reader is much less of a channel than a card counter - not something that I ever aspired to be!

The cards themselves are on good quality card stock, and sized to be a delight to use for those of us with small hands (approximately 2 3/8" by 4 1/4"). The backs have a small white border, and a fine red line surrounding an inner detailed green border. A fine yellow line delineates the inner picture, which is done in largely green tones depicting an outdoor setting with a family. The cards show this setting upright and reversed, so that one could not tell before turning it over if t he card was reversed or not. Interestingly - there is no discussion of reversed cards in the booklet.

My favorite cards in the deck were #26 - The Trident, which shows an arm with a hand holding a wand with a snake wound around it and a three pointed green triad on top (representing the three qualities of being); #10, Parvati, which shows the Goddess of Strength seated on a red seat, holding a white flower in her right hand, with a snake across her shoulders; #16, Skanda And The Peacock, which shows the young God of War with six arms and six faces, seated on a peacock; and # 30, The Veda, which is a text of wisdom, represented by an arm holding up a scroll.

There are several more "uninterpreted" games (read spreads) at the end of the book, to include The Akasha (a basic elemental spread applied to everyday life), the Seven Chakra, the Shiva And Shakti (a relationship spread), the Mount, Or Invisible Protector (a three card spread), the Twelve Aditya (an astrological spread), and Varuna's Reply ( a four card spread).

I liked the cards, and found the interpretations in the book to be adequate. For those who wish to follow the "rules", the process here would be interminable. For those who wish to use common sense and adopt the cards and spreads to their own way of reading, I feel that there is a depth of knowledge here that is very helpful. If you are willing to experiment, this could be an interesting oracle. In my opinion, it would not be a primary oracle for those of us that live in the western world.

Bonnie Cehovet is a Tarot Master, a professional Tarot reader with over ten years experience, a Reiki Master/Teacher and a writer. She has served in various capacities with the American Tarot Association and American Board For Tarot Certification and is co-founder of the World Tarot Network.