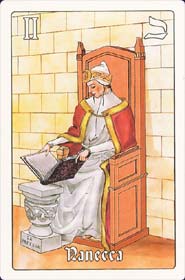 
Card Images from the Karmic Tarot 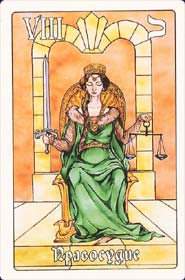 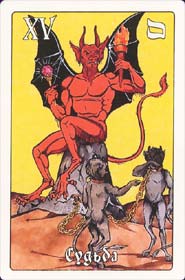 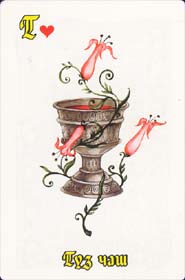 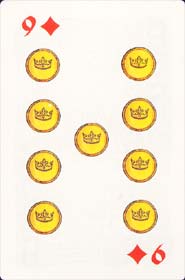 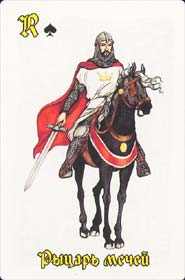 I first discovered these card images in 2010 on a photo web site. Since then the web site has come down, and I’ve been pulling my hair out trying to find out more about them. I finally bought a deck from a bookseller in the Ukraine on his eBay web site. He didn’t know much about them either, and the box and instruction sheet are in Cyrillic as well as the cards. The eBay seller thought that my deck had been printed before the fall of the USSR so they were considered contraband. They are simply called “Karti Taro” on the blue box.

The cards themselves are about the size of a poker deck, 60 mm by 90 mm (2.36”x 3.54”). That is attractive to me since I have short stubby fingers and a lot of my Tarot decks are hard to handle because of their size. The card backs are a symmetrical gold design, so reversals won’t be apparent. They are sturdy and flexible with a slight sheen on the face side and dull backs, like the white and gray cardboard that comes in mens’ shirts. There are also little stubs in the center top and bottom of each card where they were pulled out of the print sheets. Nice homey touch, in my opinion.

All 78 cards are present, and the major arcana conform to the A.E. Waite standard, with Strength as VIII. These also have white Hebrew letters in the upper right corners. The drawings are competently done, with as much skill as Pamela Coleman Smith’s artwork, but set in a somewhat later time, perhaps the Renaissance. (Sorry; I’m not an art historian.) Each card has a picture frame border in gold and brown; the colors are soft, but not pastel. The major cards have full color backgrounds.

The court cards are rather elegant men and women on plain white backgrounds, and the suits correspond to aristocracy (swords/spades), church (cups/hearts), merchants (coins/diamonds) and commoners (wands/clubs). The Italian suits are used in the art work, while the French suits are represented in the card corners like playing cards. The aces are also single tarot objects, sword, club, cup and coin. They are lightly embellished with scrollwork and swirls. The 2 through 10 cards are pips, with their suit symbols repeated to reflect the number of the card. I read a review on a Russian web site that pointed out none of the clubs or swords crosses each other the way they do on the Swiss 1JJ or Marseille decks. That does make them easier to identify.

I fell in love with these cards the first time I saw them because they are clean and elegantly simple. Although I don’t speak Russian, I have a passing familiarity with the Cyrillic alphabet. My Bing translator called the Fool (Russian “Durak”) “Idiot.” Not sure I’d see the same meanings in that word. But the images follow Waite so closely that the title is not needed for anyone familiar with the Rider-Waite deck or any of its clones.

I’ve had a Swiss 1JJ deck for decades, and this is more comfortable to use than that one, maybe because I never liked studying French in school. But they are comparable in style and usage, both decks having pips and good artwork. I use this Russian deck for readings as much as my Universal Waite deck, so if you’re comfortable with the minor card meanings, or can call to mind an image of the Pamela Coleman Smith drawing when you get a pip card, you should have no trouble with these.

As for the name “Karmic Tarot,” I don’t know how it came to be associated with this deck. I’m not familiar with Eastern religions, but I don’t see anything especially related to causality or rebirth in these images. Maybe the instruction sheet in Russian makes the connection. So if you’re looking for a deck that would fit in with Hindu, Buddhist, Tao or Shinto world views, you may be disappointed by the Western art design.

The other name, “Union Chernobyl” makes more sense. It seems that the cards were produced as part of a fundraising effort after the 1986 nuclear disaster in that city. That could also explain why they are so rare. Union Chernobyl is an organization that sponsors candidates for local government office who support Chernobyl victims, and advocates for the victims in getting food, medical care and other necessities. There are Union Chernobyl chapters in many former Soviet cities.

Neither the tarot card box nor the information sheet that I have gives the names of the artist or author. I know of two styles of boxes for these cards, both from the same publisher, Proton Plus LTD of the city of Saratov in Russia. My cards have no copyright date, and the seller said they were made before the fall of the USSR (prior to December 26, 1991). But the Russian reviewer gives a date of 2001. That may be for the cards in the white box. There is also an alternate form of the majors called Tarpas that uses square cards with just the images and black borders on either side for the titles.