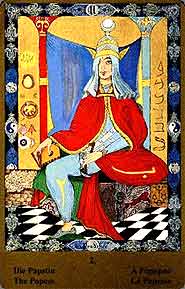 A richly coloured 80 card gold-foil deck, the Kazanlar Tarot is a mix of elements from the artist's European and Middle Eastern heritage, plus astrological, Hebrew and esoteric assocations.


Card Images from the Kazanlar Tarot 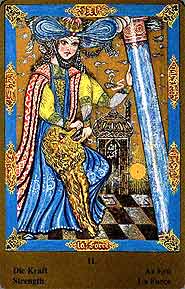 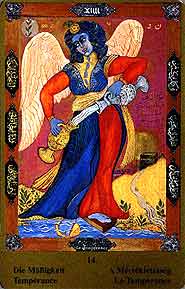 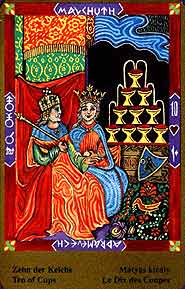 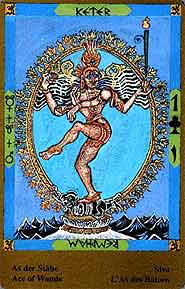 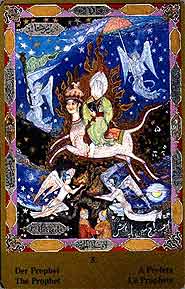 I came across the Kazanlar while searching for a deck with a Turkish theme. Much to my surprise and delight, not only does it contain a bit of Turkish influence, it is based on three major religions - Judaism, Christianity and Islam. Therefore, I realized right away it had the makings of a truly intriguing deck.

The creator of the deck, Dr Emil Kazanlar, inspired by his diverse family history, refers to the deck as being ecumenical, meaning universal. He comments on how an ecumenical attitude allows different religions to lead equally to God. He goes on to point out the Tarot is an ecumenical tradition which contains holy symbols of God found in similar form in most major religions. (Ref: Introduction in the Kazanlar Deck LWB)

In the Turkish language, "Kazanlar" means "many cauldrons". Interestingly enough, Kazanlar is not only the author's name, but each card is a cauldron in itself filled rich in color, history, symbolism, language, religion and astrology.

As I began to review this deck, I quickly understood it was going to be a highly complex, challenging study. I became very intrigued by the intricate symbols on the cards, and quickly realized I needed to obtain additional reference material on symbolism to help decipher the deeper meanings. Not only did the symbols require further study, but I found myself seeking additional information on the artwork which has distinct, cultural, historical and religious meaning. Each card contains a kind of secret code, which leads to a much deeper meaning and interpretation if one has the interest, motivation and patience to decipher through it.

The deck contains a unique twist because it has two cards in the deck which Dr Kazanlar refers to as "The Arcanum Without a Name." It replace the Number XIII card, Death. Plus there are two additional cards which are portraits of what appears to be a queen of Eastern European culture, and a King or Sultan of Middle Eastern culture.

The deck is very good quality, standard size and easy to handle. The artwork and colors are deep, vibrant and stand out on the gold background. The back of the cards are deep purple and have a lovely ebru art design which complements the Persian style artwork and multi-cultural deck theme.

The LWB included with the deck is very detailed and contains valuable information about the history, art, religion and symbolic significance of each card. The spreads recommended by Dr Kazanlar are large and complex, but fit well with the overall theme of the deck.

Overall, this is a very intricate deck, which is most likely suited for an advanced student and reader of the Tarot. I highly recommend it to anyone who is interested in Eastern European and Middle Eastern history, as well as the symbolic connotations and meanings.