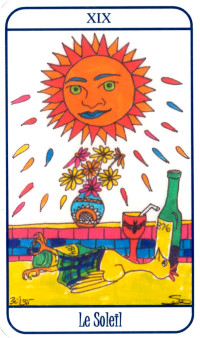 The Kilted Rubber Chicken Tarot is an off-the-wall deck from Beth Seilonen. It has 78 cards with rubber chickens in a hand-drawn emulation of Marseille-style decks. Self-published in a very limited and sold out edition of 35 decks. 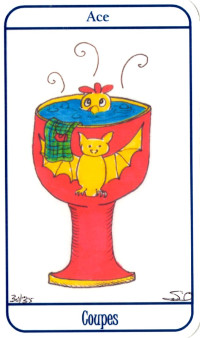 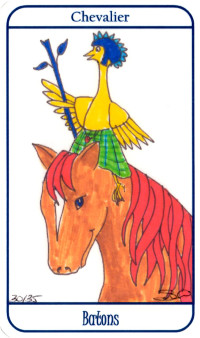 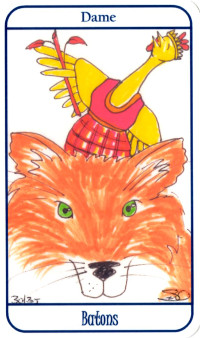 Well over thirty years ago, my then-partner was a senior executive with a handful of direct staff who controlled the seething masses of indirect staff. When they held a staff meeting, it would be just that handful; and my ex, when needing to underline a significant point, would reach into the bottom drawer of the desk, pull out a rubber chicken, and slam it on the table in rhythm with whatever was being said. So thirty years ago, I subconsciously recognised a desperate need for a Rubber Chicken Tarot.

Beth Seilonen, bless her heart, realised something about rubber chickens that I never knew until she pointed it out to me. A Rubber Chicken is missing something and will never feel complete unless it is wearing a kilt.

This deck is home-produced by the look of it, with a shiny laminate that forms a protective layer against all spills. With plain white backgrounds and delicate, cartoony line-work, the cards have a light, airy feeling perfect for chickens which, being birds, are creatures of Air. In an edition of thirty-five decks only, it is one of the rarest Tarots in the world. Beth has thoughtfully signed and numbered each deck (I have 30/35), and numbered and initialled each card within the deck. She has even more thoughtfully chosen to do so underneath the laminate, so the signatures and numbering will last as long as the cards.

Every card, even the pip cards, has a Kilted Rubber Chicken. Some of these look out of the card at you with a confused chicken-expression (and I've kept chooks, and know for myself what great intellects they have!), like the Four Coupes. Some dance with happiness, like the Four Deniers. Some snooze, like the Five Deniers. And others stand to attention, like the Six Epees.

The deck has some other interesting little quirks, like a bat appearing on the side of every Cup. Bats are creatures of Air, not Water. And many of the Kilted Rubber Chickens appearing in this suit, seem to be - er - greatly enjoying the pleasures of stuff that comes in Cups!

Many of the Majors are humorous, too: Le Pendu is true to gravity, and shows you what Rubber Chickens wear under their kilts. The Rubber Chicken-Angel in Le Jugement plays bagpipes, not a trumpet. Le Pape's acolytes are - what else? - eggs. The Kilted Rubber Chicken on top of Le Roue de Fortune is being pursued by rats, the bane of every backyard chook-keeper. One of the roads in La Luna leads directly to KFC, do not pass go do not collect $200.

I had this deck with me a week or two ago, when I met a friend for coffee. I told her about it and showed it to her, and she wanted a reading on the spot. Despite the levity of the concept, the deck functions well, and she got the reading she needed. After a few moments we both forgot we were using a "joke deck", and were immersed in a serious reading. So it is a very functional deck as well as a very pleasing one.

I would recommend this deck to anyone who wasn't completely dessicated - but unless Beth decides to republish, you will now be very lucky to get one at all, sadly.