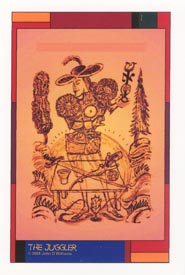 The Kingdom Highway Tarot was conceived as a book rather than a bundled collection of picturesque meanings. It is inspired by the Rider-Waite, the Marseilles, and other classic Tarots, and has 78 large-size cards. Now available as a hand-produced set from the author. 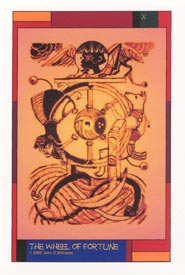 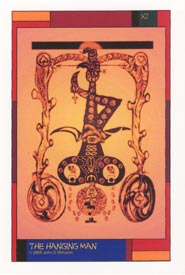 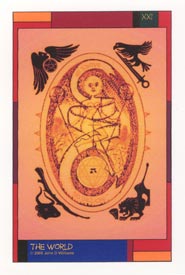 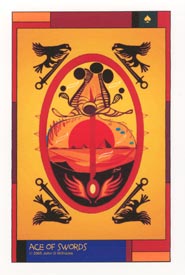 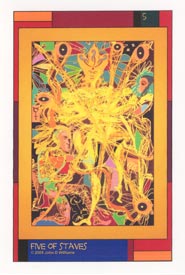 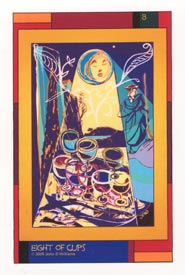 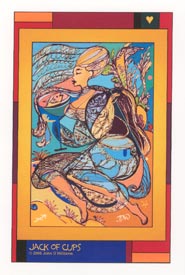 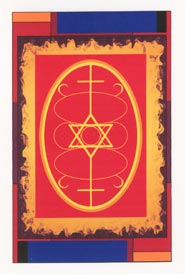 "Dedicated to Petrarch, the Estates of man, the divine Cosmos, the Virtues, the gamblers of Milan and Ferrara, the Visconti-Sforza family, Bonifacio Bembo, the immunerable wood cutters, Nicholas Conver and the city of Marseilles, Jacques Vieville, Court de Gebelin, Etteilla, Levi, Papus, Wirth, the Golden Dawn, the Anonymous of many and one, the legacy of Thoth, the Mamluk Empire, the Templar Knights, the Epher Yetzirah and the Holy Church, presented in 78 cards, the Royal Road, the Great Work, the Kingdom Highway." ~ JDW

The Kingdom Highway Tarot is a new, hand-made deck from Tarot scholar and commercial illustrator, John D. Williams. Conceived to be a book of Tarot rather than a ‘bundled collection of picturesque images’, it was also designed to be both an art deck and a working deck, and to blur the distinction between the two.

The initial impulse for the deck was artistic, as John was attracted by tarot’s use of symbolic imagery. The idea was to make “a tarot about tarot”, not to be a clone of existing models, but to reference the rich visual history of the tarot. John completed the cards in consecutive order to fulfill a spiritual journey, taking him through the history of the cards, thematically and visually.

Artistically, the style is ‘loose and intuitive’, and semi-abstract. The cards are complex pen-and-ink designs, that have then been altered and edited on the computer. They are somewhat abstract and busy at first, but resolving into a detailed tarot image after a closer look at the image. The art contains Renaissance elements, not just in costume, but in visual rules and illustrations of the period. It also has a modern American twist because of John’s own origins.

The design of the Kingdom Highway major arcana was guided by the Tarot of the Bohemian by Papus, deepened by observations by Anonymous (the author of Meditations of the Tarot) and guided visually by the Old Masters. Their titles are not Rider-Waite standard, but have more of an earlier historical foundation, influenced by the older Marseilles and Visconti decks. As it is here, in the oldest decks, the Death card was untitled though it retained the image of the skeleton with a scythe that we recognise. What is more commonly now known as the Magician card is here The Juggler, a translation of the Bateleur, the French title.


The minor arcana “bear a touchstone to the Rider-Waite-Smith cards, with some latitude in interpretation”. Each suit has a colour, season, and element, and is linked with an important era in tarot, and the pips are related to the Tree of Life according to John’s correspondences. The suits are Staves, Cups, Swords and Coins, and the court cards are Jack, Cavalier, Dama, and King.

The 78 cards are postcard size (four by six inches), and covered in clear laminate with rounded corners. The cards have an outer white border, then an inner border with geometric shapes coloured in red, orange, black and burgundy. The card number or suit symbol is in the top right corner, the title in English is at the bottom left, with John’s copyright message underneath. There are two extra cards, one with the dedication above, and a signed, dated and numbered title card.

Accompanying the cards are some photocopied pages explaining the concept and development of the cards (the companion book is to come at a later date). The pages gives more detail on the card associations, diagrams, Hebrew and Qabbalistic connections, and so on. It also compares the Juggler and the Lovers according to Papus, including two larger copies of the cards with each of the symbols on the cads labeled and explained.

The Kingdom Highway Tarot is an unique tarot deck with a solid underpinning of tarot research. It’s both an engaging art deck and a workable reading deck, by the author’s design and in reality.