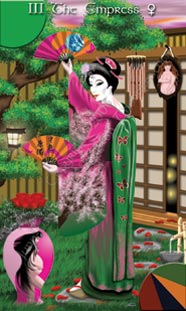 The Kingdom Within Tarot combines astrology, Qabalah, mythological archetypes, the elements, and the cyclical nature of the cosmos into 78 Tarot cards. The deck is designed for practical divination as well as self-knowledge. The set and very comprehensive companion book has been published by Schiffer Books.


Card Images from the Kingdom Within Tarot 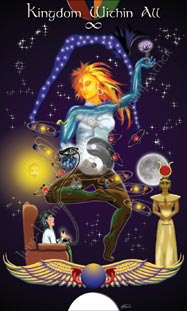 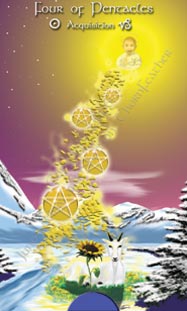 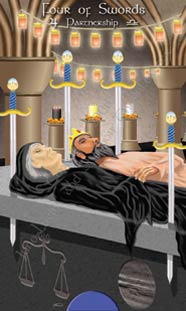 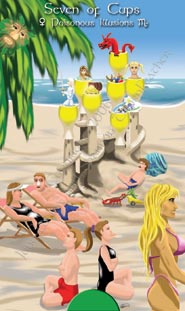 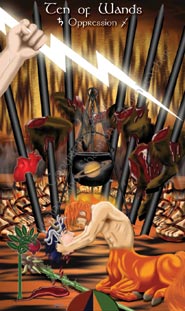 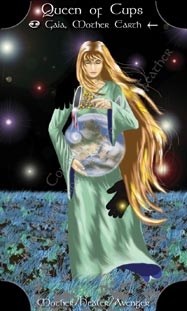 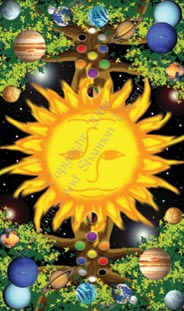 Kingdom Within Tarot Review by Solandia

The Kingdom Within Tarot is a dense, interwoven synthesis of astrology, Qabalah, universal archetypes, mythology and Tarot in a colourful deck of 79 cards. Juno Lucina, the deck’s conceptual creator, is a ‘poet, philosopher, and pilgrim’, who has shared the knowledge and wisdom gained from her studies in self-development to help others in ‘gaining awareness and confronting the truth of your life’s circumstances’.

Traditional Tarot symbolism is a only minor influence on the 79 vibrant Kingdom Within cards. Instead, astrological and Qabalistic associations are the foundation, both of the overall energy of the card and the individual artistic elements. The major arcana have been designed to visually illustrate both the astrological energies – the ten planets and twelve zodiac signs – and the 22 paths of the Jewish mystical Qabalistic system. The Qabalistic associations – which are non-traditional, following an alternative system created by one of Aleister Crowley’s initiates - are made evident by coloured spheres on the corners of the majors and court cards (or the edges, in the minors) and symbolize the placement of the card on its path between the spheres in the Qabalistic Tree of Life. The extra card in the deck, the un-numbered 23rd major, is called ‘The Kingdom Within All’, and rather than illustrating one single path on the Tree of Life, it encompasses the entire Tree and stands for infinite possibility and eternity.

The minor arcana have been ‘crafted to incorporate within its imagery the astrological correlation, Qabalistic association, seasonal celebration and spiritual cycle story that relate to each suit’, which sounds complicated but as in many other decks, they depict the ups and downs of everyday existence. They are also linked with the seasons, with Pentacles as Winter, Wands as Spring, Cups as Summer and Swords as Autumn, as are the multi-layered court cards. Illustrated with characters from Western myth and spirituality – Father Time, Dionysus, Mary Magdalene, Persephone – they are also linked to the Myers-Briggs personality sorter. The figures from the courts appear throughout the minor arcana, either as themselves or as a supporting character in the scene.

The illustrations by Shannon Thornfeather, a self-taught intuitive artist, practicing ceremonial magician and student of metaphysics, have been created to reveal the energy of the card in its imagery, as well as its esoteric correspondences. Visually, the images have computer-generated and collage style artwork in very saturated colours – hot pinks, deep purples, greens and yellows. Each scene is thick with crisply outlined detail and colour, and there is a wide array of symbols competing for attention. Most important are the card’s planetary sign attributions, which may appear as an actual image on the card or as a symbol. It’s sometimes subtle, as with the tiny Saturn symbol on a child’s drum in the World, or integral to the scene; as in the Tower, where a flaming image of Mars is crashing into the top of the tower.

In theme the cards span cultures and eras, with scenes of myth and legend – satyrs, winged centaurs – next to very modern images. The Lovers watch themselves in a romantic movie on a cinema screen. The Chariot shows a mini-van in front of a contemporary-looking bungalow; the Hermit is a bespectacled man in his office, surrounded by books of philosophy and religion; and the Seven of Cups has become a white, sandy beach populated by families and bikini-clad babes.

The cards vary in their tarot familiarity. Some cards have only minor modifications from traditional tarot symbolism: The Devil is one of the most familiar, and shows two people chained to her pedestal - but they are also chained to small scenes of drink-driving, abuse, burglary, adultery and lying in a very visual reminder of the dark side of the card. Other seem familiar in mood and scenery with some fundamental differences to the scene; the Four of Swords, which is very similar to the Rider-Waite scene but for the addition of a second prone figure lying on the bier. Others - the majority of the deck - make complete departures from the familiar in order to illustrate the esoteric associations, and cross the line between reality and fantasy. Puck, looking rather similar to a green gremlin, appears in the otherwise regular-looking Three of Cups and Nine of Cups, and there is an eerie crowned, blue figure sitting at a well-stocked table in the Seven of Swords.

The set has been published with borderless, large-size cards with a glossy laminate, and packaged in Schiffer Books’ usual high-quality, sturdy rectangular box. There are really two companion books to the Kingdom Within Tarot, the smallish book packaged with the cards, and the separately-available book, The Alchemy of Tarot: Practical Enlightenment through the Astrology, Qabalah, and Archetypes of Tarot. The 176-page companion book in the set doesn’t bother with tarot history or any beginner content (wisely, as this isn’t a deck for beginners). It simply explains the concept for the deck, then offers the card meanings and a few tarot spreads.

The latter goes into much greater detail of the foundation of the Kingdom Within Tarot, and delves deeply into the astrological and Qabalistic influences behind the images, exploring the links with Frater Achad’s Restored Tree of Life. This book may used with any deck, though it’s illustrate with Kingdom Within cards and is best read in conjunction with it. (There is a little overlap in some of the card meanings, but generally the two books are complementary).

The Kingdom Within Tarot is a deck of depth and knowledge, with multi-layered imagery that encompasses astrology, Qabalah, European myth and legend, and modern life. It is a differently constructed tarot and it takes some study and time to become familiar with its system and imagery (a good pre-existing knowledge of astrology would speed up this process), but it offers rewarding insights. “Use the Kingdom Within Tarot deck to artfully craft yourself into the joyful masterpiece you are meant to be.”

“The Kingdom Within Tarot” was brought into being to facilitate a visual journey of the archetypes through the Tarot, based on the ancient systems of astrology and Qabalah, In the introduction, we are told that through working with this deck we will begin to remove our own spiritual blindfolds that hold us back from seeing the truth. Everything that is needed to read with this deck is included with the deck/companion book kit. For those wishing to do a more in-depth study, the author has written a more comprehensive book, “The Alchemy of Tarot: Practical Enlightenment Through the Astrology, Qabalah, and Archetypes of Tarot”.

It would probably be a good time to note here that the Paths on the Tree of Life as expressed in this book do not correspond to the traditional Paths as they are presented in most metaphysical texts. The system followed here is based upon that presented in the “Restored Tree of Life”, as presented by Charles Stansfield Jones, an initiate of Aleister Crowley. This material can be found in “Q.B.L” (also known as “The Bride’s Reception”), and “The Egyptian Revival” (or “The Ever-Coming Son in The Light of the Tarot”).

This deck works as a tool of divination, but it is also a tool for the study of life, and for reuniting the reader/Seeker with their own “Kingdom Within”. The deck carries traditional titles for the Major Arcana, with Strength at VIII and Justice at XI. The Minor Arcana suits are entitled Wand, Cups, Swords, and Pentacles. The Court Cards are entitled King, Queen, Prince and Page.

What we see here is a modern approach to the Tarot, and its mysteries. Incorporated in this book are astrology, archetypes, the “Hero’s Journey”, a correlation between the Court Cards and the sixteen Myers-Briggs personality types (I loved this!), and Qabalah as seen through Achad’s Restored Tree of Life.

The deck and 176 page companion book come in Schiffer’s now trademark hard cardboard box, complete with a lift top, magnetic closure, and ribbon on either side to prevent the top from opening too far back (which would break the spine). The text and graphics on the top of the box are repeated on the front cover of the companion book. This is a very quality presentation! The Major Arcana are presented with a large black and white scan, the card title and Path, a description of the illustration, the astrological meaning, key phrases, and upright and reversed divinatory meanings.

At the end of each section (Major Arcana, Court Cards, and Pips) there are pages for taking notes. At the end of the book templates for the following spreads are presented: the Triangle Spread, the Cross Spread, Yes/No Spread, Timing Through Season and Timing Through Astrological Signs.

The cards themselves are 3 ˝” by 5”. The backs show a sun with a smiling face in front of a tree with leafy green branches. There are stars showing in the dark sky, and planets in the tree and on the ground. I was tickled to see that as intricate as the image is, it is reversible!

The card faces are drawn to the edge, without borders. The imagery is strong, making use of intense color, and is computer generated collage.

Major Arcana show the card Title, card number (in Roman numerals), and the across the top of the card. In the upper left hand, and lower right hand corner colored spheres correlate to that cards Path on the Tree of Life. The emphasis for the Major Arcana is the 22 Paths on the Tree of Life. There is an added card in this deck – numbered 23, and entitled Kingdom Within All. It has no Path, Hebrew letter, or planetary attribution,

At the bottom center of each of the Minor Arcana cards is half of a colored sphere, representing one of the Sephirah on the Tree of Life. Across the top of each numbered card are the card number (in text) and suit, with keywords underneath. Some of the imagery in this deck is traditional, some is not. The Fool is quite an interesting figure, surrounded by crackling energy, with a bow floating under him, as he steps off a planet, and a swan, pierced by the Fool’s arrow, plummeting down in front of him.

The Empress shows a lovely Geisha in a Japanese garden, while the Chariot is an oh so modern minivan, complete with mother driving her children into their driveway, while her husband stand welcoming at the door.

The Page of Pentacles ( the Newborn King) shows a cherubic baby in a cradle. The Magician shows the stern face of the planet Mercury, surrounded by eight doves and raised upon a dais with a rapt crowd in front of it.

This deck could be used by any level of Tarot student, and would appeal to younger readers/Seekers especially, because of its updated imagery. Things to take into consideration when reading with this deck include the foundation (the Revised Tree of Life), and the tri-level interpretation of the Court Cards. (The author does strongly recommend interpreting the levels in a specific order – Level of Power, Sign Correspondence, and actual people.


Complete Details of Kingdom Within Tarot


Similar Decks to Kingdom Within Tarot