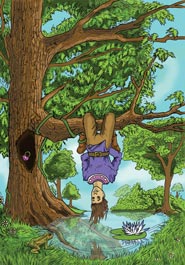 The King's Journey Tarot is based on the fool's journey of spiritual growth as he progresses through the trumps, and draws on alchemy, spirituality and the elements. There are 94 cards in this deck, including the normal 78 and an extra Spirit suit.


Card Images from the A King's Journey Tarot 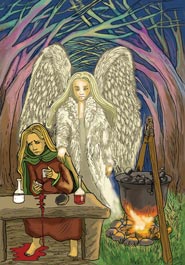 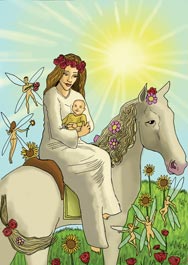 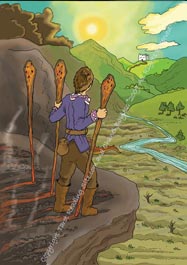 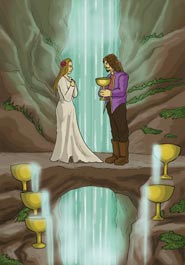 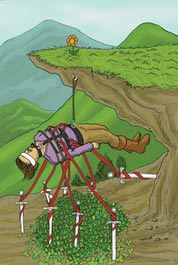 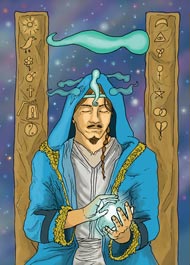 There are innumerable attributes of A King's Journey Tarot that have inspired me to write this review. From its delicious, whimsical and colourful images to the author's detailed explorations of the deck in the companion book, this is a deck that takes Tarot to a creatively and inspired new level. Chanel just throws everything into the mix! Dancing adeptly between the personal and the collective, she draws you into the magic of Tarot with Kabbalah and Celtic tradition and intersperses this with examples of how to interpret the cards in very down-to-earth, relevant and personal narratives. She has added useful pieces of advice such as how to pose an appropriate question of the Tarot, and how to determine "when" something is going to happen according the suits.

Chanel knows her work. She lives the Tarot. She sees examples of its teachings in every aspect of life and shares her insights in an easy to read, modern, fresh style. Colourful diagrams grace almost every page of her book and for those who find Tarot at times a rather dry read, I promise you won't find that true of Chanel's companion guide. Her enthusiasm for the discipline is palpable and contagious. For the new Tarotist, be warned! Chanel will ignite a thirst in you for more but you will be hard pressed to find another that can match her gift as a guide.

James has illustrated this deck brilliantly too. The cards are rich with colour and detail, done in my favourite style with no borders. They are like holding a stack of delightful little paintings and produced using quality card stock and finish. It's clear these two creative people have worked/collaborated closely to make such a harmonious package of deck and book. James and Chanel represent the new generation of Tarot Magicians. Savvy, generous and enthusiastic they will entice many in their generation to learn the Tarot's timeless and universal teachings. I anticipate their future publications with deeply felt appreciative excitement. Thanks to both of you for working so hard on a project that obviously took years to complete.

I acknowledge somewhat ruefully that I've had only words of praise in this review and the reader may wonder, "There must be something that could have been improved upon!" If anything I would say the cards would have been even lovelier if they had been bigger in size but that's really only a personal preference issue. Some people like a smaller size for manageability when transporting, handling and shuffling. In truth there is nothing about this lovely Tarot that could have been improved upon.