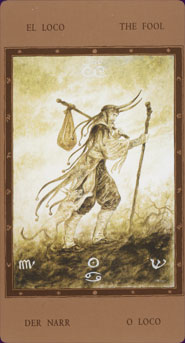 The Labyrinth Tarot is an art deck from Luis Royo, creator of the Black Tarot. The major arcana are finely detailed monochromatic art pieces, while the minor arcana suits of Wands, Pentacles, Cups and Spades are decorated pip cards.


Card Images from the Labyrinth Tarot 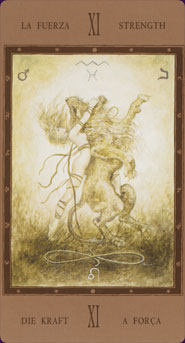 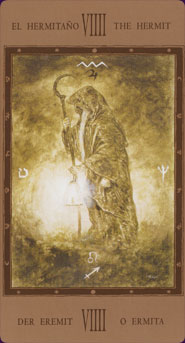 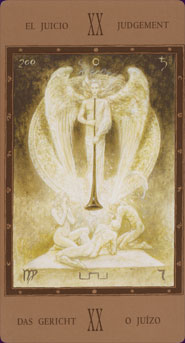 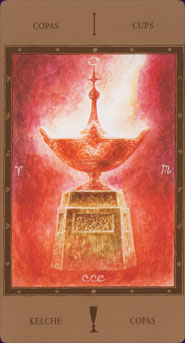 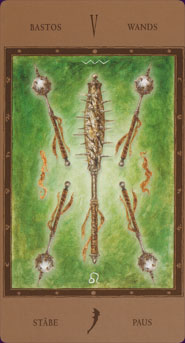 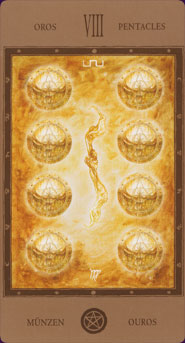 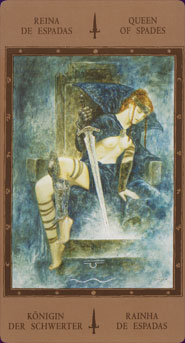 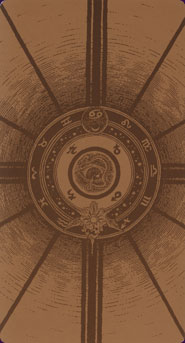 Many things can be said about this deck, but one thing stands out, it looks gorgeous.

The major arcana and the court cards are all beautifully illustrated in an enchanting style. The suits have their own colour, spades is blue, cups are red, wands are green, pentacles are golden while the major arcana are all in a dreamlike sepia/ greenish colour. Luis Royo seems to have tried to balance out the gloominess and obvious eroticism of the Black Tarot with his labyrinth deck, where the Black Tarot is at times nightmarish, the labyrinth is dreamy, all the while paying close attention to more conservative imagery.

Because of this somewhat traditional symbolism on the cards this deck is very well usable for anyone who knows his way around the Tarot without having to consult the somewhat disappointing booklet. The pip cards, showing little more then the indicated number of cups, pentacles, wands (warrior maces) and swords, which are called spades in this deck, do keep it from being accessible or intuitive for absolute beginners.

The cards are rather small and even though this does influence the appeal at first glance, because of the smaller art work, it does make it a deck that is easily picked up for a quick spread. The cards are of a good quality and the printing is excellent. All cards, except Death are named in four languages and numbered (though the fool has no number instead of a 0) and the minor arcane are identified by a small symbol, though there will be no confusion there anyway.

I have done several readings with the cards and what I noticed very early on is the uniqueness of each card which makes it very easy to "get to know" the deck, next to that the deck is very inviting to just look at, so I gave it a lot of attention which added to the speed of the process of getting to know the deck. The cards seem to "speak" clearly, sacrificing subtlety for directness. To me it felt very similar to a Rider Waite deck in that way, even though Justice is situated as the eighth card, because of its uncomplexed “feel”, though this is a highly subjective and personal feeling.

Readings with this deck, up till now have been clear and querants have reacted very enthusiastic. There will often be a preference for traditional cards, but this deck, in my opinion gives a very interesting alternative for people willing to take a peek at other possibilities without having to take too big a leap.

There are supposed to be several sets available, but I have only seen the limited edition up till now, which gives you a very nicely illustrated box and a small booklet containing it’s number (mine is 254 of 2500) and some beautiful sketches of which the first page is signed. There is some nudity in the deck, the penis of the devil and hanged man are clearly visible and most females have bare chests, this however is done in a very un-provocative way, keeping it stylish or romantic rather then erotic. Though it is clearly recognizable as Royo’s art, it is for lack of better word, much “softer”, which I think for this deck was a good choice making it both more accessible as well as less provocative or distracting.

An odd thing I have noticed about my deck is that my Emperor is labelled Empress, which is clearly a misprint, because the German, Italian and Spanish(?) translations clearly state Emperor, besides that the booklet makes no reference to two empress’ but clearly state Emperor as the fourth card. Which makes this limited edition easily recognizable for collectors.

Overall this is a deck I find both enjoyable as well as useful, with enough quirks to keep things interesting, like the lack of a name on the Death card and the choice for using the word spades instead of swords. More traditional then one would expect yet still one of the most interesting fantasy art decks, a real addition to any collection as well as a good second step on the path of learning the Tarot, and of course a must have for any Royo fan.