Tarot in the Land of Mystereum 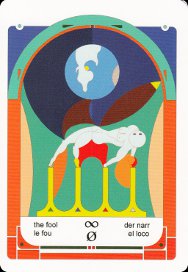 Tarot in the Land of Mystereum is a visionary tarot, created to inspire imagination and establish "harmonious relationships with your ideas and feelings". Previously self-published by Jordan Hoggard as the Mystereum Tarot, this is his expanded deck-and-book set from Schiffer Books.


Card Images from the Tarot in the Land of Mystereum 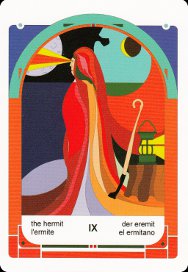 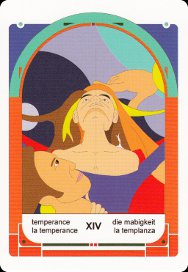 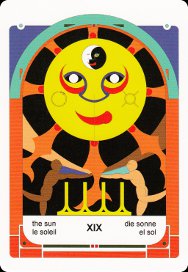 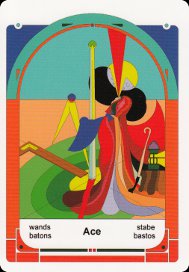 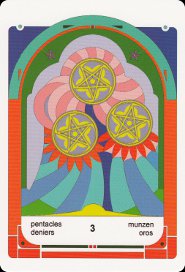 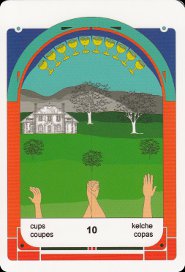 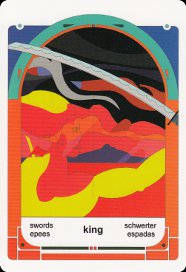 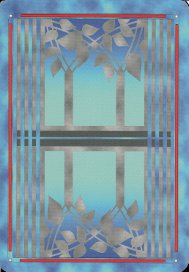 Tarot in the Land of Mystereum Review by Bonnie Cehovet

Meditate Your Contemplation,
Contemplate Your Meditation -from the book

“Tarot in the Land of Mystereum” is based on architect/artist/Tarotist (can we just say Renaissance man!) Jordan Hoggard’s independently published “Mystereum Tarot” (2008). Created with the vector technology found in his architecture background, the “Mystereum Tarot” showed a strong sense of (geometric) form, backed up with an intense use of color. The deck has been revised to a small extent for “Tarot in the Land of Mystereum”, primarily to take out the nudity so that the deck would be able to be used with children (or with adults that have amore conservative mindset).

There was a significant shift in thought with “Tarot in the Land of the Mystereum”. The working concept here is “Imagination Primer”. The Tarot, and the journey that is the Tarot, is meant to open the Seeker’s ability to imagine, and to develop their ideas. The Seeker is also the Guide, in the guise of the Fool. The aim is for the Seeker to develop a harmonious relationship with their ideas and feelings. Life in a nutshell!

The deck is a traditional 78 card deck, with Jordan’s suggestion that the card back become the 79th card. There is a reason for this – the card back (which is reversible) shows a window with a vine running across the top of it. It acts as the window into our imagination, and into our soul. (The last little thought there was mine.) Traditional titles are used for the Major Arcana, with the suit titles being Wands, Cups, Swords and Pentacles, and the Court Cards titles of King, Queen, Knight and Page. Justice is VIII, Strength is XI.

The presentation for this book/deck set is awesome! When I first saw it, my thought was “How am I supposed to store this?” That lasted for a very fleeting second! The reason for the thought is that the box is cigar-style, approximately 5 ľ” by 11 ľ” – game board size. Well, duh! It is meant to be a game … a journey! The box is perfect! It is a flip top box, with a magnetic catch. No worries about anything falling out if it gets accidentally knocked over. The colors are the vibrant colors from the deck, with the imagery from the Hermit, the Six of Pentacles, the Ten of Wands and the Two of Swords. There are ribbons on both sides of the top, so that it does not open further than it needs to (which could crack the spine). The front features a ribbon pull to open the box. Very professional, very beautiful! Go Schiffer!

The 192-page companion book is entitled “An Imagination Primer”. The Welcome section presents the thought behind the deck, and its use as a tool to develop imagination and creativity. Each family within the deck deals with a different aspect of imagination. From the book:

There is an exercise at the end of the Welcome section that is really very interesting. Using a rubber band, you form a circle, and then you twist the circle to form a lemniscate (infinity symbol). Jordan goes on to suggest that the center of the circle is not necessarily the middle of the circle – it is where we are on our journey, and it is that which is vibrant and alive.

There is an interesting set of questions to ponder at the very end of the Welcome section. It is suggested that the Seeker think about them before reading the book, and then again after they have met the characters along the journey that is the Tarot. Sample questions include:

"Does infinity have a middle?
What is an infinite feeling?
Is there a difference between a center and a middle?"

The cards are presented with a black and white scan, a description of the card’s energy, Entering the card (each card speaks in its own voice), and Imagination Tools. Examples of Imagination Tools are:

“The Fool: Feel and remember natural new directions you create as you move as you move and evolve your ideas with imagination and creativity!”

“Ace of Pentacles: I gift you the ability to sense inner inheritances as they prepare to come to light.”

“Queen of Cups: I am in harmony with my emotional and intuitive realms.”

The cards themselves are 3 ˝” by 5”, and of good quality, glossy card stock. The backs I have already described. The card face has a Ľ” white border, surrounding a “window” that frames the card’s imagery. The bottom of the border, and the lower 2/3 of each side of the border are orange. The upper third of the border is blue/green, and curved. The upper right and left hand corners are dark blue.

The colors in this deck are both vibrant and intense. There is significant imagery from the esoteric world, and an interesting continuity of imagery throughout the deck. The Hanged Man and the Page of Cups are the same person. The rope that ties the figure’s hands runs through a lemnescate,with another lemnescate appearing behind the figure’s head. The imagery of the four pillars appears in several cards – the Fool, the Lovers, the Devil, the Tower, the Sun, the Two of Swords, the Knight of Pentacles, and the Knight of Cups.

The imagery on the Court Cards is interesting: for the Queens, the figures are identical on Pentacles and Swords, and on Wands and Cups. The King shows the same figure on all four suits, while the Knight shows the same figure for Cups, Swords and Pentacles. The Pips (numbered cards) are semi-Marseilles style, in that they make use of the suit icons and limited figures.

The Fool shows black holes where the eyes appear, very much like Johanna Gargiula-Sherman’s work in the “Sacred Rose Tarot”. The Emperor is shown as a figure in the middle of a tree, while the Wheel uses watch-like imagery and astrological glyphs. The Tower shows the Fool poised over the four pillars in the upper left hand side of the card,, with the vibrations from his voice acting as the lightening that strikes the Tower.

To know the depth of this work, and the intention, I am going to share Jordan’s acknowledgment statement, from the book: “Susan B. Hale. You gave me two lithographs when I was three months old. I cherish them. They have lived with me since.” If you want to wander into the land of imagination with intent and purpose, this book and these cards are for you. Suitable for any age group, from any background. I see this deck as being akin to James Wanless’ “Voyager Tarot”. It opens the mind, and the soul.


Complete Details of Tarot in the Land of Mystereum


Similar Decks to Tarot in the Land of Mystereum

Home > Decks > Tarot in the Land of Mystereum