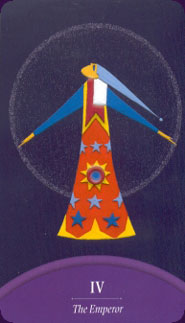 The Lars-Kristian Holmsen Tarot is a 78-card deck that simply goes by the name of 'tarot', published in Norway. The art is stark, with very colourful elements on a dark purple background, and pip style minor cards. 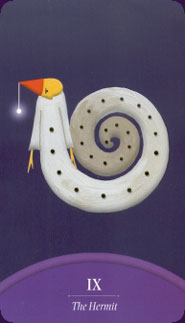 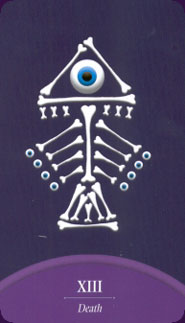 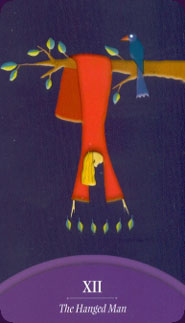 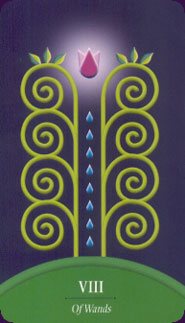 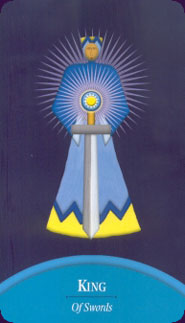 The Lars-Kristian Holmsen Tarot is an inviting, inexpensive deck-and-book combination which is suitable for all ages. The artwork is reminiscent of children’s book illustrations: simple, brightly colored, and a bit whimsical. (The Lithuanian artist Vaida Gastiunaite has also illustrated a book of Hans Christian Anderson stories.) Although the artwork is stylistically simple, it very effectively and creatively captures the archetypal essence of the Tarot cards. In its style and cost it is similar to the Tarot Nova deck from Running Press.

The deck is not really “named”, but is simply called “Tarot, by Lars-Kristian Holmsen” on the packaging. (I call it the H-G Tarot, short for Holmsen-Gasiunaite.) The deck and companion book are packaged in a book-like cardboard case, which is secured with a dark green ribbon. Inside the case on the left are two wells for the cards, and on the right is a well for the 114-page hardcover companion book.

The cards are a typical size (2 11/16 x 4 5/8 in., or 118 x 68 mm), on a light but flexible card stock. They have a glossy finish, and my main critique is that they tend to retain smudges. There is a tendency for the cards to stick together in a fan spread, so an application of fanning powder is helpful.

The backs are a dark purple with a green and lavender 8-spoked geometric star design, with green leaves at the end of each spoke. The backs have a uniform pattern, and thus are reversible.

The Majors and Minors are color coded with a semicircle on the bottom of each card, listing the card # (in Roman numerals) and title. (Majors are purple, Wands dark green, Cups burgundy, Swords turquoise blue, Pentacles light green). The Minors follow the common elemental attributes of Wands = Fire, Cups = Water, Swords = Air, and Pentacles = Earth.

The Majors depict fresh and fun aspects of traditional Tarot images. Many of the male figures in the Majors have conical hats, perhaps to symbolize the progression of knowledge or awareness funneled to the wearer : the Fool, Magician, Emperor, Hierophant, the male Lover, Hero (Chariot), and Hermit.

Some of my favorite Majors include:

The Emperor, tracing a circle boundary around himself, reminiscent of Da Vinci’s. Vitruvian Man.
The Hero (or Chariot) which is the only departure in name to traditional decks. The Hero rides in the gondola of a balloon, dreamily leaning over the edge carrying red and yellow streamers.
The spiraling snail-like Hermit.
The Hanged Man, flattened and hanging from a tree limb like clothes drying on the line.
Death, a ritual arrangement of bones and eyeballs!


The Minors are creatively arranged pips, depicting the appropriate number of element symbols in geometric/dynamic patterns in a modernized Marseilles style. Like the Marseilles, at first glance they appear quite simple and thus uninspiring, but upon contemplation they reveal progressive and evolving numerological patterns.

The court cards are subtle yet distinctive, and show a consistent approach within each court level. The Pages are represented in the midst of action with their element, the Knights are at attention proudly demonstrating the strength of their suite, the Queens carry two of each symbol in harmonic balance, and the Kings stand upright, regally bearing the element symbol.

The companion book by Lars-Kristian Holmsen is excellent, presenting an inviting and easily digested overview of Tarot and its use. Each card is illustrated with a full-page write-up of the card. Holmsen’s text is not specific to the illustrations for this deck, but rather contains universal insights about the card’s energies and potential meanings. So the nuances of the particular images on the H-G Tarot cards are left for the reader to divine for themselves.

Holmsen provokes fresh ideas or questions to ponder in a “For Reflection” section for each card. Some examples:

The Wheel of Fortune: “Am I prepared to be moved by life? Am I able to experience continuity under different circumstances?”
Knight of Wands: “How much of my energy, my power and my passion is for show, and how much is used to achieve an interior refining and transformation?”
Three of Pentacles: “Do you think that everything you do must be useful? Or do you sometimes allow yourself the sheer joy of watching something come to life between your hands?


The Lars-Kristian Holmsen Tarot is modern yet traditional, playful yet insightful, and very affordable and rewarding. I would recommend this deck and book for beginners or for Tarot enthusiasts looking for a fresh and fun approach. The simple pip-style Minors may shy away those who prefer more scenic RWS-like depictions, but may attract fans of the Marseilles style. For the price, it is a great Tarot deck and book combo. I encourage you to seek out this deck, to “allow yourself the sheer joy of watching something come to life between your hands”!