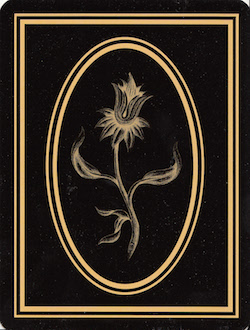 Le Tarot Noir is an elegant 78-card Marseille-style deck from French artist, Matthieu Hackiere. The illustrations are printed in a subdued palette, and in more flowing, finer detail than is typical for Tarot de Marseille imagery. Published with a guidebook in French. 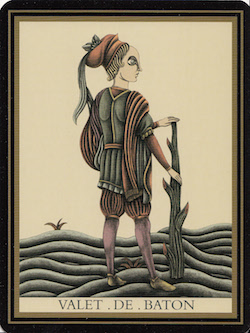 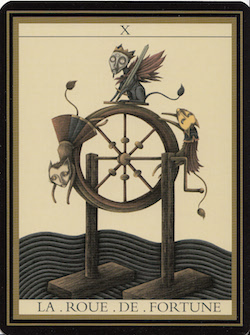 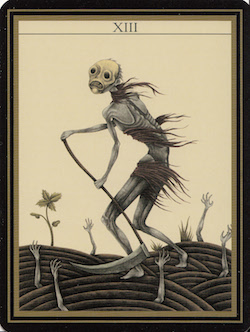 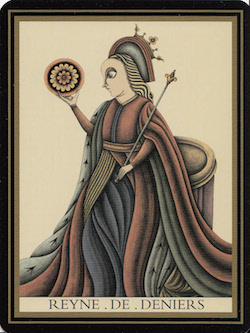 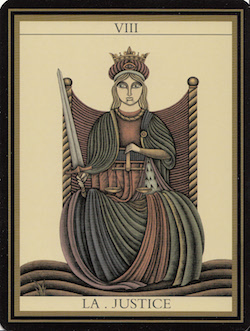 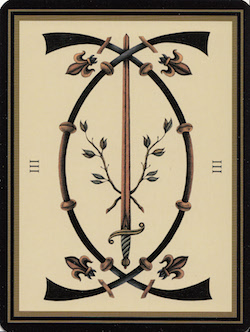 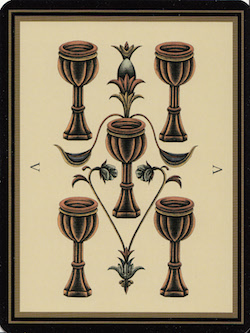 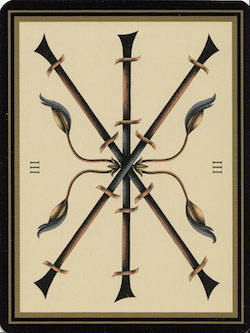 Many thanks to Alison Cross (reviewer extraordinaire!) for bringing this deck to my attention. I knew going in that I would be purchasing this deck directly from Mr. Hackiere, that it was a full 78 card, Marseilles style deck, and that the companion book was only available in French. I knew that I had to have it anyway!

It came wrapped so well that a sharp knife and I had a difficult time opening it! Needless to say, it got here in excellent condition! Included was a well-constructed, lift top box, a 128 page companion book (in French), and the 78 card deck. I fell I love immediately!

The cover to the companion book and the top of the box are the same: all text in gold, against a black background. The image of the Two of Cups is done in a lighter gold. Throughout the companion book it is the same – gold text against a black background. There is a short introduction, with the text for each Major Arcana card on the left hand page, and a full page, full color image of the card on the right hand side. The pips have a short write-up on each suit, and on the Aces. For Two through Ten of each suit there is an image only. The suits are Baton, Coupe, Deniers, and D’Epee. La Justice is VIII, La Force is XI. At the end of the book is a bibliographie.

Since there is not all that much text in the book, I am going to use an online translator to create the English version of this book. It will take time – but it will be worth it! From what I understand, the text leans more towards card playing than the divinatory aspect, so I am not losing anything by not rushing to do the translation.

The pips are Marseille style, showing suit icons only.

The Valet de Baton shows a figure standing, looking to the right hand side of the card (the future). Both hands are placed on an upright baton.

La Roue de Fortune shows a wheel with three animalistic figures on it. They all have tails, and the same face (almost like a mask). They are differentiated by their bodies, with the central figure wearing a crown.

Arcane XIII (which is not named in this deck, but is known as Death), shows a skeleton wielding a scythe as he walks through a field with arms coming up from the soil – and one lone flower in the background.

La Justice shows a female figure, wearing a crown, seated. In her right hand is an upright sword, under her left hand the scales of justice.

I found this deck to be very well done, with quality materials and presentation. I would not hesitate to use it in different ways, such as divination, meditation, journeying, card a day, personal growth, and storytelling.