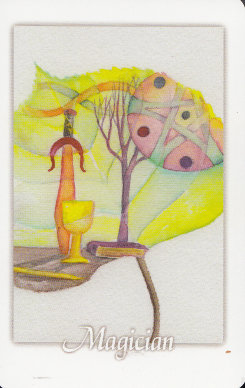 Tarot Leaves has 78 fully illustrated cards, each represented by an intricate leaf with hidden symbols and imagery. The theme was inspired by the artist's background in forested, rural Maine. The soft, pastel artwork is enchanting but non-standard, making it a deck for meditation and journeying, and the advanced reader.


Card Images from the Tarot Leaves 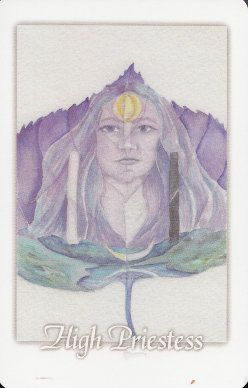 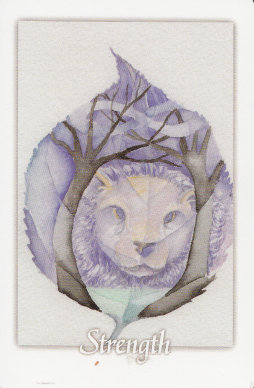 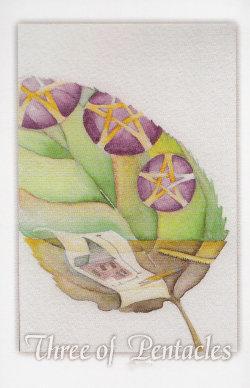 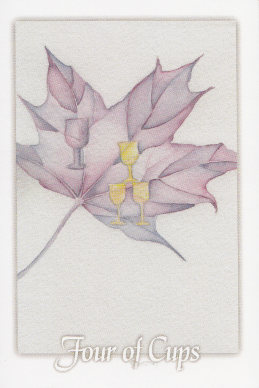 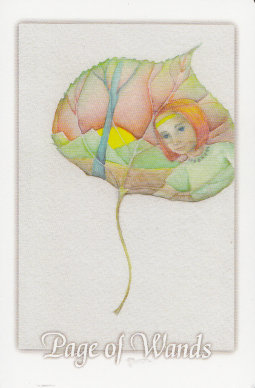 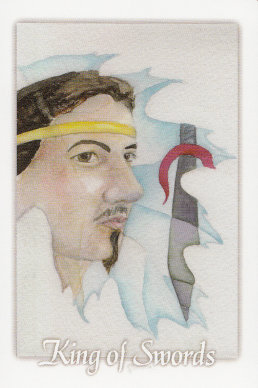 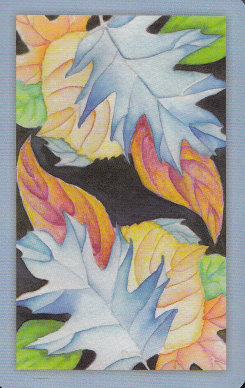 “Tarot Leaves” follows a traditional 78 card Tarot format, retaining the traditional titles, with Strength at VIII and Justice at XI. The suit names are Wands, Cups, Swords, and Pentacles, with the Court card titles of King, Queen, Knight and Page. The deck is formatted around the shapes of Apple, Birch, Maple, and Oak leaves, with the imagery of each card held within each leaf, which acts as a “window” into the card. Images are overlapped within the artwork to reveal hidden meanings.

Seilonen grew up in rural Maine, with the ability to wander through woods filled with pine, cedar, and evergreen trees. The trees became her teachers, and her connection with Spirit. This very gifted artist has brought this feeling of enchantment to this deck. The imagery and use of color combine to bring out the essence of each card. Some of the imagery is traditional, some is not.

The deck and LWB (Little White Book) come packaged in one of Schiffer's lovely magnetic lift top boxes. I love the secufre closure of the lid, and the fact that small ribbons on either side keep the top from over-extending when opened. The heavy cardboard box insures that the deck will be protected for many years to come.

The LWB is 96 pages, and is soft bound (as opposed to the looser style of literal white pages). There is a short introduction, then each card is presented with a black and white scan, and a short discussion of the qualities that the card carries. The reverse meaning is listed across the bottom of the page, but I literally cannot read them, as they are dark print against a dark gray strip.

At the end of the LWB two reading templates are presented – one for a Three Card Spread, and one for a Seven Card Spread.

The imagery in each card is two-fold – the form of a leaf that acts as a background for the card images, and the card images themselves. The colors used are soft pastels, which (for me, anyway) makes it hard to discern the imagery within some of the cards (unless looked at very closely). Symbols seem not to meant to stand out, but to meld together. The Magicians tools are on his table, but the Magician himself is not obvious. The primary figure in the Empress is a woman looking out at the reader, but if you look in the background you will see the symbol for the feminine. The High Priestess carries the imagery of the moon, as well as the white and black pillars, but you (almost) have to look for them. I did like the imagery at the third eye.

Strength shows a beautiful cat's face peering out from the middle of the card. The King of Swords is ensconced in the clouds, wearing a yellow headband, with a sword coming down from the clouds in front of him. The Ten of Swords shows a figure in the middle of the card, surrounded by ten brown figures at the ten points of the leaf. The Four of Cups shows three upright gold cups, and one upright lavender cup. The Three of Pentacles shows three pentacles along the side of a leaf, with what appears to be a paper and pen to the bottom and left hand side of the leaf.

There is some traditional imagery throughout the deck, including the symbol on the Hierophant, the wheel on the Wheel of Fortune, the Hanged Man hanging from one foot, and the two cups (vessels) on the Star.

While this is a beautiful deck, and one that lends itself to meditation and journeying, it is not a deck for someone looking to learn the Tarot. The artwork is beautiful, and it could certainly be offered to clients as a choice of reading decks, if the reader felt comfortable with it, but the reader would need to be familiar with the card meanings. This deck could also be used to good advantage in comparative reading, when one deck is used to perform a reading, and the same cards are drawn from a second, different deck to gain further insight.