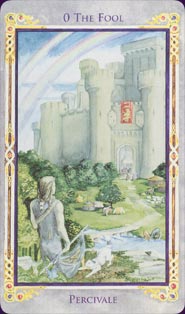 As the title suggests, the Legend: Arthurian Tarot is based on the myth of the Dark Age King Arthur, and his fabled court at Camelot. Each card has misty artwork surrounded by a grey border, and corresponds to a character from the legend. 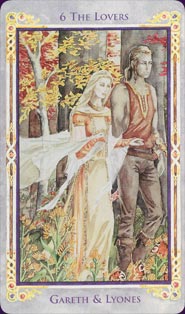 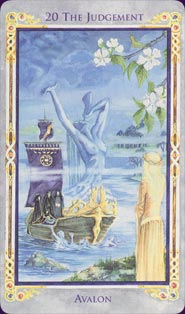 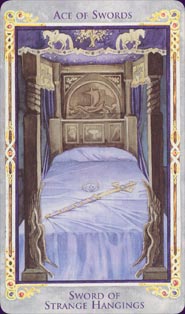 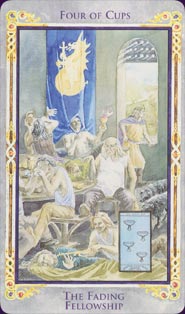 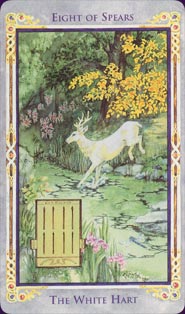 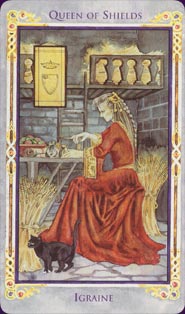 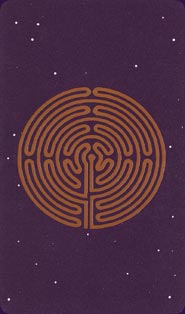 I have been interested in working with an Arthurian themed deck for some time now - but never got around to purchasing a deck. I had my chance on eBay - and I won the toss. (The only issue here is that I now have to purchase the book!) A romantic at heart, I dearly love the Arthurian legend - Arthur, Guenevere, Lancelot, Merlin, Morgana le Fay, the quest for the Holy Grail - the whole enchilada is a riveting journey, and I never want it to end!

As with all themed decks, the presentation is up to the author - it is their personal view of how the theme relates to the Tarot. IMHO, Anna-MarieFerguson has done a wonderful job of melding the Arthurian legend and the Tarot. Each card - Major Arcana, Pips and Court Cards, carries the traditional Tarot title (with the exception of the Devil, which has been renamed The Horned One), as well as a theme (which can be a person, place, animal or specific tale from the Arthurian legend). All of the Pages carry the distinction of being represented by animals.

The LWB (Little White Book) that accompanies the deck starts with a brief review of the Arthurian Legend, and goes into a little of the history of the Tarot. I highly recommend getting the accompanying book, A Keeper Of Words, also by Anna-Marie Ferguson, for a more in-depth understanding of the Arthurian Legend, and how it relates to the Tarot. There are no scans in the LWB - the cards are presented with an interpretation, the reversed meaning, and a presentation of the theme for the Trumps; and an interpretation and reversed meaning for the Pips and Court Cards. The spreads presented in the LWB are the Celtic Cross and the Horseshoe (which includes the use of a significator, which I personally do not use).

Interpretation: Transformation. Death and rebirth. the end of an era or relationship. Freedom and renewal. A change of lifestyle. Feelings of loss. The natural course of events. Can indicate death or the fear of it, but more often points to a separation with the past.

Reversed: Clinging to the past. Resisting change. Continuing old habits and outmoded thinking.

Gwyn ab Nudd & the Wild Hunt: "Storm clouds breathe form to Gwyn ab Nudd and the Wild Hunt." Gwyn, son of Nudd, is the Wild Huntsman od Welsh tradition who blows his deafening horn and leads a spectral troop across the skies. As God of the dead, Gwyn was charged with collecting and protecting the souls of the dead, and so a sighting of the Wild Hunt was thought to portend a coming death. The riders of the Wild Hunt are said to be the ghosts of men who have fallen in battle, while the red-eared hounds who accompanied them were known as the cwn Wyhir, or hounds of the Underworld. The baying of hounds, the thundering hooves, and the shrieks of the horsemen that followed this awesome sight were said to scare evil away from the realm of Annwn (the Otherworld).

The cards are good quality, glossy card stock, 2 3/4" by 4 5/8". They are comfortable for use by those with smaller hands. The backs are a deep purple with tiny white circles that resemble stars in a night sky, with a labyrinth outlined in gold in the center. The card faces have a marbled gray background, with a jeweled border around the picture itself. The artwork is done in a very soft manner, with excellent use of color. The pips are all scenes, with a small insert that shows the number of pips for each specific card. The title and number of the card is in lavender across the top border, with the theme for the card in lavender across the bottom of the border. The Court Cards have a small insert showing the suit and crown or other headgear to indicate rank.

There is a wonderful fairy tale quality to the art in this deck. There are many cards that really appealed to me, but there are laws about these things, and they will only allow me to use a certain percentage of scans! The Ace of Cups is themed The Holy Grail - in the middle of the card we see a blue and gold cauldron, seated between two columns, with lightening emanating from it. Beneath the cauldron we see a circle of women wearing gold gown overlaid with blue robes. Definitely brings out feelings of mystery and enchantment!

Judgment carries the theme of Avalon, and shows a woman dressed in gold, facing the barge carrying the dying Arthur, with the form of a golden woman gracing the bow. The three Queens, dressed in gray, are at the back of the barge. In the background we see the image in the mist of a woman, arms thrown upwards, blowing a horn. In the upper right hand corner we see white flowers and green leaves.

The Chariot is themed Battle of Mount Badon, and shows two stallions, one white and one black, pulling a chariot with the charioteer's right arm raised with sword in hand and red cape flying behind him. In the left hand corner we see a bright blue banner with three gold crowns on it.

I found this deck very easy to use. It is a deck that I would provide for my in person client readings (I allow my clients to choose the deck of their choice). I highly recommend this deck for anyone that appreciates the Arthurian legend, and believe that those who do not know the legend would not take long to come to an understanding of it.

Being into late Roman/post Roman British studies, this deck was an easy like. It's a standard 78 card deck with no conceptual clashes with Rider Waite ideas. The little white booklet gives meanings and a brief note of the mythology behind each card. The artwork is quite beautiful, and rich. The Firedrake, and Castle Pendragon are favourites for me - but it is all pretty gorgeous.

Themed decks always have an issue - the theme has to be shoe horned into the tarot tradition - its not just a free for all. Arthurian stuff: 'The Matter of Britain', is large and rich enough to supply the archetypal material for the deck, but we are in the hands of the makers to determine which 'theme' icon matches the tarot.

In the Lovers, the myth of Gareth and Lyones doesn't fit for me; she was a gold digger only interested in Geraint (Gareth)when he proved he was a mover and shaker. The use of Taliesin for the Hierophant is, however inspired. A card of dogma and authority played by a poet and muse? Crazy 'till you realise that the poet WAS the transmitter of dogma in those days. The Hierophant as the translator of dogma, rather than a figure OF dogma is a new take on the Hierophant for me. Of course others may disagree - its the point of a themed deck to nudge you away from your traditional prejudices after all.

The cards are standard size, thin but perfectly ok stock. The imagery is beautiful, but would benefit from being larger for those with tired old eyes like mine, shrinking the borders or enlarging the cards would be good, and as the pip cards are named, putting an inset icon to identify the card is distracting and unnecessary - truly irritating to see the glorious picture of the nine of spears with a griddle shoved onto it!

The cards are more specific to the Arthurian myth than the 'Complete Arthurian' deck, so if you aren't familiar with the Arthurian world the little white booklet may not be enough - but the authors companion book 'A Keeper of Words' will surely help (though I only have the cards so can't be sure).

For me the deck works well for readings, the 'washed' colour scheme means neighbouring cards don't clash, and the rich detailing of the artwork pulls you in to aid with insight. A flawed masterpiece, but if you have any sympathy for the Arthurian world - a must have.