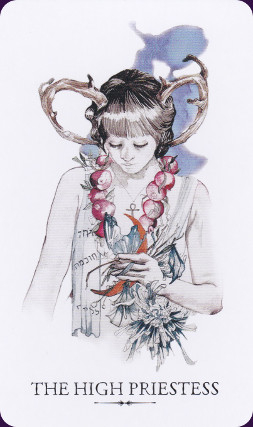 The Linestrider Tarot is a 78-card deck of linestriders - those who live their lives straddling two worlds, ideas, mental states or realities. This deck takes that concept and merges it with Rider-Waite style tarot symbolism to create beautiful and evocative cards.


Card Images from the Linestrider Tarot 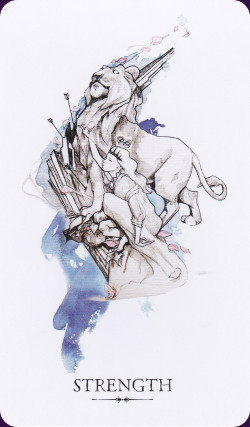 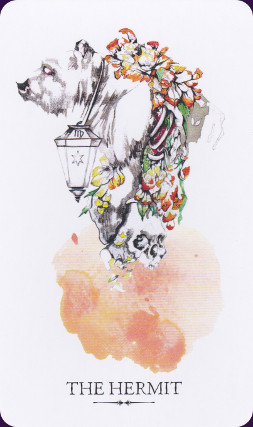 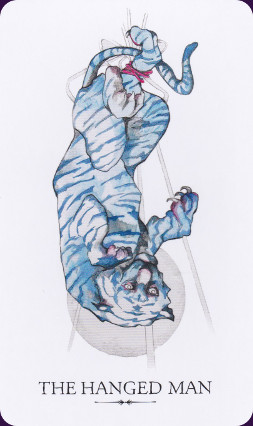 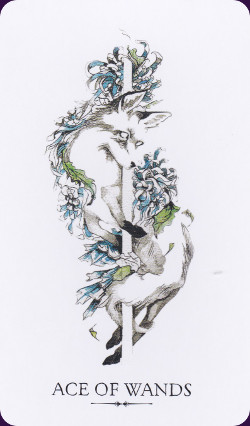 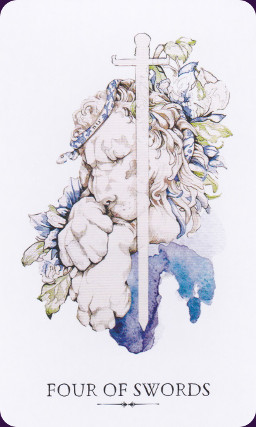 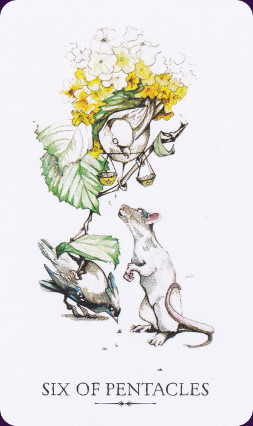 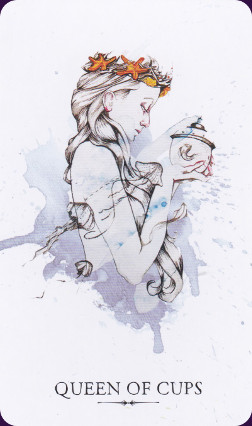 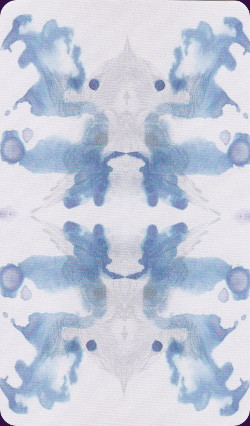 In folklore an edge separates the visible world from the invisible world on so many levels, and Linestriders are those magical people who seek to live their lives or draw their knowledge from both sides of the line, or edge. Linestriding is about walking lines that separate ideas, disciplines, mental states, worlds, and realities.

With solid foundations in the Waite-Smith tarot tradition, the Linestrider Tarot both expands and reduces the imagery of Pamela Coleman Smith's classic deck. Humans appear on roughly half the cards in this tarot, and it is animals that take up the slack, fulfilling the roles generally taken by humans in many Rider-Waite-Smith based decks. With an extraordinarily sensual and sensitive touch artist Siolo Thompson depicts humans as mysterious and dreamy, and animals as canny, intelligent beings.

This is a classic 78 card tarot, with 22 Major Arcana and 56 Minor Arcana. It is fully illustrated. The structure of the deck is conventional – there are no renamed Major Arcana, and the minor Arcana suits are Wands, Swords, Cups, and Pentacles. The Court cards consist of Page, Knight, Queen, and King.

The cards measure 70 x 127 mm which makes them a fairly average sized deck. They have a nice weight and fit easily into one's hands. The card stock is quite heavy yet flexible, with a smooth, low gloss finish. The print quality is very good. This deck has very finely detailed images with subtle and delicate colouring – which is perfectly reproduced. The artwork is an odd mixture of minimalism, watercolour, comic art, delicate pencil work, and realism/figurativism. The images have much open and blank background space; the foreground images are deceptively simple with layers of watercolour and pencil work creating symbols which are cleverly worked into the liminal-space-central-figures. The artist's palette is broad – lots of white, with sepia and grey being the primary colours used to define the images. The details have been added in a wide spectrum of colour – brilliant and fiery reds, oranges, and yellows, with pale pinks and lavenders, watery greens, and oceanic blues.

Given that the central illustrations exist in white space, effectively forming a vast border for each image, an actual clearly defined border would be both irrelevant and ugly on these imaginative and mysterious images. The design on the back of the cards – Rorschach-like watercolour blots over pale grey owls – is reversible.

The Linestrider Tarot and guidebook “The Linestrider’s Journey” come packaged together as a box set. The large white box is printed with images from the deck and information about the cards, however it is made of fairly flimsy cardboard which is not sturdy enough to withstand the rigours of frequent transport and rough handling. Nor is it a slim little package, rather it is quite bulky. The cards come wrapped in plastic but storage for the cards (such as a tarot box or purse) will need to be supplied by the card’s new owner.

The 274 page guidebook is written by the Linestrider Tarot’s artist and creator Siolo Thompson. 'About the Deck' explains the ideas behind the deck, detailing what inspired the concept of Linestriding. It also contains something of a potted autobiography from Siolo Thompson. ‘Handling the Deck’ gives the Seeker some tips on how to use and store the deck, including whom one allows to handle their cards. This is followed by some interesting information about ‘Reading the Cards’, which includes techniques such as Exalting Aces, and the influence of The Tower on readings, as well as a brief discussion about reading reversed cards. A sub-chapter on layouts covers a three-card spread, a five-card spread, and astrological spread; as well as numerology, and plant correspondences.

Each card has its own chapter featuring a black-and-white reproduction of the card and lengthy exposition on the deeper meaning of the illustration and its symbols. Divinatory meanings are given for both upright and reversed cards. While these meanings fall well within the bounds of conventional interpretations they are nonetheless insightful, wise, and compassionate. Each chapter closes with a short list of correspondences – astrological, numerological, and botanical for the Major Arcana; ‘Associated Birthdays’ replaces numerological correspondences for the Minor Arcana. The book’s conclusion is a graceful thank-you note to the new owner/purchaser of the deck, from the artist/author/creator of the Linestrider Tarot.

This is an absolutely gorgeous deck of imaginative and sensitively rendered cards. If you are looking for a deck that is not obsessively detailed but rather gives you the space to draw out your own visions then the Linestrider Tarot is perfect for you. If you are a fan of watercolour work, or just a beautiful art in general then have a close look at this deck. If you are looking for a tarot deck with plenty of animal symbolism then this deck is worth considering. While I would not recommend the Linestrider Tarot for absolute beginners, those with a bit of experience, or adepts and old hands will find this deck easy to master and a pleasure to use. The Linestrider Tarot is highly recommended.

Tarot decks are often quite busy. The classic Rider-Waite-Smith High Priestess card buzzes with visual alarms that would set the hair on fire of any freshman in an English, Art, Anthro, Psychology or Theology class. There's a woman in a blue robe, two pillars, a veil decorated with palms and pomegranate, a cross, a Torah scroll, the moon in various phases, and flowering water. The mind bounces from symbol to symbol, from one possible interpretation, one possible story, to another. There is virtually no white space on the card.

It's easy to understand why most tarot decks cram huge amounts of portentous imagery into the roughly fifteen-inch square surface of a card. Tarot has only a 78 card-vocabulary to depict the panoply of human experience: life, death, joy, suffering, and even just hanging out with friends.

Siolo Thompson's Linestrider Tarot takes a very different approach. Most of what one sees in most of her cards is white space. Does this amplitude of white space suggest a paucity of meaning? No. Images are cheap in our media-drenched world. We scroll past family snapshots and graphic photos of the latest atrocity. In this visual environment, well-done minimalism bids us to slow down and contemplate what we see. Thompson's is the kind of minimalism that communicates to the viewer: appreciate every detail. Look far enough, and you look into your own soul, and beyond it to the entire universe.

The Fool exemplifies Thompson's excellent use of minimalism. At first glance, the card appears to be an unfinished sketch – but even that first glance tells you that this is the sketch of a real artist. The lines snap and flow and all but take flight. Someone with great skill guided this pen. Recognizing the skill, your eyes pay closer attention, and you realize that this is a sketch of a striding figure. You can't tell if the strider is young or old, male or female; you can't identify nation or era. What is unmistakable is the bounce and determination in this figure's advance.

Actually it looks as if this is a photograph of a brave soul marching directly into bright sunlight, and the image is so overexposed you can't make out the traveler's face. Thompson's artistic illusion of overexposure emphasizes the brilliance of the sun, and the bravery, naivety, or folly of the figure marching so unhesitatingly into that blinding power. It's a minimalist card, but prolonged exposure to it – forgive the pun – repays the viewer with a new appreciation of the card's deeper meaning of fearless new beginnings in the face of formidable obstacles.

The Fool is primarily charcoal gray against a white background. A series of colorful daubs, some floral, some vegetative, fall in the shape of a long object. The querent can decide if this is a conventional bouquet or something magical and holy – a walking staff that bursts into bloom. This use of daubs of color within the confined borders of geometric patterns is especially well used in the Death card. Death is a human skull. Swirls of vegetation and the radial symmetry of flowers decorate the skull's surface. Life bursts, inevitably, from death. Most of the skull is black and white. Within a triangle-shaped portion of the skull, the swirls and blossoms burst into pink, gold, and blue. The triangle is often interpreted as symbolizing the female vulva, anatomy associated with generation and new life. Some of the cards in

Thompson's deck have human figures; others are animals. The animals are sometimes naturalistic, and sometimes fanciful. The naturalistic bunny on the Ace of Pentacles is both accurate and adorable. The Nine of Wands is a fox nattily attired in seventeenth-century neck ruff and breeches.

The influence of Greco-Roman statuary is evident in The Chariot. A laurel-wreathed human head rises above two horse's heads; all this looks very much like marble carved along classical aesthetics. The World is a shapely nude with the proportions and the coyness of a Varga girl. The Queen of Pentacles has tattoos. The boatman in the Six of Swords wears the hat of a Venetian gondolier. The Tower is a pagoda, typical of Asian Buddhist architecture. The Five of Swords is an armored knight.

Thompson keeps some Judeo-Christian elements. The High Priestess wears Hebrew writing. Traditionally she holds a Torah scroll. The Ace of Cups includes a traditional Catholic chalice. The Wheel of Fortune is so serenely composed and colored that just looking at it is soothing. Thompson uses restrained touches of lapis blue, charcoal gray and rust-red. Two exotic birds preen each other over lush blue and white flowers, with the wheel of fortune a circle in the center. It's so well composed, it should be hanging on a wall within a frame.

A couple of the cards didn't work for me. I'm put off by the Three of Pentacles, a card representing artistic genius. It's meant to be two ravens, although they don't look much like ravens, and they appear to be spattered in blood. Maybe a better illustration for the Five of Swords.

I was really curious about the Page of Pentacles, because she looks, to me, like a lady of the evening. She wears only stockings, a scarf, and a ribbon in her hair. What looks like a man in a dunce cap crouches servilely at her feet. This image is reminiscent of Bruno Szulc's erotica. The companion book did not inform me as to why Thompson chose this image for the Page of Pentacles. The book does, though, list astrological, numerical, and botanical correspondences for each card. She associates the Page of Pentacles with the numbers 5 and 68, the dates December 22 through December 28, and the plants cashew, blue flag, and cinnamon.

Card backs are an inkblot in denim blue, grey, and off-white. They are fully reversible.

Thompson says of herself that she was raised Christian, "but as soon as I was old enough to really think" she rejected "the monotheistic God" and connected with "the stars, the planets, and the animals." She "traveled a lot" and adopted an eclectic assortment of beliefs. She acknowledges that "all these things might sound a bit like purple wind chime mumbo-jumbo" but she says that "at its root" tarot is "a cognitive tool much like meditation or talk therapy" and the cards are "beautiful, collectible objects."

Siolo Thompson's Linestrider is exquisite, elegant, and unique. Its beauty and balance suggest a depth and an intelligence behind each card.