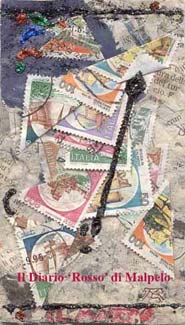 The LiteraTarot Europa is one of the group of collaborative decks with a literature theme from the Museo dei Tarocchi. This one is by European - mainly Italian - artists, and is a limited edition, majors-only deck.


Card Images from the LiteraTarot Europa 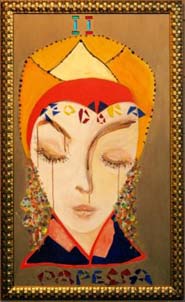 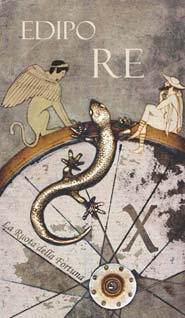 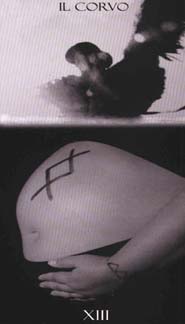 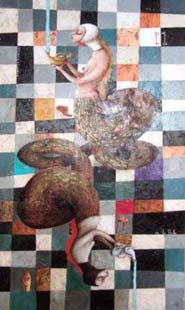 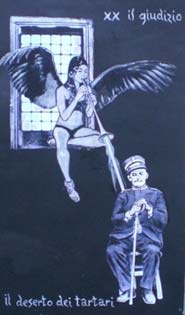 The Museo Dei Tarocchi – Hermatena presents several decks each year – some collaborative projects, some from individuals. “LiteraTarot Europa” is a collaboration from European artists (mainly Italian) that was published in the spring of 2009. Twenty-two artists chose books from literature as the theme for their individual cards. This is a Majors only, limited edition deck (300 copies), done on good quality cardstock. It is presented in a book-like wrapper, with covering folded up from both ends so that the cards do not fall out. The wrapper is held together with ribbons secured to the front and back covers.

The artists, and the literary works that they based their cards on, are as follows:

* Note: The cover art was done by Jessica Angiulli and Lucio Mondini.

The cards are approximately 2 5/8” by 4 ľ”. The backs of the cards carry a Ľ” white border. Surrounding the red and yellow (reversible) design that the Museo uses with some of their decks. The card faces show the card name, number, and book (in either Italian or English). The art styles used in this deck include paintings, pen and ink drawings, photography, collage or mosaic. The original artworks for this deck can be found in the Museo de Tarocchi in Riola, Italy.

My favorite card from this deck is Matto (The Fool), which is a colorful collage of postage stamps. L’immortale (The Magician) is a stunning card that shows you something new each time you look at it. I loved the colors in Papessa (The High Priestess) – done largely in orange and yellow, showing the face of a female with her eyes closed. Carro (The Chariot) goes modern, showing two individuals in a car, with a male figure standing in front of it, looking out at the reader. Ruota di Fortuna (The Wheel of Fortune) shows a male and female figure seated on top of the wheel, with a lovely Gekko-like figure hanging on to the wheel and watching them. I found Morte (Death) to be interesting in that it included two Rune graphics: a large graphic of what appears to be a piece of stone, and a much smaller graphic on the wrist of the individual holding the stone.

This deck will appeal to those interested in art, to deck collectors, and to those interested in Majors’s only decks. While each card has been done by a different artist, it is still a deck that can be used for reading. I do hope that the curators of the Museo de Tarocchi continue this tradition of producing decks on a yearly basis. It gives artists a chance to be known, and the Tarot public a chance to view (and work with!) some very creative decks.