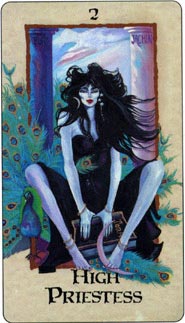 The figures in this somewhat gothic, self-titled Tarot deck, the Londa Tarot, are all pale and elf-like. The minor and major arcana cards look basically the same, though the deck uses the typical Rider-Waite card meanings.


Card Images from the Londa Tarot 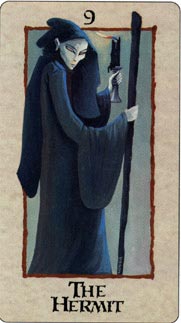 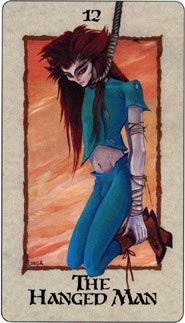 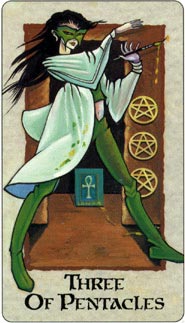 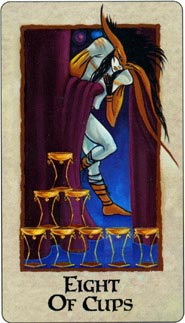 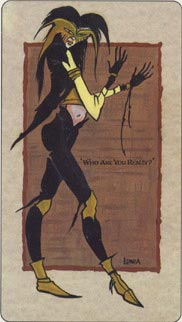 This was only the second or third deck I acquired, and I have had it for a long time now, but it is not one of my favorite decks to use for readings. The people portrayed in the art are elfin and very, very thin -- the style is pretty gothic, although initially I remember seeing it as sort of a heavy-metal-band aesthetic. This is a US Games-published deck and comes with a small booklet of divinatory and reversed meanings, which, unlike many of US Games' booklets, is written by the artist herself. There are 79 cards; the extra card features a performer type of character and the words "Who Are You Really?" It is meant to function as a sort of wild card, but can be removed from the deck.

Artistically, the deck is appealing in that the images and situations have an otherworldly quality, and I sometimes get a transported or elevated feeling through using these cards, as though the answers they give are unfettered, rising above what is mundane and concrete. The androgyny of the people in the images adds to this effect for me. Londa's portrayals of the tarot characters sometimes show a succinct and unique insight; I particularly resonate with the alien face of the Hermit and the Eight of Cups "stage fright". At other times, she seems to be going out of her way to put a new, edgy spin on the cards' traditional meanings, with results that do look "different"" but not with any real sensibility (for example, the upright Hanged Man).

I find this deck especially useful for queries involving money and other superficial issues, such as connections with coworkers and other people with whom we interact on a small-talk level. In my experience it is not helpful for gaining insight about deep relationships, important life issues, or your own internal reality. I do not recommend the deck for beginnining readers, as the art is mainly in a portraiture style, rather than displaying symbolic situations or activities. For collectors, this is a nice deck to own if you like gothic and/or dark fantasy art.

I love this deck! I have another, but I almost never use it.  The Londa Tarot has impressed many of my friends with its artwork, accuracy, and insight.  I connected with it the first time I used it, and it has been a source of comfort and reassurance ever since.

What first drew me to this deck was the artwork.  Londa's style is very unique and very striking.  The characters on the cards have an impish quality that draws you in and forces you to stare into their eyes.  They stare back at you, inquisitive and mischevious.  The experience leaves a definate impression on you, and their faces swirl in your unconscious as a haunting inspiration.  The imagery has inspired me to attempt a mural using several figures from the cards, but I could never claim to fully capture the beauty and stunning appearance of Londa's creatures.

Physically, the cards are sturdy, but sleek and smooth and easy to shuffle.  They have stood up to many readings over the years I've had them, and still seem like new.  The deck is a little large for my hands, but most decks would be, as I have quite small hands.  I have often wished that there was an actual book, instead of just a booklet, to accompany this deck, as the small print is hard to read at times.  What I do enjoy is that each of the Major Arcana cards includes a description of the card, but not just what is physically seen in the picture.  Reading the descriptions will often give additional insight into the meaning of the cards, and Londa puts her own poetic talent into every description.

I recommend this deck to anyone who wants a clear answer, expressed susinctly and honestly.  It is not harsh, hit-you-over-the-head honesty, but it makes its point obvious to even inexperienced readers, as I was at first.  Anyone looking for a deep spiritual and emotional connection with their Tarot NEEDS to at least give this deck a try... pick it up, play with it, put yourself into it as much as it puts itself into you.  You will love the feel and energy from the Londa Tarot.