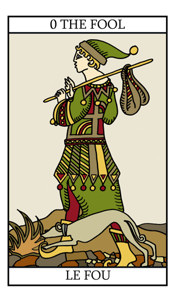 The Tarot Lovers' Tarot is a 78-card deck from Karyn Easton, previously only seen in her Tarot Lovers' Diaries. It's published with a "Little Black Book" of Tarot meanings, a somewhat misleading name for a comprehensive companion book of 208 pages. 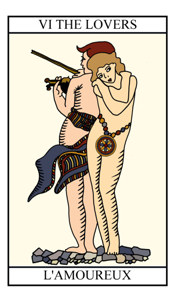 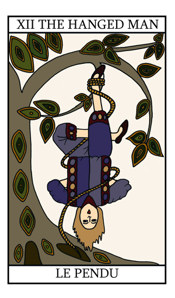 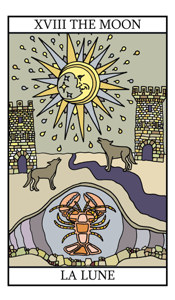 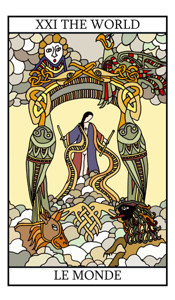 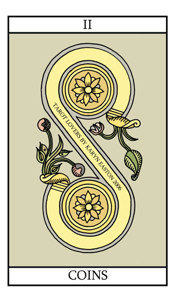 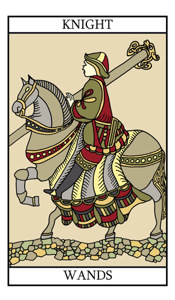 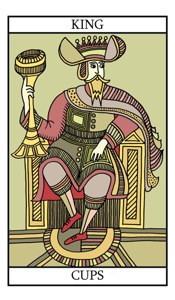 The “Tarot Lovers’ Tarot” is an amazing deck, without which I would never have been able to publish my first book, “Tarot, Birth Cards, and You”! I was beyond ecstatic when Karyn told me that Schiffer had agreed to publish her deck! So much work had gone into both the artistry and the interpretations, and into getting the deck up on her site, that publication was that last step that brought the process full circle. The deck now has its own site, but those who follow Karyn’s work will remember that she included a miniature version of the deck in her Tarot Lovers Diary (complete with backs, so that the cards could be cut out, laminated, and used as a deck). The backs were redone for the print deck.

This is a traditional 78 card deck, using traditional Major Arcana titles (with the following exceptions: Papess/High Priestess, Pope/Hierophant), placing Strength at VIII, and Justice at XI. The suit titles are Wands, Cups, Swords, and Coins (Pentacles), with the Court Card titles King, Queen, Knight, and Page. The cards are accompanied by a 208 page “Little Black Book”. I love the play on “Little White Book”, which is the usual terminology for the companion book to a Tarot deck! The cover is black with silver lettering. The box that the cards and companion book come in has the trademark Schiffer magnetic lid, with the cover matching the cover of the companion book. The back of the box shows the imagery of the Lovers’ card done in silver.

The Major Arcana cards are presented with the name of the card, the esoteric title, upright and reversed keywords, an explanation of each card’s energy in the upright and reversed (Ill Dignified) position, and a general statement for both the upright and revered positions as to what the energy is in the Seeker’s life. Card associations include card number, key number, rulership, Hebrew letter, translation, numerical value, astrological association, candle color, and crystal. The text is accompanied by a half-page black and white scan of the card.

Hidden meanings are listed for the Devil and the Moon:

The Devil: The Devil card in a spiritual position may indicate someone who is out of control and that something may need to be done about it. The Nine of Wands reversed, together with the Devil, may indicate that someone has a potential drinking problem.

The Minor Arcana Pips (numbered cards) are presented with the card name, esoteric title, associations for numerological value, element, tetragrammaton, life aspect, and astrological association, along with keywords for the upright and reversed positions, a short discussion of the card’s energy, and a general statement about the card in both the upright and reversed (Ill Dignified) positions.

The Court cards are presented with the title and suit, the esoteric name, the numerological value, element, elemental name, tetragrammaton, hair color, eye color, life aspect, and astrological association. Upright and reversed keywords are presented, along with a short discussion of the card’s energy in both positions. There is also a general statement for both positions.

Examples of the card statements include:

Fool (upright): Follow your head as well as your heart and make sure all’s in place before you depart.
Fool (reversed): Feeling blocked, nothing to say, stay true to your dreams and get back on your way.

Nine of Wands (upright): When you make your last stand be sure to know that help is at hand.
Nine of Wands (reversed): When you fear you are all alone, you’re quite right – you’re on your own.

The artwork is very simple, with the Pips done in the Marseilles style (icons only). Tradition has been followed in that the Four of Coins has the artist’s (engraver’s) trademark in the center (this has also been done with the Four of Cups). There are some lovely touches, such as the butterfly on the Papess, the astrological signs floating around the Wheel of Fortune, the rainbow colored stream of water on both Temperance and the Star, the Devil playing a violin, and the fish on either side of the figure in the World!

This is a very special deck, IMHO. The artwork, the tending to tradition, and the time spent on presenting the information on the cards shows a very professional and caring attitude. A welcome addition to any Tarot library! Viva “Little Black Book”!