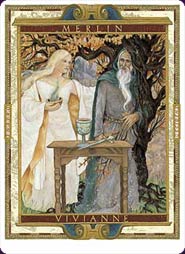 The Lover's Path Tarot is from Kris Waldherr, artist of the Goddess Tarot, and features love stories and legends from all over the world linked with the tarot archetypes. Its 78 cards can be used for individual readings, or love and relationship readings. 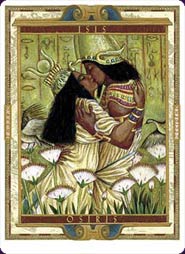 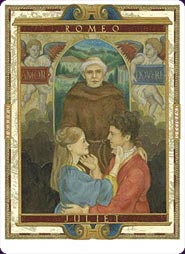 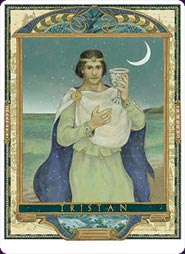 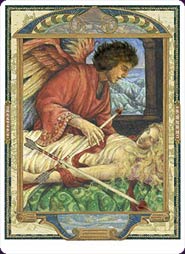 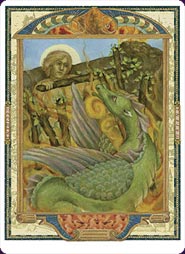 I’m a traveler, in several senses of the word, so I’m partial to the tarot as completely re-envisioned by different creative spirits. I’ve explored and returned many times to such worlds as Ed Buryn’s William Blake Tarot, Robert M. Place’s Alchemical Tarot, and the tarots of Emil Kanzalar and Hermann Haindl. The original Waite/Colman-Smith and Crowley/Harris decks also figure in there, of course—and so does The Lover’s Path Tarot, by Kris Waldherr. I’d been looking forward to trying out this combination deck-and-book for some time. When the US Games package arrived for review, it immediately moved to the top of its respective stack. Its presentation alone would have guaranteed it at least a jump or two out of order.

For one area in which The Lover’s Path Tarot surpasses all others I’ve seen is packaging. The cards, of course, are placed in their own cardboard container with a LWB (little white book), along with a larger book of 162 pages, and a basic layout scroll. Case, book, and card slipcover are all in near-burgundy with an embossed, winged and crowned heart providing an element of unity. The full-colored book includes brief discussions of each card, further resources, several layouts, and a card reference guide. I’m very impressed by Waldherr’s taste, detail, and sense of production values; and US Games has done her up proud. One example will suffice: the case’s recessed area designed to hold the deck is surrounded by a trompe l'oeil faux-wooden frame, and surmounted by decorative elements that include a lion with a paw on an open book (the words displayed are “La via dei gli amante”). Impressive? Oh, yes. I’ve seen tarot decks and sets that had their own personalities, ranging through chatty, informal, cluttered, braindead, streamlined, pretty, and academic, but this is the first I’ve seen that reminded me of an art museum’s books displaying its collection.

Some of this detail is also very sensible—such as the thick cardboard case holding the book, deck and scroll has a hinged flange with Velcro pads, so there’s no chance of tearing, bending, or buckling the package at any time. Those of us who keep a lot of stored tarot decks and swap among them will appreciate this.

If the presentation has an almost ornate, Italian Renaissance feeling to it, the artwork on the cards themselves is Pre-Raphaelite, with pastel colors, sharp lines, and a generally flat perspective. All of them are well-conceived and executed, if a bit lacking at times in detail. Some cards and some go far beyond that. The Prince of Arrows, Ace of Staves, Desire, Grace, Awakening: this is artwork of a high order. It is all suitable for pathworking or other, similar practices, if that suits your style, and meditation, tarot-reading, or just plain admiration, if you prefer those. For reading purposes, The Lover’s Path Tarot works effectively on romantic concerns. It could be interpreted for other matters using the “Meanings” section for each card as described in Waldherr’s book, but I don’t find most of the comments, which are non-romantic, reflect the card visuals. For example, the Two of Arrows shows Cupid bending over a sleeping Psyche with one of his arrows in hand, and another slipping down. The meanings read “Peaceful or temporary truce. Impasse. Understanding a difficult situation,” and still more, but I don’t get any of it from the beautiful image.

Each card measures 3 1/2” by 4 3/4”, or slightly longer and wider than the tarot standard. I found them easy to shuffle with my average-sized hands; but those with smaller hands may have some difficulty. Card edges are rounded, and good cardboard stock was employed. You’ll find no stubs or indentations on this lot. A slender white border surrounds a fancy black-and-gold one, which in turn surrounds the card image. Though superfluous, it’s perfectly in keeping with the sense of ornate richness that’s very much a part of this tarot set.

The deck conforms to standard tarot expectations in outward form: 78 cards, 22 majors, and four suits with four courts, a piece. But there are no Kabalistic or astrological references. The Lover’s Path Tarot isn’t Waite, or Crowley, or Marseilles, though in the major arcana Waldherr refers back to the Waite cards. This is her ordering and card titles:


Each of these cards is related to a different story involving love. Triumph is Ariadne and Dionysus, Desire is Tristan and Isolde, etc. The four suits, too, are tied to stories involving love.

But does this make the tarot truly one of a Lover’s Path? What fits into the well of emotions that stores Love? Sufis speak and write of an all-consuming love so intent on their God, that nothing else exists. Then there’s CS Lewis, whom I view with equal parts admiration and exasperation. In his little book The Four Loves, Lewis writes of Need-Love, the love of a young child for its parent, and Gift-Love, which sounds like compassion; including the compassion felt by all the buddhas and boddhisatvas for all manifest creation. There’s also a friendship form of love, which doesn’t involve erotic consummation, and which Kipling expressed well with a side order of Victorian in his poem, The Thousandth Man:

His wrong’s your wrong, and his right’s your right,
In season or out of season.
Stand up and back it in all men’s sight—
With that for your only reason.
Nine hundred and ninety-nine can’t bide
The shame or mocking or laughter,
But the Thousandth Man will stand by your side
To the gallows-foot—and after!

I’m not offering a criticism in stating this. Romance is as much a type of love as any other kind, and it’s well worth celebrating with an entire tarot deck. After all, which of us hasn’t taken on the role of that ultimate Fool, the lover, and gladly? And which of us doesn’t secretly pity those who have left such Foolishness in their wake, and lived too long under the auspices of the Four of Pentacles? But romance to one side, it’s still useful to know in advance what this tarot is truly about, before you spend your money based on the set’s title, expecting a deck with a rather broader field of interest.

Where I would offer a criticism, and a major one, is in the subjects Waldherr selects to implement her vision of a new major arcana. Several card choices are excellent. Grace, replacing the Star, is all about the poet Dante and his ideal, imagined love, presented in the context of his Divine Comedy, Beatrice: a perfect choice to represent the individual and the higher self. Temptation, replacing the Devil, shows us and Francesca da Rimini and Paolo—also from the Divine Comedy, though based on fact: the 13th century tale of a noblewoman who has an affair with her husband’s younger brother, before both were caught and killed. Again, the choice of subject is perfectly suited to the card.

However, elsewhere I find puzzling some of the stories and personalities Waldherr attaches to her major arcana. How do Cleopatra and Caesar exemplify Fertility? Even after reading the brief fairytale made out of this, I’m still uncertain. Is the title for the card displaying Dido, Oppression, really appropriate, considering that she was never oppressed in any sense of the word, but abandoned? Those are two very different things. The tale of Tannhauser doesn’t real fit the Judgment card, but would have made a perfect choice for a Marseilles-style Lovers (with the Teutonic bard having to choose between lust and love, the goddess Venus and the human Elisabeth).

Then, there’s the figure on Justice’s card: it’s Penelope, wife of Odysseus (Ulysses) in The Odyssey. You’ll recall that Odysseus stayed ten years fighting at Troy, after which the vengeance of a couple of wrathful gods keep him another ten on the road home. Penelope meanwhile was assailed by a host of powerful suitors, and forestalled them through the clever ruse of weaving a tapestry—with the promise that on the day it was completed, she would choose one suitor for her husband. Every night, she unraveled her daily work, until finally caught. Then she came up with the idea of requiring the suitors to string Odysseus’ bow, with herself as prize to the winner. None could; only a shepherd, really her husband in disguise, manages it with ease, then goes in for the requisite bloodbath that the Ancient Greeks always loved hearing from their bards. Waldherr refers to “the immovable forces of justice” in this tale, but to my confused mind neither the original Odyssey nor the brief retelling of it in the accompanying book provided any sense of this. Certainly Penelope herself couldn’t represent Justice (or wisdom and fairness, two out of three of the keywords Waldherr attaches to this card). Shrewdness or slyness, yes. Like her husband, Penelope triumphs by using her brains to cheat the expectations of others.

I’m a lot less bewildered and more positive about the minor arcana. All attempts to find a single theme for each card are abandoned. Instead, we’re given four tales told through a series of ten cards, each, just as Brian Williams did in his excellent Renaissance Tarot. Waldherr cleverly assigns the first card in each suit (arrows, coins, staves, cups) to set the thematic stage, and the four court cards become profiles of major figures in the tales. The stories are well-chosen: Tristan and Isolde for cups, Cupid and Psyche for arrows, Danae and Zeus for Coins, Siegfried and Brunnhilde for staves. Each tale is told clearly, if prosaically, as though in a young child’s storybook. Waldherr obviously wants to get the basics out, and leave you to research and meditate on what she’s provided. Even here, though, I find a baffling inconsistency. The tale of the arrows, Cupid and Psyche, has Adonis as the King of Arrows, but Adonis occurs nowhere in the tale. His description as “a brilliant force of intellect” also seems strained, since there’s no evidence from Greco-Roman tales until now that he had any brains, at all. He’s come down to us as a byword for beefcake, male physical beauty. It feels to me as though Adonis was crowbarred into the nobility of this deck, for want of another major figure in the tale.

So the positives to The Lover’s Path Tarot, as I see it, are the artwork, sumptuous presentation, minor arcana, multiple layout examples, and original theme. The tales associated with the major arcana often didn’t match up with the card titles, and Waldherr’s efforts to expand all her cards’ meanings to embrace more than romance don’t reflect the visuals. Finally, the book’s very simplified tales didn’t work for me. I prefer the lengthier, meatier originals and their variants; your mileage may vary. Art lovers will want this deck, and romantics of all ages, places and time periods; as will tarot users hunting for new, totally different decks. But I admit to preferring Arlenea/Cori’s wonderfully evocative Tarot of Transformation, when it comes to exploring the world of emotions and relationships. They cast their net wider, and look deeper into the inner sea.