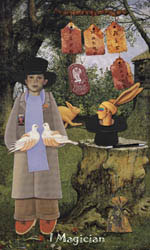 The Lucky Pack Tarot was born from the Tarot Art Calendar by Arnell Ando and Leslie Cochran. Arnell's 22-card collage deck is signed, handmade, and a limited edition of only 250 copies. 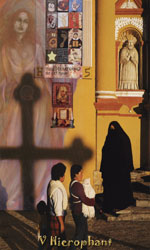 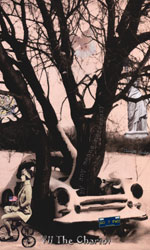 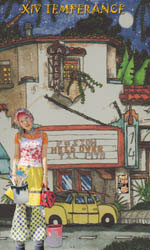 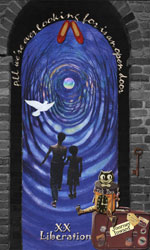 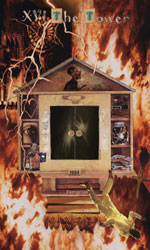 For the past three years, artists Arnell Ando and Leslie Cochran have used their wonderful collage art skills to bring us Tarot Art Calendars. This is the fourth, and final, year for this project. Arnell and Leslie have taken the cards that they produced for these calendars and created two unique and stunning 23 card Major Arcana decks (the extra card for Arnell is The Lovers, for Leslie it is The Fool).

Both decks (Arnell's Lucky Pack Tarot, and Leslie's Dreamythology Tarot) are limited Special Edition decks (only 250 signed, numbered decks were created). The package includes 23 laminated Major Arcana cards (note: the lamination on these cards is 5 millimeter), specially designed color backs, a bonus card (The Lovers for the Lucky Pack Tarot), a handmade instruction booklet printed on parchment paper with a full color cover, a Celtic Cross Spread card with instructions, and a numbered, signed certificate of authenticity, printed on parchment (very elegant!). The colors come through so clearly because these are not photo copies, they are printed on the artists home computer on the best available quality Epson paper. As a bonus for pre-ordering, a full set of Major Arcana self-adhesive stamps was included. I love these stamps - I could never bear to actually use them on anything!

The hand made instruction booklet that comes with this deck carries a statement all on its own - done in parchment paper, with a full color cover and bound with gold cord, it comes in its own parchment envelope. Very, very elegant! Each card includes a description of the card and the card meaning in both the upright and reversed positions. From the book:

Description: The Hermit retreats cyclically to an underworld peace and reflection, whether that be the bear withdrawing to cozy hibernation, the snake going underground come winter or the native who returns to natural surroundings to reconnect to folk tales of great warriors and proud ancestry. A withdrawal from our chaotic outer existence to find solace and renewal can be a healing ritual, a means of regeneration and a way of welcoming the emerging self.

Meaning: A time for soul searching or an inner vision quest. A withdrawal from the busy outer world in order to find peace, revaluate beliefs and rejuvenate the spirit. It is a chance to connect with the creative self or keep a journal. You are independent, deeply introspective and well on the path to individuation.

Reversed: Could warn of excessive isolation, inactivity, antisocial tendencies or even depression. It could stand for loneliness, feeling stagnate, or an inability to ask for help from others.

The cards themselves are approximately 3 inches by 5 inches, and laminated to a thickness of 5 millimeters (which works well for a Majors only deck, but would not work well for a 78 card deck). The "signature" card for the deck is my very favorite card - that of the World. Here we see a woman, dressed in flowing white robes, seated at the base of a mature tree. Her arms cradle the globe of the world that sits in her lap. A male figure lies across the top of the globe, his arms "holding on". The backs of the cards have a white background, with a pattern of female figures, done in purple and reaching out to hold hands with the figures in the next line. It would not be possible to tell if a card was drawn in the upright or the reversed position.

The illustration for each card goes full to the edge of the card - there is no border. (I really like decks with no borders - it is much easier for me to enter the card.) Each card carries its own message, in its own way. The Fool is depicted as a gunfighter, seen in the light of the moon. The Magician is a small boy, practicing his magic. The High Priestess took some getting used to for me - she follows her path dressed in black on a motorcycle! The Empress is layer upon layer - a stunning card showing a warrior in metal armor in the background, with the figure of a woman in oriental dress and hair style reflected in the mirror of a vanity in front of him. Above the mirror we see the face of a woman (the artist herself). When I first saw this, I was awestruck to the point that it was scary. The Emperor shows a figure seated in a chair, with the head of what appears to be a bull. In the background we see an Eagle flying on the right hand side, and a frightening figure superimposed over the US flag on the left hand side.

The Chariot shows the relic of an abandoned car, with the body of an old growth tree coming out of it. The Hermit shows a Native American shaman seated before his fire on the right hand side, with a lamp above him and a spiral below him. On the left hand side of the card we see a dark bear hibernating before a fire. This card is special to me, as the Hermit is one of my birth cards. Another card featuring the artist is the Wheel of Fortune, with a female figure sitting before a wheel that carries the labels of "Faith, Luck, Win, Lose, Chance, Choices, Wish, and Karma".

Death is an incredible card, very dark, with a lake at the top, followed by a body floating in the air, holding a mask of her face, under which we see an old fashioned typewriter with a typed message. The Tower depicts a house, reflecting the different parts of the psyche. Judgment is renamed "Liberation", and shows a couple walking into a tunnel with a light at the end, accompanied by a white bird.

For those that have been collecting the calendars, this deck is a "must have". I see it as more than a collectors item - I see it as a usable deck that will stretch the imagination of the reader and the Seeker. It is a specific type of gateway through the unconscious that uses art as a graceful entrance. While everyone may not relate to all of the cards, I do feel that this deck has its place in readings and ceremonial/ritual work. Done from a female perspective, it is also a good deck for use in women's groups.