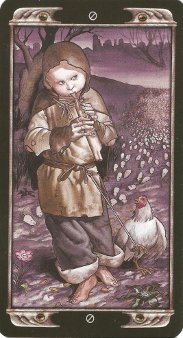 The Ludy Lescot Tarot is a mysterious deck from the perspective of Ludy Lescot, "a young esoteric and student of the arts, whom one could meet on the steamy streets in the New Orleans French Quarter". It's an expressive 78-card deck that's a bit different. 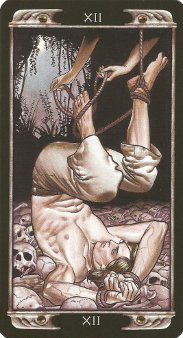 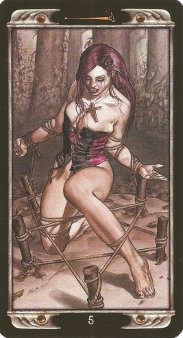 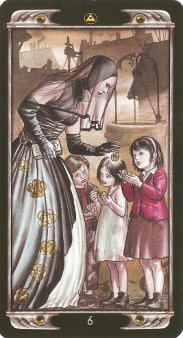 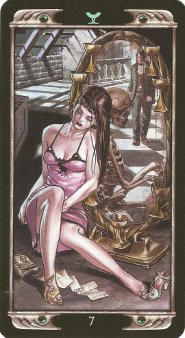 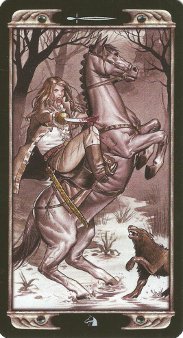 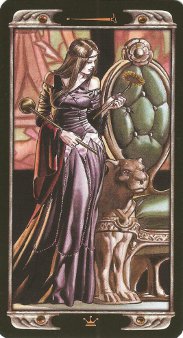 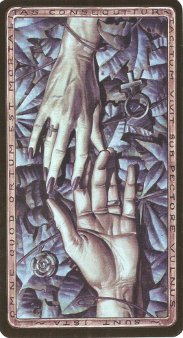 It is impossible to categorise this deck. As with so much of Lo Scarabeo’s work, this deck’s unique, maverick style renders such an attempt futile.

Firstly, the box. Pagans will love it. Black with a purple ankh on it – matriarchs may wish to interpret this as the sign for Venus. The majority of the cards’ protagonists are women. Consideration of the reasons that particular roles have been given to a particular sex within the deck inevitably leads one to conclude that this is a Pagan deck, despite the large number of crucifixes within the imagery. (For example, the woman on the 2 of chalices wears a caduceus).

None of the major arcana have titles – they simply bear a number from 0 to 21. The minors simply show the suit symbol (top of card) with a number from 1 to 10 at the bottom. The court cards are distinguished by different symbols, for King, Queen, Knight and Knave.

This is a fabulous idea, and one that Lo Scarabeo seem to be using more often. Many of their decks bear images that are cluttered with titles in up to six languages (their latest example of this being the ‘Tarot of Fire’). The format here is clear, simple and universal – and gives greater card-space for the image itself – the most important thing. Bravo!!

Lo Scarabeo’s imagination is in the ascendant here. Ludy Lescot is a fictitious character who is given life in the manifestation of this deck. She is, according to the LWB, ‘a young Tarot reader . . . who can be found in the area of the famous Bourbon Street to the French Quarter of New Orleans . . . she has written various publications on esotericism, but rarely under her own name’. The text goes on to say that ‘Ludy experienced unwanted popularity’ when famous people she did readings for revealed to the press her uncanny ability to foretell the future, including ‘disturbing predictions concerning the decade that has just begun’.

Following in the footsteps of Lo Scarabeo’s 2012 – tarot of Ascension tarot, Ludy Lescot offers a gallery of images that illustrate the changes that may come . . .

The artwork rang bells in my mind . . . where had I seen this artist’s work before? Suddenly the penny dropped. The deck is by the same guy who painted Lo Scarabeo’s ‘Initiatory Tarot of the Golden Dawn’. However, this is definitely the dark, malevolent and sinister sister of the aforementioned.

Each card is full of symbols. However, the LWB doesn’t refer to the images at all. Instead, each card is given a short, cautionary tale . . . we are left (intentionally) very much to our own imagination. Many of the tales are quite brilliant. Here are a few examples.

The (somewhat despotic-looking) Pope . . . ‘Always seek a teacher. Leave him with due respect when you are ready to move on. Be grateful for what he left you even when you understand you will never be able to be like him.’

The Lovers: (a bound woman being bitten by a male vampire, while a man on horseback gallops to her rescue) . . . ‘Passion is born of blood. Kindness is born of the soul. Love is cruel and, if it is authentic, you will not be able to escape it.’

The Wheel: (a woman cries at the bottom of a tall stairway, on the steps are human bones. A human figure at the top of the stairs seems to be greeting the light within a big wheel) . . . ‘When we are in the dark, we are attracted to the light like a moth to the flame. In the light, it is the darkness that beckons to us.’

The Hanged Man: (a man lies upside down on a bed of skulls, a pair of hands is either undoing the ropes that tie his feet or fastening the knots) . . . ‘Memory is like a cemetery of illusions. No matter where you turn your head, look upward and forward!’

Death: (a woman holding a crucifix leans against a tombstone) . . . ‘You cannot choose when the body dies, but you can choose when your soul dies. And the answer is never! When you seek eternity in things of little value, you kill your soul.’

The Devil: (a provocative and unique image. ‘Madam Whiplash’, wearing an upright pentacle, pulls a naked man and woman toward her by their hair. All three figures kneel on a bed of skulls. Flames dance behind them . . . ‘Do not lose your virginity on a bed of bones. If deceptions and subterfuge baptise love, they will enslave you forever.’

The Tower: (another unusual and startlingly original image. A woman willingly flings herself from the tower she has made) . . . ‘Close your eyes and make a leap of faith. Reopen your eyes and you will have been reborn.’

The Moon: (a woman shrouded in mist approaches the traditional twin towers, the moon between them bears a face) . . . ‘Never stop believing in ghosts. Under the light of the moon, give them a face and let them go. Only in this way will they let go of you.’

The World: (a naked couple sit with their heads on each others’ shoulders within a sphere. Stars shine around them, a rose beneath them . . . ‘Man will never be complete unless he knows how to welcome his own soulmate within the depths of his own heart’.

Four of Chalices: ‘An empty chalice can be filled. A full one can only be emptied’.

Eight of Pentacles: ‘Do what others fail to do and never let idleness impoverish your soul.’

Four of Wands: ‘Desire is fuelled by the unknown, not what is in plain view.’

King of Swords: ‘Even the smallest man has the right to justice, but beware: the justice of a king with no throne is often revenge.’

Here are two little things I noticed. Interesting, considering the timing of the deck’s publication . . .

Five of Pentacles – the Masonic pyramid with the all-seeing eye appears on the stained glass church window behind the homeless couple. This appears to be a reference to the Illuminati’s attempts to impose a New World Order, and a veri-chipped human race.

Six of Pentacles – a woman is the benefactor here (traditionally this card shows a male assuming this role). This further illustrates the deck’s matriarchal quality, suggesting the possibility of salvation by accepting the Goddess / Sacred Feminine / Old Religion.

To end, I have two quibbles, both related. A lot of thought has gone into this deck, but nothing is perfect. It is a shame that, for a deck which is clearly Matriarchal, there is the (generally) unacceptable template of three males to only one female within the court cards of each suit. This imbalance was corrected by Aleister Crowley in the Thoth tarot over sixty years ago, by having a King, Queen, Prince and Princess.

Further to this, for a deck with so much female energy, it is a shame that many of the women here have been sexually objectified. Tight-fitting corsets resulting in prominent boob display abound. Does a deck of this class need titillation to sell it?

Nevertheless, these are minor faults, given the bigger picture presented here. This is an ‘important’ deck, suitable for visionary readers as well as collectors.

This deck is so eye-catching. It is made up of brilliant images that stand out and remain in the mind's eye.It is an example of the modern decks that feature strongly on characterisation. In this deck we meet a group of quite individual characters.

Ludy Lescot who lived and read cards as a young woman on the streets of New Orleans, learned to read from her grandmother and sketched this deck which the publisher Lo Scarabeo took up and produced. The artist Patrizio Evangelisti, who has also done the art work on the deck, Initiatory Tarot of the Golden Dawn, created these memorable images. Ludy's motives for this deck was to help people find their way in the dark. Whether this story is true or not the deck is stunning and yes it is dark. It is considered to be a gothic deck.

The minor arcana are moody and draws you into the circumstances of each depiction. I could see by working with these cards one could become totally absorbed in them. Every ace is masked, joy is dampened down by clowns features and each of the solo characters are full of life history. I love this minor arcana, it would really be a great companion.

The court cards are aloof; flawed but reverent characters. I feel a distance to them, though there is plenty of depth to delve. I think they would hold concepts that aren't necessarily palatable.

If I were looking for a weak spot in this Tarot, I would say it is the Major Arcana, not that it isn't good. It does have some absolutely stunning characters, such as the Fool, a memorable Hanged One and an interesting Hermit. There is an ultra modern approach to the Majors however, I feel some of them just lack the power that the major arcana usually hold.

I absolutely love this deck. I think it is so salient, has such a dominating presence and challenges its readers to take a walk on the darker side. For me it’s a must.