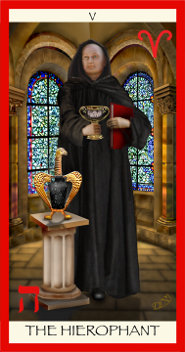 The Magdalene Legacy Tarot is a 78-card deck celebrating the lost Goddess of Christianity: Miriamne e Magdala - beloved wife, leader of a spiritual movement, mother of a dynasty and inspiration for timeless legend. It is based on theories of Tarot’s heretical gnostic and mystical beginnings in medieval Mediterranean Europe. 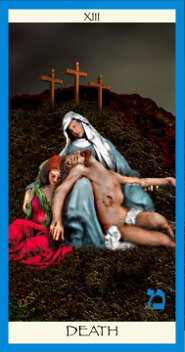 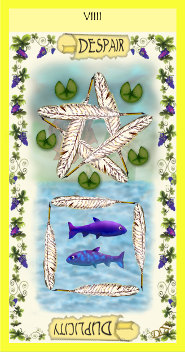 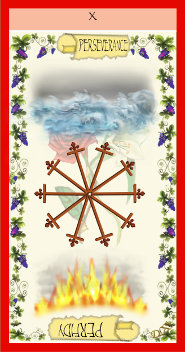 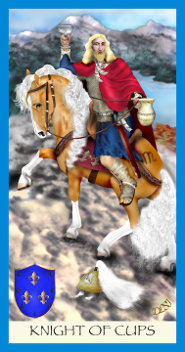 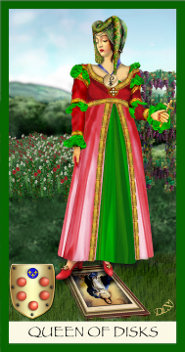 "The Magdalene Legacy Tarot - Lost Keys of the Madonna" is a limited first edition run of 500 signed and numbered copies. I was impressed by the presentation of the certificate ... it comes in a bright red envelope, which so reminded me of the envelopes that my Asian friends use to gift money in. Very classy! The box and the companion book show a clean white background, with an entwined red rose and white lily. This speaks tons as to what this deck is all about, and what you will find in the companion book!

This is a 78 card deck, following traditional titles for the Major Arcana. The suits are Cups, Disks(Pentacles), Staffs (Wands), and Quills (Swords). The Court Cards are King, Queen, Knight, and Knave.

Unique to this deck, the Court cards represent specific royal Grail families. Each of three Court suits represents one of the three pivotal figures of the epic, with the fourth suit representing the medium uniting all three figures. Each court card contains that figure’s religious correspondence and their “Magdalene” icon, including a skull, a cross/crucifix, an alabaster jar, and an open book. Cups represent The Holy Grail, Mary Magdalene; Disks represent Jesus; Staffs represent John the Baptist; Quills represent the Gnostic scripture and secret gospels that unite the other three.

I have always been impressed with Margaret Starbird's work (including "Woman With the Alabaster Jar: Mary Magdalene and the Holy Grail"), which is part of the foundation for this deck. Which also means that I am a bit in awe of these cards! I love the comments that Christine Payne-Towler made about the use of the Picard minors, which puts this deck in with the family of Spanish Tarots.

DuHamel draws from the esoteric and hermetic traditions of Judeo/Christina mysticism, and uses the correspondences of a continental hermetic system. Most importantly, this deck celebrates a resotration of the Sacred Feminine. This is illustrated through the use of the Grail mysteries of Mariamne e Magdala ... Mary Magdalene.

Fair warning ... the print in the companion book is uber small! Having said that, I can read it with my glasses ... no need for a magnifying glass. DuHamel discusses the background of the deck, the journey that brought her this far, the Gnostic Gospels, and much, much more.

Each Major Arcana card is presented with the associated Archangel, astrological sign, element, key words, Cabalistic path, and Hebrew letter. Each Court card is presented with the element, Tetragrammaton, card personage, and nature. Each Pip (numbered card) is presented with associations for Cabalistic world, Sephira, Key words, colors, gemstones, astrological association, Numerology, Ethereal Essence, and Mundane Essence. All cards have a small black and white scan. The Major Arcana and the Court cards have a quote, while each number in the Pips has a quote.

The small things are what attracts me, what help me in learning a new deck. DuHamel has included such niceties as charts giving the associations for the Continental, Victorian, MLT, and Modern Poker decks (including the element); the element, direction, inherent attribute, ethereal attribute, humor, quality, and season; the attributes in the Four Worlds of the Tree of Life (Worlds, Tetragamaton, Elements, Senses, Astrology, Human Qualities, Tarot Suits, and Sacred Geometry.

There is an epilogue at the end of the book, as well as illustrator's notes, and an extensive bibliography, with recommended reading. Sample spreads include the Templar Cross, the Cross of Lorraine, and the Thirteenth Apostle. The cards are of rather stiff card stock. The backs show a 1/4 border, with a circle of red roses and white lilies in the center, surrounding an internal graphic, and are reversible. The card faces show a color coded border: Cups - blue, Disks - green, Staffs - red, and Quills - yellow.

The Major Arcana show the card number in Roman numerals across the top, with the card title across the bottom. Each card shows the astrological attribution and the Hebrew letter. The Court cards show the title and suit across the bottom of the card, with the heraldic icon in the lower left hand corner. The Pips show the card number across the top, in Roman numerals. An upright keyword is at the top of the card, with a reversed keyword at the bottom of the card (literally reversed, so that if the card was drawn reversed the keyword could be read). The imagery on the High Priestess is very traditional - a female figure, seated, with a scroll in her right hand. She is seated between two pillars (one white, one black), wearing a white gown with a blue robe, her right foot resting on a crescent moon. The Queen of Quills (Diana, Princess of Wales) is dressed in a black dress, and is holding a red cube with three white dots running diagonally. A gold scale stands in front of her, with a red rose in front of it. In the left hand corner we see her heraldic emblem.

The Seven of Quills shows a triangle in the upper half of the card, under the keyword "control", with a square in the bottom half of the triangle, under the keyword "chaos". The Eight of Quills shows a spoke, made of eight Quills. The upright keyword is "action", the reversed keyword is "aversion". The Knave of Disks (Giulianno de Medici) shows a dark haired youth, kneeling in a field of lilies and roses. He wears a red shirt and pants, with a green tunic. He is holding a cross in his left hand. His heraldic icon is in the left hand corner. The King of Staffs (William Sinclair, Baron of Roslin), shows a youthful king standing, wearing a white shirt, a plaid kilt. I his left hand is his staff of office. He stands between two pillars, over his astrological sign (Leo), with a skull and crossbones at his feet, In the lower left hand corner of the card is his heraldic icon.

The Ten of Cups is one of my favorite cards, showing ten cups moving in an arc from the upper left hand side of the card to the lower right hand side. They follow the colors of the chakra system - red, orange, yellow, green, blue, lavender, and white. The upright keyword is "harmony", the reversed keyword is hostility.

I am enchanted with the colors and the imagery of this deck, as well as the focus on Mary Magdalene, the Sacred Feminine, and the Grail myth. This is an exciting deck to work with! There are many nuances throughout this deck. One of these nuances is that of the World.. Traditionally numbered XXI, the World card is numbered XXII in this deck. Why? According to DuHamel, one reason is that the Magdalene's feast day is July 22nd! Another reason is that the total amount of stairs to reach the top of the Magdalene Tower at Rennes-le-Chateau is 22! Lots to think about here!