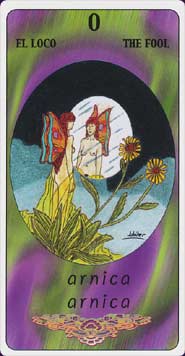 A nature-based deck in English and Spanish that focuses on the herbs and magical plants. The minors of the Tarot of Magic Herbs are different - no suits or numbers, just herbs arranged in alphabetical order.


Card Images from the Tarot of Magic Herbs 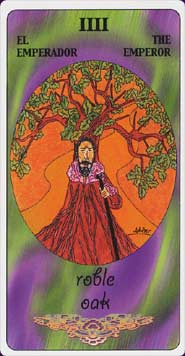 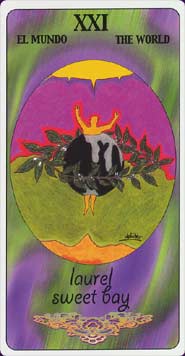 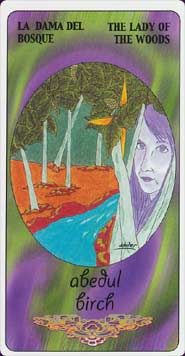 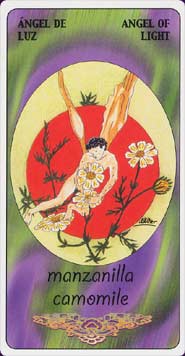 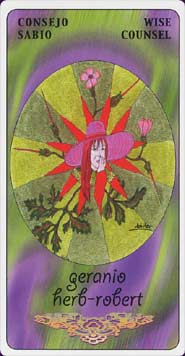 Gabriel Vasquez, author of several books on herbs and natural medicine, had the inspiration for this tarot deck. Vasquez runs workshops, courses and lectures, and has written several books over his 27 year period of herb study, including 'Magic of Herbs', 'Medicinal Plants in the Basque Country', 'Remedies of Natural Medicine' and others. He now focuses on magical and spiritual aspects of plants and floral therapy, and his love of flowers lead to the creation of this deck with collaborating artist, Jabier Herreros Lamas.

The Tarot of Magic Herbs differs from other herb-inspired tarots like the Tarot of Hellen and the Herbal Tarot by showing the herb incorporated into an inset scene, rather than stand-alone or simply worked into the Rider-Waite imagery. The oval-shaped card scene is located in the centre of the card, with the herb name in Spanish and English below, and the tarot title on top. All this is paced on a green and purple swirling background, which is a little distracting.

Each of the seventy-eight cards is, naturally, associated with a specific European herb. The Fool is linked with Arnica, The Magician with Mistletoe, the Empress is of course the Rose, and Death is Cypress. Interestingly, the Tower is represented by Mint. (I am not sure how some of the herbs are associated with the tarot archetypes, and the little white booklet provided doesn't enlighten the reader.) Each major card has a 'message' and divinatory meanings for 'front' and 'back', or upright and reversed.

These cards do move away quite some distance from a standard tarot. The minor arcana have varying titles and images and are not suit cards at all, but fifty-six cards arranged alphabetically by the herb's title in Spanish. Each minor does have a title that is relevant to the scene on the card, eg Abedul / Birch is The Lady of the Woods, Eucalipto / Eucalyptus is the Angel of Purification. The companion book is trilingual - English, Spanish and German. (The format of the booklet is curious; it has been stapled and folded with two columns of text to a page.)

Overall, the Tarot of Magic Herbs is an average tarot deck that is likely to appeal less to the casual reader than to herb enthusiasts and those with an existing interest in magical plants.