Tarot of the Magical Forest 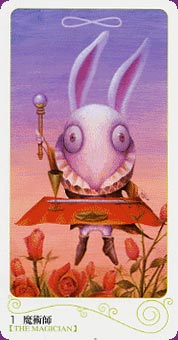 The Tarot of the Magical Forest is a bizarre journey through a world of strange-but-cute animals and characters in eye-catching Rider-Waite based illustrations. First published in Taiwan by Taiwanese artist Leo Tang, it's also been re-published by Lo Scarabeo with their standard borders.


Card Images from the Tarot of the Magical Forest 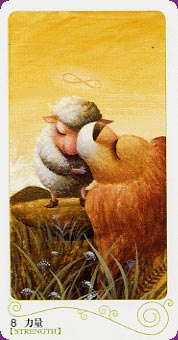 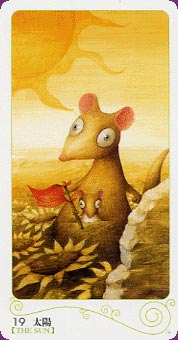 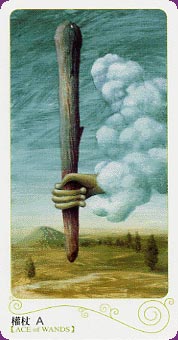 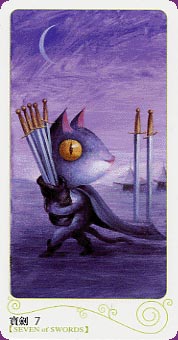 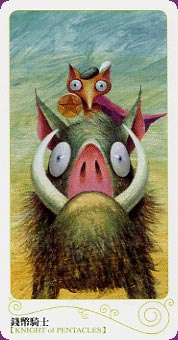 Tarot of the Magical Forest Sample Images Courtesy of the Tarot Garden.

Tarot of the Magical Forest Review by Angela Asherbranner

On first inspection, this deck is definitely a Rider-Waite-Smith (RWS) clone that cleverly replaces the human element with stylized animal creatures. The deck is a standard compliment of 78 cards with 22 Majors and 56 illustrated Minors. The cards measure 2.5” x 4.75” which makes them a little narrower than standard size and easy for small hands to shuffle. The card stock and coating appear standard and sturdy enough to withstand shuffling without being stiff or overly slick.

The illustrations are surrounded by an unobtrusive plain white border with light gold filigree on the bottom. Under the filigree, each card is numbered and titled in both English and Chinese, following the convention of the RWS (8 is Strength, 11 is Justice). The Minors suits are labeled as Wands, Cups, Swords and Pentacles, and feature a dominant animal group within each suit – frogs wave Wands, rabbits raise Cups, cats wield Swords, and foxes play with Pentacles. The card backing design is suitable for reversals. A dark blue background shows a mirror image of the deck title (in English) with a simple drawing of trees with a new moon, both in white.

The deck arrives shrink-wrapped in a colorful presentation box with an inset section for the cards and a self-closing attached lid. The accompanying soft cover book is written in traditional Chinese with large black and white pictures of the Majors and small pictures of the Minors. A variety of sample spreads are illustrated, but unfortunately, the book does not come with any other translations. This is not detrimental, however, as anyone familiar with the RWS decks, symbols and interpretations, or access to the many publications, will be able to immediately read with this deck. Although the pattern of the deck is RWS, there are just enough subtle variations and color cues to use this deck for intuitive readings.

The artwork is skillfully executed with subtle textures and rich, harmonious colors. The hazy atmospheres and tight perspective behind the plain white borders enhance the images’ depth and gives the impression of looking through a window into another world. “Magical Forest” is a perfect description of this world, as closer inspection reveals it is not so much an RWS clone as a small glimpse into a strange and bizarre “alternate universe”.

The Trumps appear to follow a color pattern – purples and blacks for the darker cards (Devil, Tower, Death), yellows and gold for the lighter cards (Sun, Strength) and browns and reds for the more philosophical images (Priestess, Emperor, Justice). These patterns are also repeated in combinations; for example, the Judgment card features the upper half of the card with a trumpeting lamb in the positive colors of gold and yellow, while the lower half of the card depicts the dead rising in darker tones of blue and purple. The color schemes are loosely carried over into the Minors to reflect a general sense of the cards’ meanings.

The animals themselves are what make this deck unique. Superficially, the characters have the disproportionately large heads and wide-eyed look that leans uncomfortably close to “cute”. Yet be aware that all is not frivolous joy in the Magical Forest. Compare the happy frogs celebrating in the Four of Wands with the almost manic look of the fox clutching his disks in the Four of Pentacles. There is also very little that could be described as cute with the pierced cat in the Ten of Swords or the anguish of the poverty-stricken foxes in the Five of Pentacles. The Magical Forest has a dark side, and it is the expressiveness of the characters that balances a cursory impression that this set is not a serious reading deck or simply a collector’s deck.

The full impact of the Magical Forest comes to life either in a single card reading or large, complex spreads. By color alone, one can determine a general impression of the reading before examining the individual imagery. The window metaphor is particularly striking when comparing card positions in patterned spreads, as the illusion of depth appears to open a mystical portal connecting the cards into one single, cohesive landscape. In addition, the fantasy style of the artwork lends itself beautifully to creating a story or narrative built from individual card interpretations.

Overall, I have found The Tarot of the Magical Forest a fascinating deck that is strong enough to stand apart from its classification as a RWS clone. It follows the RWS pattern closely enough to be accessible by beginners, and for the more experienced reader it has the potential to be appreciated on many levels – as a reading deck, a study deck, or a collector deck of unusual and beautiful artwork. Beyond a simple collection of cards, this deck has much to offer those brave enough to step through the window and wander within the depths of the Magical Forest.


Complete Details of Tarot of the Magical Forest


Similar Decks to Tarot of the Magical Forest