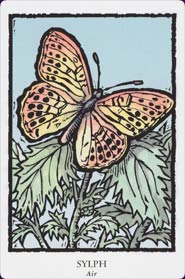 The Magical Menagerie has 42 cards featuring real and mythical animals from Greek and Celtic legend. A deck for self-exploration, problem-solving, magic and divination.


Card Images from the Magical Menagerie 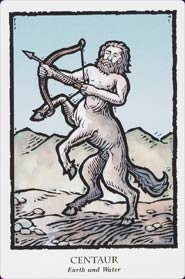 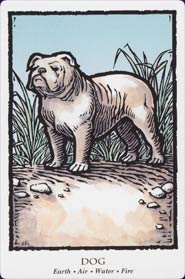 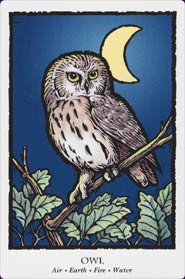 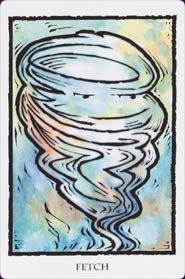 The Magical Menagerie is indeed a very magical book. Based on ancient Greek elemental classifications/correspondences and Celtic mythology, these cards present a gateway to a completely "other", and very magical, world. Leslie has done this by including animal imagery from this world (such as the bear), as well as the "otherworld" (such as the elemental Gnome) - imagery that has mythological magical connotations.

In his preface, Leslie states that each beast included in this book epitomizes a specific spiritual quality, a quality that may be operating in the Seekers life at the time of the reading. In many ways, this book is an extension of Leslie's previous book, The Magical Personality). In The Magical Personality, Leslie works with the description of magic as being largely a psychological event. Here he describes personality in terms of the five elements: Fire, Water, Air, Earth, and Quintessence (Spirit). Two of the four physical elements (Fire, Water, Air and Earth) are seen as well developed and conscious, two are seen as undeveloped and unconscious.

In The Magical Personality, the conscious pairs are described by mythological beasts that illustrate the positive qualities of a given type. The unconscious pairs are described by these same beasts, using the negative, or shadow qualities of a given type. Leslie has placed the focus of this work on a readership of magicians and wizards. His thought was to place at the wizards disposal a means of discerning Otherworld influences. In this way, depending on the timeline of where these influences are from, time and place can then be determined in a reading.

This 42 card deck includes elemental representations (Earth/Gnomes, Water/Undines, Fire/Salamanders, Air/Sylphs, Spirit/Quintessence), and a Fetch, or artificial elemental. There are twelve mythical beasts, and twenty-four animal spirits derived from the Celtic tradition. Leslie uses the following attribution system for the elementals:


In addition to the system above, Leslie presents a section on how the elements interact with each other - whether they weaken each other, support/enhance each other, or may be basically viewed as having a neutral relationship. This system (which in the field of Tarot is termed Elemental Dignities), adds a great deal of depth to any reading.

The cards themselves are approximately 3" by 4 /12", in high quality, glossy cardstock. The backs have a 1/4" white border, surrounding a thinner black border. The middle section of the card is a light green open weave pattern, through which a lighter greenish-yellow background color is seen. It would not be possible to determine whether the cards were upright or reversed before they were turned over.

The faces of the cards carry the same white, followed by black border. The illustrations themselves are in the style of a line drawing which is then colored in. In the accompanying 153 page book, Leslie groups the cards by their attributes, and presents them with a black and white scan, upright and reversed meanings, direction, time, pace of change, and a short paragraph talking about the nature of the card.

One of my favorite spirit animals is the Bear. In Native American tradition, the Bear is the symbol for the West, and intuition. It is Bear who often acts as a guide when journeying. In this card, we see a brown Bear standing on all four legs in the middle of a stream, facing us. In the background we see a mountain and blue sky. Leslie defines the upright meaning of Bear as "protection, strength and introspection". He defines the reversed meaning as "aggression, cowardice and anger". The direction is "1-15 degrees", the time is "late December, 12-1 am," and the pace of change is "very slow to start, becoming active suddenly; vigilance leading to protection". Bear upright means protection, while in the reversed position it indicates danger.

One of my favorite elementals is the Gnome, the elemental of Earth. Here we see an older Gnome, with a long white beard, red jacket and cap, standing in a field of daisies, holding on to the stem of a daisy (which is taller than he is!). The upright meaning of the Gnome is "the physical, pleasure of the senses, the natural world, riches". The reversed meaning is "materialism, skepticism, overindulgence, physical neglect". The direction is North, the time is "winter, midnight", and the pace of change is "very slow". In a reading, the Gnome indicates manifestation on the physical plane. A reversed Gnome may indicate over-reliance on the physical aspects of the world.

Quintessence is a marvelous card - a bright yellow circle in the center, surrounded by outgoing orange-red rays on a background of bright yellow. The background color of the four corners is dark blue. Upright , it stands for "harmony and balance". There is no reversed meaning. The direction is "the center", the time is "eternity", and the pace of change indicates that: "either a state of balance has been attained, or that this state will be reached suddenly in the very near future". In a reading, Quintessence refers to spirituality and mystical union.

Wodewose is a prototypical "Green Man": appearing on this card as a face made up of leaves in shades of green, red and gray. This is a stunning card! Upright, it means "manifestation, gradual development and tenacity". Reversed, it means "inertia, failure, selfishness". The direction is "North", the time "December, Winter, Solstice, midnight", the pace of change "slowly over a long period of time, changing suddenly". In a reading, Wodewose, the spirit of the woods, combines the practical qualities of Earth with the fiery energy of Fire, leading to manifestation. Wodwose reversed refers to a state of inertia.

I found it easy to connect with the images on these cards, and can see several ways to use them not only in divination, but in meditation, ritual and ceremony. Those in the magical fields will find these cards a great reference, while those not having studied magic, but who are drawn to the cards, have a "safe" venue for exploration and personal transformation. This deck/book set are powerful tools of transformation, able to be used by anyone and everyone. I highly recommend them!

The Magical Menagerie holds magical creatures, domestic animals and wildlife from Greek and Celtic myth and tradition in a divinatory deck of 42 cards. The deck is a concept from Mike Leslie, an English psychiatric nurse with experience in psychological assessment, psychotherapy, and counseling.

Mike teamed up with Canadian illustrator Eric Hotz to create attractive cards representing real and mythical animals that have magical significance and characterise certain spiritual and elemental qualities. The deck is based on the system of elements – Earth, Air, Fire, and Water – developed in ancient Greece, which have also been linked here with Jung’s system of basic psychological attributes: sensing, thinking, intuition and feeling.

The backs of the cards have a woven diagonal green on cream design with a white border, while the faces of the cards have white borders around a freehand-style black inner border and the animal’s name and elemental associations are printed at the base. The whole Magical Menagerie set is packaged in a cardboard case that opens out from the front. Inside are the 42 cards, the Companion Guide to The Magical Menagerie, a black organdie drawstring bag, and a removable cardboard deck box with instructions on caring for your cards. There are also two extra cards included with the deck: The Wheel of the Elements, which gives basic associations for each element, and the Menagerie Wheel, which links all of the real and mythical animals with their elements.

The Companion Guide to the Magical Menagerie (or the Bestiary) is a 168-page guidebook for using the cards. It has five chapters containing enough information for anyone to pick up the deck and get started straight away. The book offers background and basis for the deck and the elemental system; Tarot spreads utilizing 1, 3, 4 and 5 cards, sample readings, and timing factors; a chapter on the Art of Divination, which talks about the mechanics of reading and revealing what is hidden, and the card meanings. This section shows card image in black and white, above upright and reversed keyword meanings, associations with direction, time, pace of change, the card title and keyword, and a decent explanation of the animal’s associations and interpretations.

In Celtic myth, Dog is most closely associated with Cu Chulainn, “the house of Chulainn”. The keyword for Dog is loyalty. Dogs are believed to be the first domesticated animals and have been companions of humans since the earliest times. They would have been valued for their devotion, friendship, and allegiance to the tribe because of their warning and protective functions. As well as guardians, they would have become valued as hunting companions. Being pack animals, social relationships and rules are of great importance to them. Dog also represents the guardian of the entrance to the Otherworld, the realm of the dead and the secrets that lie beyond. Dog therefore signals the closeness of the Otherworld and guides those who enter this realm.

Dog reversed indicates disloyalty, deceit, an enemy, and possible attack. There may be mistrust of others, social exclusion, or an outsider. Dog reversed also refers to ignoring social rules and traditions and antisocial behavior. This aspect of Dog refers to the underdog and an inability to act independently. Folklore is replete with tales of phantom black dogs that haunt byways and mislead travelers, depression is sometimes described as a black dog. There may be a morbid fascination with dead, a fear or death, or inability to adapt to loss. Dog reversed can refer to unquiet spirits.

The Magical Menagerie honours the spirit of animals and has more depth than is immediately apparent on the surface. It is designed for spiritual guidance, self-understanding, problem-solving, and most especially divination of future trends.