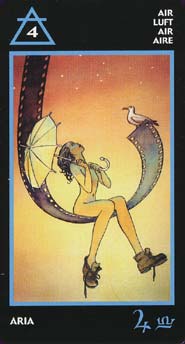 By Italian comic-book artist Milo Manara, this tarot is a mix of eroticism and fantasy. Its imagery does contain images of the human form, similar to the Casanova Tarot, but it doesn't go to extremes. 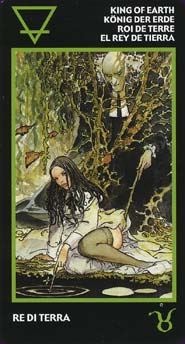 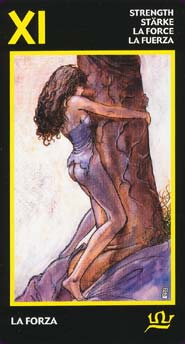 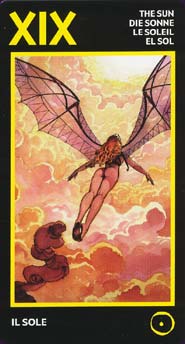 The deck was painted by Italian artist Milo Manara, famous for his erotic graphic novels, and attempts to use sexual imagery to portray traditional Tarot interpretations. Some Tarot readers are put off by the fact that Manara did not design a deck from scratch but took images from his previously published works. Designing a Tarot card is finding an image to express an idea or meaning, and whether that image is created on the spot or taken from an existing collection makes no difference to me. Such is the nature of archetypes. Collage and photographic decks often use preexisting images to convey meaning. That being said, many of the images in this deck are a far cry from traditional Tarot imagery. Even with the help of the LWB it is often a stretch from the scene on a card to its interpretation. Part of the problem lies in that the meanings are not always immediately evident and could be interpreted differently depending on the reader. For instance, Seven of Earth shows a half-dressed woman reading a letter while a man stands watching in the doorway unbeknownst to her. On first glance, the image might seem ominous, but on further examination maybe he is only awaiting her reaction to what shes reading. Its not the Rider-Waite man in his garden, but it still implies the feelings of anticipation and lack of control. These discrepencies in interpretation can also be found in other decks and shouldnt be counted against Manara.

The structure of the deck is a standard 78 cards, but for some reason, possibly extending the Italian tradition, two of the Major Arcana cards have been renamed. The Wheel of Fortune and The Hanged Man become The Mirror and The Punishment respectively, and unfortunately, the deck is none the better for the change. Justice is numbered VIII and Strength is numbered XI. The suits have been renamed to reflect their corresponding elements. Wands become Fire, Swords are Air, Cups are Water, and Pentacles are Earth. Except maybe for the aces, which all just close ups of beautiful women, Manara does a fairly decent job of conveying the feeling of the elements throughout each suit. Court cards are Kings, Queens, Knights, and Knaves. Knights are both men and women while Knaves are only male.

Unlike some erotic decks, women in Manaras Tarot are not merely objects for men to enjoy. Manara often depicts his women in a position of power, controlling the escapades on many cards. This is especially true of the Fire suit. Manara uses a nice combination of humor, sensuality, and mystery to convey meanings. Many of the cards are not even remotely sexual which brings a relaxed and balanced feel to the overall deck. The Knave of Air is a handy man, in uniform, bopping around to the music on his headphones. Even the sexual scenes are relatively tasteful. Only one card, the Three of Earth, might show intercourse (its hard to tell from the angle), and even the oral sex isnt as graphic as some other, less beautiful decks.

Please be warned that some of the images may be disturbing to even the least straight-laced because of the sense of danger to women in certain cards. The most unsettling card is probably the Ten of Fire in which a woman struggles against a man who is very obviously trying to rape her. This is as violent as the deck gets, and I am of the opinion that a sexually explicit Tarot deck should probably include both the positive and negative aspects of sex.

The cards are printed on sturdy cardstock and measure about 4 inches (12 cm) by 2 inches (6 cm). The backs are reversible and depict a woman teasing two men on a park bench, one of my favorite scenes of the deck. Variations of this scene are repeated on the Two of Earth and Three of Fire (this last card might qualify as no longer teasing). The borders are large, and titles are in English, German, French, Spanish and Italian. Astrological correspondences are included on the bottom of each card and play heavily in the meanings given by the LWB.

The cards themselves are reversible and are decent quality. A bit on the thin side but nothing too horrible. What I really like is the cards themselves each have a black background/border giving off a mysterious sensual feeling. The images are similar to a French styled comic strip, with some cards reminding me of Luis Royo except on a much more fun side, if that makes any sense. Each card has an astrological sign on every single card. I've heard not all signs match up correctly but that doesn't bother me.

Now some may call me crazy but for once the LWB I found to be quite good. The meanings provided are typical one or so words with simple meanings. They work extremely well for most of the cards imaginary. The suits are changed to the four elements, earth, air, water, and fire. I actually really like what they did here as this deck is clearly meant for dealing with sexual related issues rather than trying to stick to traditional RWS meanings.

Water represents imagination, the sense of sight, spiritual and emotional realm. Water controls mental day dreams, mental images, the lure of the unknown, and the adventurous situations. It is also that part of the attraction which comes from what is irrational, and from romantic desire.

Earth represents the instinct, the sense of touch and the physical material world. The earth governs the body and our knowledge of it and also the instincts and sensations which this knowledge brings about. It is also relationship with the self and one’s inner being.

Air represents seduction, the sense of smell, change through the conflict of opposing forces, the mind, intelligence, being rationale, playing games of seduction and/or the method of seeking or soliciting of sexual favors, sex without undressing.

Fire represents warmth and intensity. It is the sense of taste, passion, creativity, desire, ambition and satisfaction. It is also the area of sin and perverse sin.

I find this deck is excellent at providing insight for clients asking questions regarding sex and providing insight if something is lacking, in perfect balance, or in excess. One of my favorite cards is the Knight of Fire, depicting a woman on a horse riding off looking for adventure. I designed a spread that uses this card that helps the querrant answer 'how can I invite a sense of sexual adventure into my life? The deck is excellent at answering these types of questions.

Finally, this deck is also good for doing readings with couples. I was very happy to hear from clients when using this deck for the first time that my readings were dead on.