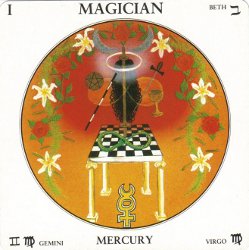 The Mandala Astrological Tarot has 78 square cards, combining astrology and mandalas into an unusual tarot system. The major arcana have complex scenes while the minor arcana rely on geometric suit arrangements and astrological symbols. 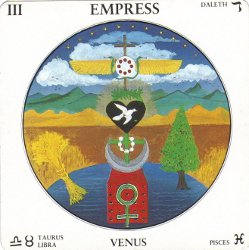 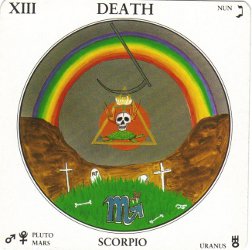 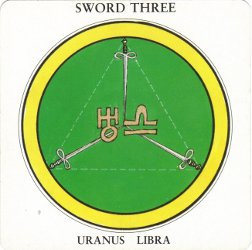 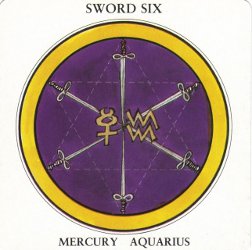 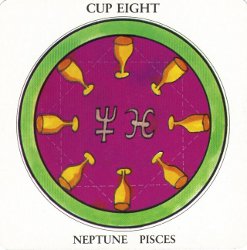 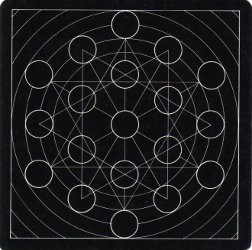 The Mandala Astrological Tarot was published as a book/deck set, using an astrological base for the 78 cards of the Tarot. The concept for this deck is in many ways unusual: the cards are square, with the illustrations in a circular, mandala like format.

Each illustration in the companion book is presented as a mandala - including the illustration of the Tree of Life at the beginning of the book. It is quite interesting to look at this illustration, because every time you do, you see more and more layers. In and of itself, this illustration is an excellent teaching tool.

A short history of the Tarot begins the book. Mann notes that while the Tarot has at times been attributed to claim Egyptian roots, it actually has roots in the fourteenth century Europe. Also noted is that the images from the early Tarot decks reflect the structure of the medieval world, especially through such cards as the Kings, Queens, the Chariot, the Lovers, the Pope, the Magician and the Fool. The four suits were depicted as common instruments of the time.

Mann also discusses the involvement of the Church, and how the Tarot was used by certain initiates as a means of transmitting hidden knowledge. (For the majority of the populace, it remained simply a game.)

An aside in the discourse on history describes a very nontraditional Tarot deck - the Baldini-Mantegna Tarot - as being based on five classes of cards. I thought this concept was interesting enough to include here:

Class A: The Celestial Systems (The First Cause, The First Movement, The Sphere of the Fixed Stars (the Zodiac), Saturn, Jupiter, Mars, the Sun, Venus, Mercury and the Moon)

The organization of the Mandala Astrological Tarot is by astrological associations, something that goes far beyond placing a few glyphs on the cards and calling it good. Mann discusses the symbolical nature of the Tarot, and how the imagery leads the reader to discover for themselves the layers of meaning within the cards. The Mandala Astrological Tarot differs in a significant manner in that there are no human images, not in the Major Arcana, nor in the Court Cards.

The imagery of the Mandala Astrological Tarot is defined as being representative of the tableaux of initiation seen in Egyptian mystery temples, with the appropriate scenery, imagery, colors and textures, symbolic costumes and ritual implements.

The mandala format is used as a symbol of the a sacred place. In Mann's words, "Mandala images bring heavenly essence down into manifestation." The mandala is a diagram of concentric circles, a protected space where archetypal images are represented as an ideal landscape.

The square geometry of the cards allows the four sides to be associated with the four cardinal directions - above, below, left and right. The astrological significance of these positions provides an insight into the orientation of the card being expressed (in rectangular cards, this is most often expressed in terms of upright and reversed orientation). Each card in the astrological system therefore has four distinct meanings. In the upright position, the influence of the card is conscious. In the reversed position, the influence of the card is unconscious. With the heading to the left, the influence emanates from the personality. With the heading to the right, the influence emanates from one's partner or the outside world.

To begin the orientation towards astrology, Mann presents a chart that breaks the Major Arcana down into the Elements (Air, Water and Fire), the Seven Planets, and the Twelve Signs of the Zodiac. Note: Earth is seen not as an individual card, but as the entire Major Arcana. The four suits are charted using the following associations: Element, Card Suit, Body, Function, Astrology, Cardinal Queen, Fixed King and Mutable Prince. He defines the personal planets (Sun, Moon, Mercury, Venus, Mars, Jupiter and Saturn), and the collective planets (Uranus, Neptune, Pluto and the Moon's Node). Three major symbols are defined, with each planet being made up of combinations of these symbols: the Circle (representing pure Spirit), the Half Circle or Crescent (representing Soul) and the Cross (representing Matter or Body).

For a deeper understanding of the signs of the Zodiac, Mann presents a chart with the Elemental association, masculine/feminine ordination, and Cardinal/Fixed/Mutable association, along with the qualities that each sign represents. There are also a short but very important sections on color associations and the Zodiac signs, the symbols within the cards (arrows, hearts, keys etc) and their meanings, and the Kabbalah and the association of the three mother letters, the seven double letters and the twelve simple letters with the cards of the Major Arcana.

The Major Arcana is seen in the traditional sense of representing the process of enlightenment. Traditional titles are used, with Strength as VIII and Justice as XI. Each card is presented with a full color illustration, the card number, element, planet, Kabbalistic letter and association, a description of the traditional Tarot card, the symbolism, divinatory meaning and reversed meaning (which is strange, since there are four meanings to each of the cards in this deck). From the book:

An ancient wise man, almost totally hidden by his hooded cloak, starts out on a journey across a vast valley of life experiences. His lantern hides the light of God and he supports his weight with a spiritual staff. A serpent writhes on the barren ground at his feet.

The Symbolism of the Hermit

Mercury fertilizes itself and transforms simplicity into understanding by releasing conflicting pictures to achieve harmony through the application of perceptive mind. The staff is divided into sections, representing the seven sacred centres and the seven planets in the heavens, and it bridges the space between the barren and fruitful trees, between which also hang the rainbow veil of illusury pictures of the world. The cloak obscures the Hermit's true esoteric identity until his quest has reached its conclusion on top of the distant mountain at the ordained time. The search is lonely, but the way is enlightened by the lantern of faith emblazoned with the Seal of Solomon, the symbol of integration of downward emotional and physical impulses and upward intellectual and spiritual aspirations.

The emphasis on hidden meanings must be overcome patiently with introspection and meditation. Through renunciation and service wisdom may be attained. Lonely travel towards a distant goal. Withdrawal from the world is beneficial.

Concealment and disguise mask true intentions. Unreasonable caution and fear of exposure. Obsession with physical perfection. The opposite quality is the Moon and Pisces indicating sacrifice.

In his section on interpreting the Tarot, Mann addresses formulating the question, telling the story, shuffling and laying out the cards, and card orientation. A variety of spreads are presented, including a one card spread, the Crossing Challenges (placing one card on top of another), a three card Past/Present/Future spread, the traditional Celtic Cross spread, and an Astrological spread. Full color illustrations are included.

The cards themselves are 3 1/2" by 3 1/2" on sturdy, glossy, high quality card stock. The backs show a black background, with white lines outlining a black square, inset with radiating, concentric circles. Superimposed on this is a series of five lines of smaller circles.

The card faces show a white background surrounding a circular, full color illustration. The Major Arcana show both symbols and scenery. The card title is across the top of the card in black letters. The card number is in the upper left hand corner, the Kabbalistic letter and glyph are in the upper right hand corner, the Element and planet appear in the middle of the card, on the bottom, with the lower left and right hand corners show planets and their planetary glyphs.

For the Court cards (king, Queen, Prince and Princess), the suit and title are listed in black across the top of he card, with the Element and symbol (Crown for King, Throne for Queens, Chariots for Princes, Palaces for Princesses) across the bottom of the card. The Court Cards include symbols and illustrations.

I loved the process of working with the mandala concept, and found that the symbols became easy to interpret once I mentally placed them within the Upper/Lower, Right/Left template. While the art in this deck is not exceptional, it is not bad either, and the colors are vibrant and alive.

I would not recommend this deck for a beginning Tarot student, but it is a wonderful collectors deck, and a great deck for working with astrological associations. The emphasis given on symbols, and the explanations for the symbols, are a great heads up on their own. The end chapter, a section on meditation, gifts the reader with ways to connect with the cards that deepens their understanding of the card and of themselves.