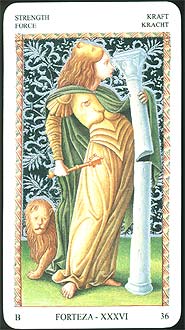 This wonderful deck is a tarot ancestor, with only fifty cards. The Mantegna Tarot artwork, originally created in 1460, has been recoloured and highlighted with silver. What appears as mottled dark grey in the digital scans is actually bright silver foil.


Card Images from the Mantegna Tarot 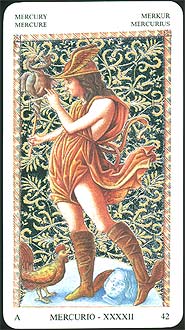 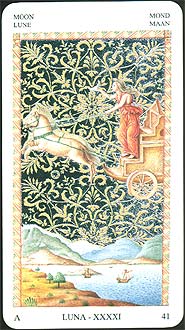 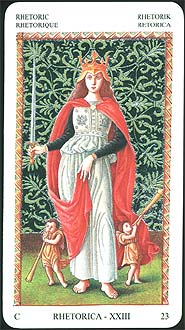 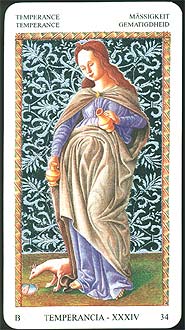 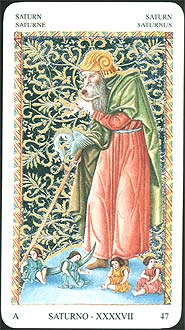 The Mantegna deck is an ancestor to the 78 card tarot deck with major and minor arcana as we know it today. The fifty original engravings created by an Italian artist have been dated to around 1460.

Many artists have recopied the original Mantegna artwork. Atanas Atanassov is the latest, redesigning and painting the cards in soft pastel colours and flesh tones. What would normally be the sky or background to a human figure is a kind of fine, flowered tracery raised slightly above the textured silver foil. Like Nefertari's Tarot, which is also published by Lo Scarabeo, the Mantegna Tarot uses a metal foil treatment on the cards. Nerfertari's was sumptous gold, but the Mantega is a cool silver.

As a tarot deck reflects the attitudes and human situations of its time, the Mantegna deck is an insight into the medieval society. The deck is divided into five classes of figures, each of ten cards: Human Conditions, Apollo and the Muses, Arts and Sciences, Geniuses and Virtues, and Planets and Celestial Spheres.

Human Conditions are ten cards in ascending order; Pauper, Servant, Artisan, Merchant, Gentleman, Knight, Duke, King, Emperor, and finally 'Papa' (the High Priest). Apollo and the Muses, are, of course, just that - Apollo and the Nine Muses. Calliope, Clio, Euterpe and so on. The Arts and Sciences are Grammar, Logic, Rhetoric, Geometry, Arithmetic, Music, Poetry, Philosophy, Astrology and Theology.

Intellect, Senses, Vital functions, Temperance, Prudence, Strength, Justice, Charity, Hope, and Faith (titles are approximate translations from the original Italian) make up the Geniuses and Virtues. The Planets and Celestial Spheres are those known in Renaissance times: The Moon, the Sun, Mercury, Venus, Mars, Jove (Jupiter) and Saturn; plus cards for the Upper Heavens, Celestial Power and Divine Light. Also included with the deck are 25 explanatory cards, each showing smaller versions of two cards (without the silver enhancement) and two explanatory keywords in six languages.

The card borders of the divinatory cards are white with text printed in black. Italian is, of course, the major language of the deck, but smaller print lists the title of the deck in four other languages, including English. Each card also has a letter corresponding to its class (A, B, C, D or E) and a number, used when playing The Chessboard Game. The back of the cards are the same flowery pattern used in the card backgrounds, just enlarged slightly and in white or blue.

The little white booklet included with the Mantegna gives a brief deck history, card outlines, and instructions for The Chessboard Game, a complicated type of oracular solitaire. Play the game, then divine from the cards remaining at the end of the game.

I found the Mantegna Tarot fascinating. Personally, I would purchase it for the historical value alone, though the quality of the art and its unusual treatment would appeal even if my tarot knowledge was non-existent. The Mantegna is a mandatory addition to anyone's collection. Make sure you add it to yours.