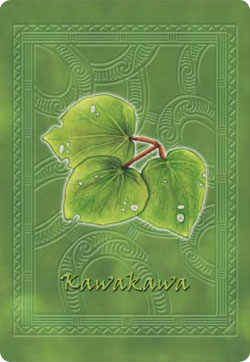 The Maori Oracle is a natural and beautiful deck of 58 cards from New Zealand artist, P.A. Minnell. Each card features a 'tohu', or sign, significant to the Maori. The deck honours the native tradition of seeking advice and guidance from ancestors and loved ones.


Card Images from the Maori Oracle 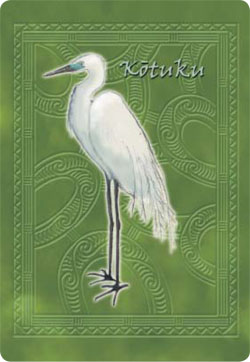 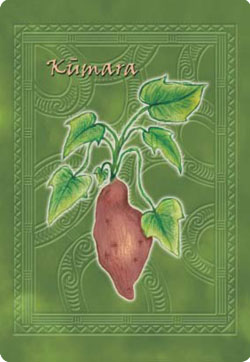 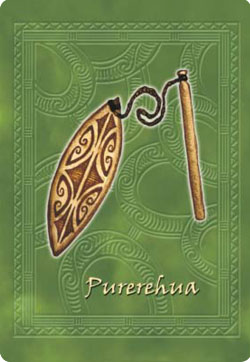 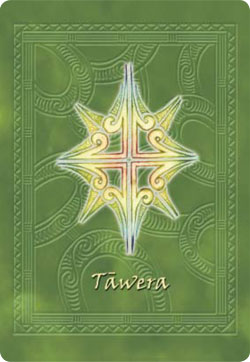 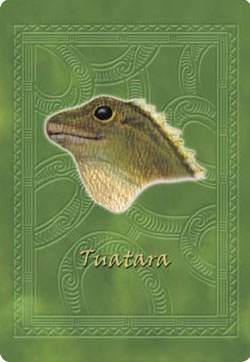 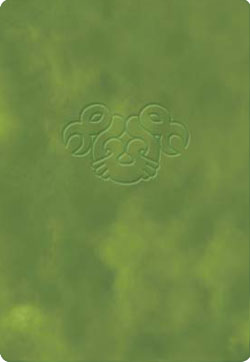 The “Maori Oracle” is a set of 58 oracle cards with an 80 page companion book. The cards are based on the New Zealand Maori tradition of seeking guidance and advice from our ancestors and loved ones who reside beyond the veil. Incorporated into this deck are many teaching stories and portents that are still used by Maori tribes all over New Zealand. The images in this deck act as pathways for the universal language of Spirit.

The deck and book are packaged in a sturdy box, with the trademark Schiffer magnetic lid. (It is a great comfort to know that decks like this can be stored safely. In the course of life things do get knocked over … with this lid, nothing is going to fall out and get lost or damaged.)

The cover for the companion book shows beautiful green leaves, along with a stunning image of the mawhaiwhai (spider web) left behind by the spiders that helped the first carver, Ruatepupuke. The back shows beautiful imagery, divided into quadrants. In her introduction, Minnell makes a good statement about the belief that many traditions hold that guidance can be sought from our ancestors … those who have passed on. For the Maori, from the bond between the living and the dead comes personal strength and a sense of purpose. She also notes that while there are some who believe that Maori ways should only be taught to the Maori, there are those who believe that its survival lies in teaching it to anyone who wants to learn it.

There is a section on Maori spirituality (noting that the New Zealand Maori have always had a rich magical tradition), followed by a section on Maori pronunciation. Words are vibration, so pronouncing the Maori names correctly calls in the energy that was meant for each of the cards (this is IMHO, not something that Minnell puts forward). In “About the Cards”, Minnell notes that the birds, plants, objects, and stories featured in the cards are considered by many to be Taonga, or national treasures. The green background that each image is superimposed on imitates the Pounamu, or greenstone, which essentially is New Zealand jade. This is a highly prized stone, and one solitary polished piece was handed down through the generations, just as the Maori stories are.

The patterns in the background of the cards have multiple meanings. The outermost border pattern is called Pakati, and means both protection and prosperity. The second border represents the lashed Raupo that is done across the tops of Waka Mokihi (bulrush canoes), used by the Kati Mamoe tribe from the South Island of New Zealand (the author’s tribe). The internal pattern was inspired by a canoe bailer from the Kati Mamoe tribe, and is directly symbolic of successful travel.

The cards are considered sacred, and should be handled accordingly. Minnell lists a few of the Maori customs related to the treatment of sacred objects:

1. They mustn’t come into contact with cooked food or drink.
2. They mustn’t be taken into a kitchen, laundry, bathroom, or toilet.
3. They shouldn’t be handled by anyone but the person they were intended for.


There is a section on working with the cards and reading them. The cards are cut into three stacks, or “baskets”. The first basket, Te Kete Aronui, is the knowledge of the physical world. The second basket, Te Kete Tuatea, is the knowledge of ceremonies, customs, laws, and what is right and just. The third basket, Te Kete Tuauri, relates to knowledge that is concealed … magical knowledge, spiritual knowledge, and the world which you cannot see. Several sample readings are presented to show how the cards are interpreted. At the end of this section are two prayers - Karakia Karanga (A Calling Prayer), and Karakia Poroaki (A Farewell Prayer).

The cards are presented with a black and white image, the name of the card, pronunciation of the name, the energy the card carries, and what the card means in life.

At the end of the book is a glossary, bibliography and recommended reading, and a biography of the author/artist.

The cards themselves are 3.5” by 5”, of sturdy, glassy card stock. The backs are a moss green, with an image in the same color just above the center of the card, meaning that the cards are not reversible. The card faces are the same moss green, with the image of a frame superimposed on it. The image itself is in the center of the card – a single image, with the card title in script, in white, across the bottom of the card.

One of the great things about this deck is that it can be used by individuals from any culture or tradition to reconnect with their own heritage and ancestors. The cards act as a pathway, or conduit, for messages from the other side … from one’s own ancestors. What a great thing to know that we are not alone!

This deck is very gentle, and can easily be used by people of all ages, including children. A welcome tool of empowerment for those looking for personal growth.