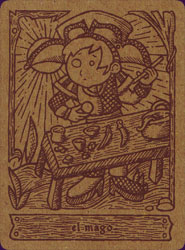 The Tarot de Marcelino is a Marseilles-inspired deck in a very quirky and distinct style, from the 'Not-So-Master of Cutesy Cards' (otherwise known as Lynyrd Narciso). It's a full 78-card deck, but does have pips rather than illustrated minor arcana. It's printed in burgundy ink on unbleached paper, and has been published in a limited edition of 70 decks. 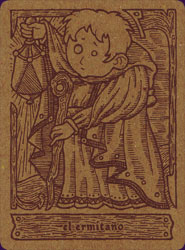 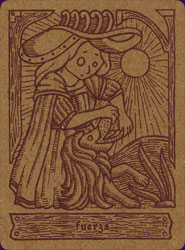 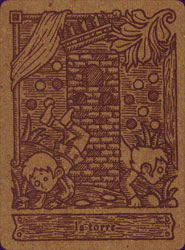 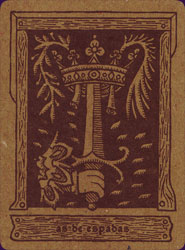 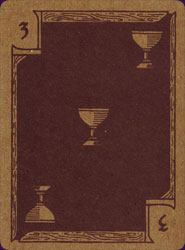 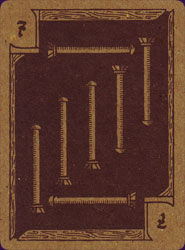 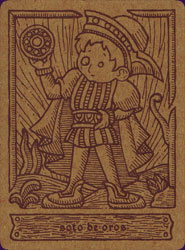 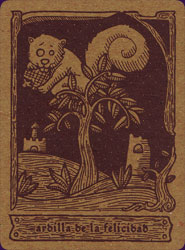 The Philippines-based artist, Lynyrd Narciso has a reputation for cute and beautiful decks, having previously created the Vanessa Tarot, the Tarot of the Lepidopteran People, Les Adorables Tarot, and his early Sailor Tarot. His artistic style is usually diverse, with each deck having a noticeably different look as well as theme, and his latest is no exception.

El Tarot de Marcelino is a wonderfully quirky little deck which combines an amusing back story with cards based on the European traditional rather than the Rider-Waite. The story behind the cards begins thus:

“This remarkable series of images was discovered amongst other personal possessions of one Alestra Crawling, Marchioness of Whaite (one of them a very telling diary filled with the scandals and intrigues of the members of the Gilded Dawn Club). They were presumably a copy of an older set of woodcuts done by a master following the Marseilles tradition.”

I won’t spoil the rest of the booklet for you, other than to quote Lynyrd’s apt description of the style of the cards:

“Since during those times, engravers did not generally sign their work, experts have found it convenient to refer to the creators of these images as the Not-So-Master of Cutesy Cards. His style is characterised by a general pudginess of the faces of the figures, a charming imbalance in eye sizes, and four-fingered hands.”

The 79 cards of the deck has figures as described, which gives them a somewhat quizzical expression and a link to the world of The Simpsons. As is typical for Marseilles-style decks, the numbered suit cards aren’t scenic, but these are undecorated even by Marseilles standards.: they simply show the suit elements (eight swords, three cups, etc) in a geometric arrangement and without embellishment. There is also a very modern and increasingly popular additional card in the deck – the 'arbilla de la felicidad', or The Happy Squirrel.

The deck and its booklet have a very environmentally friendly appearance, as they’ve been printed on recycled, unbleached and uncoated paper. The outer box is similar, and has tiny leaves and ferns printed on it, and ties closed with a burgundy ribbon. (Which also matches the cards – they were printed in burgundy ink.)

Along with the 79 tarot cards, the set has two extra cards: one a title card in English, and the other with some text in Filipino, including the number of the set and Lynyrd’s signature. There’s also the unmissable booklet titled ‘el Tarot de Marcelino’, which is printed in English, though the titles printed on the trumps, courts and aces are in Spanish.

The set is a work of art, self-published by Lynyrd himself and available directly from him on eBay for US$88.00. It may not be an everyday reading deck, but it’s wonderful to see more Marseilles-inspired decks that add some humour and a touch of modernity to a serious traditional deck.