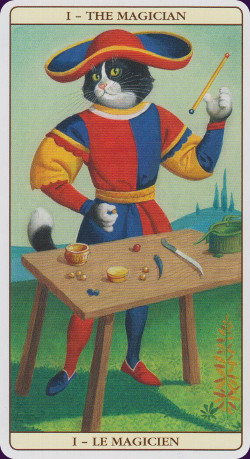 The Marseille Cat Tarot light-heartedly merges the historical French tarot tradition and anthropomorphic cats, with various furry felines in place of the human characters on the cards. The deck is illustrated with strong primary colours, but more refined artwork than the traditional woodcut prints. The minor arcana also have small feline scenes amidst the pips. 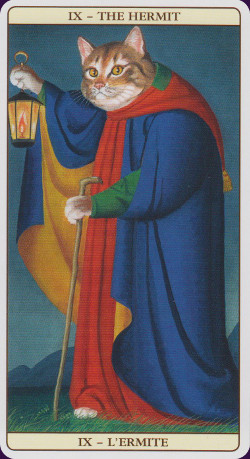 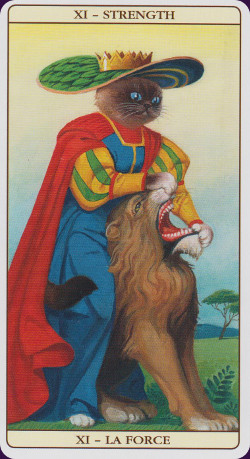 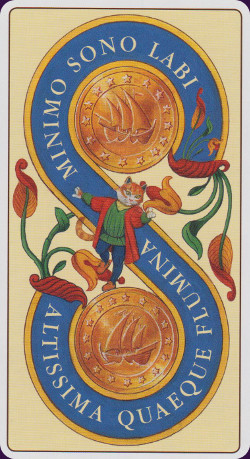 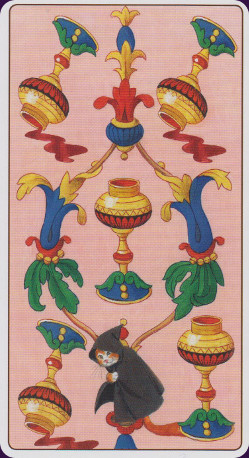 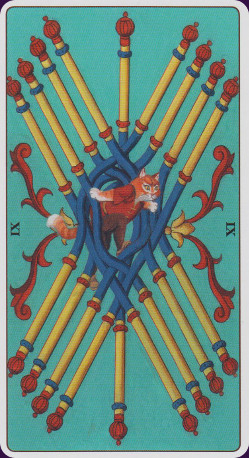 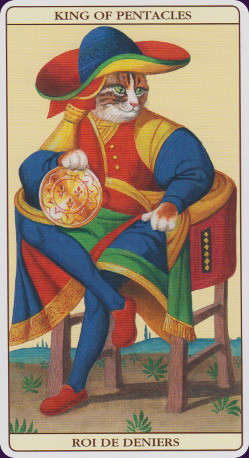 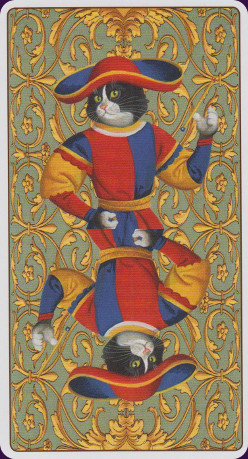 I admit that I opened this deck with a sense of trepidation. On one hand, the Marseille tarot is an icon, much revered and holding a sacred space among many Tarot collections. It represents, after all, both the seed and the roots of modern Tarot decks. On the other, a cat theme seemed incongruous with the profound, almost serious nature of Marseille. Anyone who is owned by a cat will know what I’m talking about*.

I am happy to say that the Marseille Cat Tarot is an effortless fusion of the old structure with a carefree, joyous theme. A key benefit of this deck is the fact it has retained both the colour scheme, and the Major and Minor Arcana aesthetics, of the original deck. Thus it presents, as far as possible, the classic Marseille model, with minor variations and additions of cats throughout. These additions do not dominate the cards, or distract from their inherent Marseille quality, rather they enhance them.

The Minor Arcana cards have colour backgrounds according to each suit: a salmon-pink for cups, blue for swords, light cream for pentacles and turquoise for wands. This makes it easier to distinguish between the suits, and in addition swords are symbolically clearly differentiated from wands, which is of great help considering how similar (and confusing) these two suits are presented in the early Marseille decks. Subtle additions, such as the introduction of images associated with material matters at the centre of each pentacle, aid in understanding – for example, the 6 of Pentacles has a balance symbol, whereas the 9 of Pentacles has a hooded falcon, at the centre of each pentacle in the card.

The geometric arrangement of the elements in each suit is true to classic Marseille form, including the leaf and floral decorations, with some minor variations.

The deck sometimes takes the concepts presented in the Rider Waite Smith deck, and partially, yet strategically, places these within the Minor Arcana via cat interactions. This makes the deck a lot less intimidating, and much more easier to read, than the original. The downside to this approach – and it is a crucial one – is that it narrows the meaning of a particular card to the same meaning of that card expounded in the Rider Waite Smith deck. This is evident, for example, in cards such as the 6 of Swords, where we see three cats in a boat at the centre of the card.

Finally, I would like to note that the little white booklet has a useful introduction to the Marseille deck, including its history, and interestingly, details the appearance of the cat in the Fool card in the Dodal Marseille deck, as well as the general history and associations of the cat with Tarot. The booklet gives both upright and reversed keywords for each card, although unfortunately these are far too narrow and simplistic – for example, for the 3 of Pentacles, it gives loyalty (upright) and resignation (reversed).

Overall this is a great, jovial and fun deck to work with, and also to explore the Marseille tradition.

* The author may be a total cat fan, and this may affect the objectivity of this review.