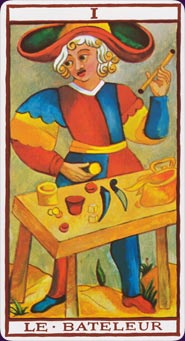 The Fournier-published Tarot de Marseille sticks fairly closely to the traditional symbolism but uses much more blended, rich, flowing colour than the early woodcuts. The background colours are also a modern addition. 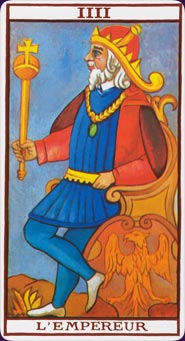 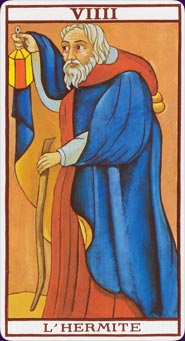 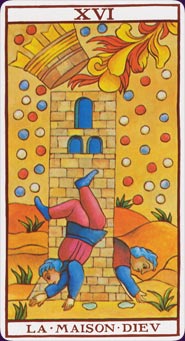 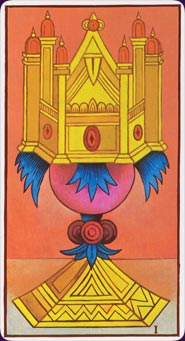 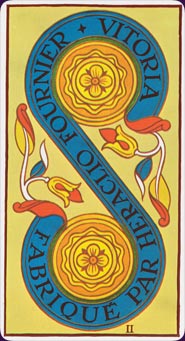 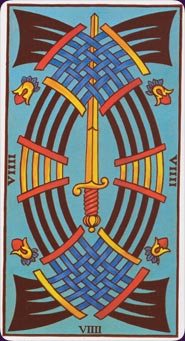 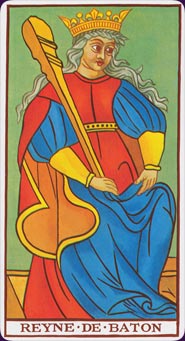 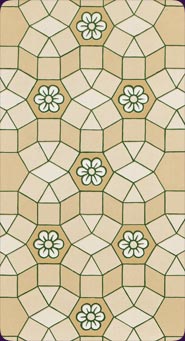 ‘Le Tarot of Marseille’ was first published by in 1983 by Heraclio Fournier of Spain. This is a recoloured version by artist A. Aymerich of the famous Conver deck from the 1500’s. The line drawing appear identical to those of the Grimaud ‘Ancient Tarot of Marseille’ which is a cleaned up version by Tarot author and former Grimaud head person Paul Marteau. The line drawings of this deck have became for many Marseille Tarot fans the ‘classic’ Marseille images. It is clear that the author of this deck wanted to retain the clean images of the Grimaud Marseille, but make them more colourful and attractive to modern Tarot enthusiasts.

The title card reads ‘Traditional designs reinforced by a suggestive and beautiful colouring’ and this seems like a most appropriate description for this beautifully emotive Tarot pack. The deck retains the original colours of the Grimaud Marseille deck in various shades/tints while adding purple and pink to the mix. A key characteristic of this deck are the colour coded suit (Ace through King) cards. There does not seem to be any concrete evidence that provides a reason for the suit colourings of this deck. It may be surmised that Batons (Green) represent spring, Cups (Orange/pink) represent summer, Coins (yellow-tan) represent autumn and Swords (light blue) represent winter. The little white instruction book appears to be based on the divinatory meanings of the Hermetic Golden Dawn so this suggests that Batons = fire, Cups = Water, Coins = earth and swords = air. Some feel the suit colours of cups and wands are incorrect, but when looked at as Cups = love/emotion and wands = new/beginnings, the colouring is easier to work with.

As much as the modern colouring of this deck updates and illuminates the Marseille Tarot, most of the original nuances and charm of the original Conver Grimaud deck still remain intact within this deck. Most of the hair colour remains the same and the colouring of the clothes is like the original. Unlike some other Marseille recoloured versions the Fournier deck has not added any extra foliage or symbolism to so-called liven up the images. The backgrounds are all painted a pleasant solid colour.

The cards measure a very comfortable and portable 11cm x 6cm. The back of the deck is a tan/beige/white pattern that resembles stained glass. The octagon shapes with the flower within (hexagram) bring to mind a medieval type of cross shape. The backs have a very soothing effect and seem to complement the old world charm of this wonderful European Tarot pack. The titles are all in French using a traditional font in brown ink.

I have always viewed the ‘Tarot De Marseille’ as a holy sacred book and I feel the work done on this deck has been done with reverence and respect. Fournier have done an outstanding job on recolouring the most beautiful and respected tarot deck in the world, the beloved Marseille pack.