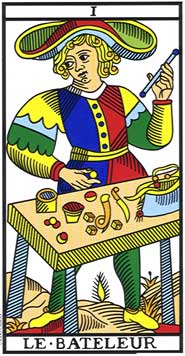 Camoin and Jodorowski, French Tarot scholars, have restored crisp detail and outlines in their variation of the Tarot of Marseilles woodcut images. 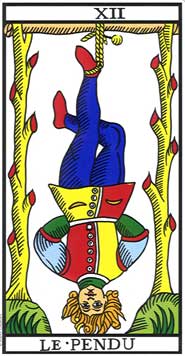 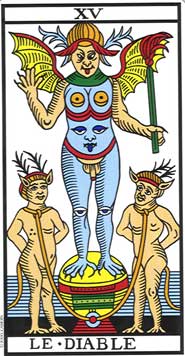 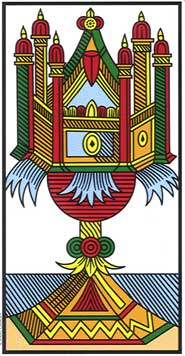 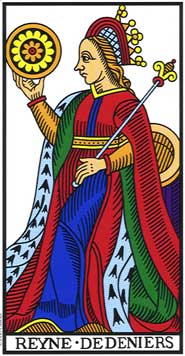 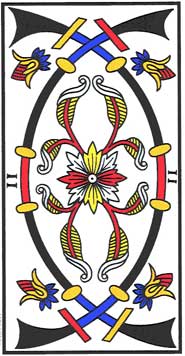 There are numerous Tarot decks in print that use the appellation Tarot of Marseilles. Many, of course, are not published nor printed in Marseilles, but follow the designs commonly associated with this southern French maritime city.

The creators of this deck, one of whom is a descendent of Conver family, utilised and compared various versions of this style of deck, and sought to re-create it to its original splendour. It is obvious that they were principally, but not solely, influenced by the early (1761) Nicholas Conver deck. This latter deck, incidentally, is still available as a reprint from three publishers: as a limited edition cardboard collector's deck from Camoin house, from Lo Scarabeo in Italy, and from Heron in Bordeaux (in my view, the best edition).

Though both Jodorowski and Camoin had access to many historical representations, they on occasions times opted for the more familiar Marteau colouring (as found in the more popular Grimaud version of the Marseilles deck), and 'added' clarity to many aspects which were only hinted at in the earlier versions (such as the hind-legs of the horses on the Chariot, or the 'snake' at the bottom of Temperance, or again the 'ramp' upon which the figure of the Star kneels upon). In two of these and yet other cases, I personally would have p the ambiguity to remain.

In some instances, they have clearly drawn from an old oral tradition, which was then incorporated their depiction, even if it meant altering the illustration. For example, the figure closest to the ground on the Tower is usually depicted as falling on the rear part of the Tower, and thus hidden. There is a tradition which mentions that this figure is really falling out of a partially open but out of view door. In the deck, they have placed this door in view, thereby altering the rendition, and removing the ambiguity as to whether the person is falling down the side of the building, or from its (rear) door.

In other places, they could have added clarity but unfortunately didn't. For example, in a Schaffhouse 18th century deck (also published as Tarot Classic by US Games), the curved swords are clearly swords, with their hilts not confused with the tip of adjacent blades. It should be noted that this deck has many significant differences to Marseilles style decks - as one example, the Hanged Man's two legs are straight.

As mentioned above, and as in most early French decks, the Swords are curved and crossed when even-numbered. If odd-numbered, the pairs are crossed and a single straight sword is placed pointing upwards in the middle. The Staffs or Batons as straight. In a reading, they are thus easily differentiated.

As with all early Tarot decks (with the exception of the Sola-Busca, which does not follow Tarot tradition in either its Major or minor Arcana depictions), all pip cards are ornate, but no scenes are depicted. The suits follow the more common Tarot tradition of Coins, Staffs/Clubs, Cups and Swords, rather than the related but less popular Diamonds, Clubs, Hearts and Spades. The ten-of-cups card, therefore, is illustrated ornately with ten cups.

Some early decks, such as the Visconti-Sforza, kept their Major Arcana cards un-numbered. Most others, as with all the very early numbered Tarot decks, numbered the Major Arcana using the Roman additive style (there is thus no zero, and nine is written as VIIII). Also, and following traditional numbering, Justice is VIII (eight) and Strength XI (eleven).

As with the other available Marseilles decks, this deck is a must for those interested in symbols of perennial mediaeval esoteric representations. For those who wish to use it as a tool for developing the Imaginative faculty, then this is, in my opinion, by far the best Marseilles style deck, and hence best Tarot deck, yet available. It is certainly worth adding to any serious Tarot enthusiast's collection.

I would personally rate this deck, for its artistic merit, traditional integrity, and esoteric symbolism (even in the minutia of detail), a definite five star!