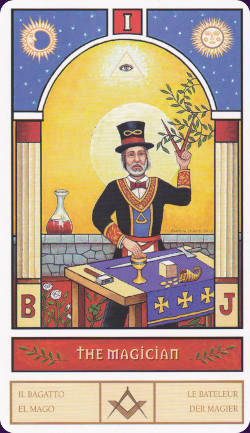 The Masonic Tarot is an attractive 78 card deck inspired by the symbolism of the Freemasons. The major arcana have themed tarot scenes, while the minor arcana are simple, unillustrated pip cards.


Card Images from the Masonic Tarot 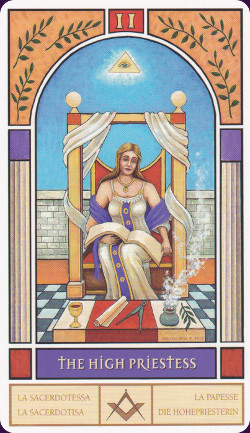 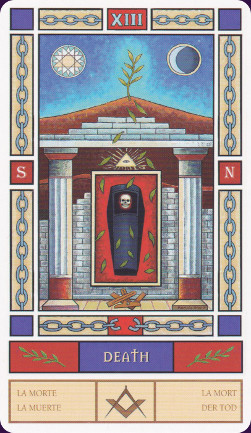 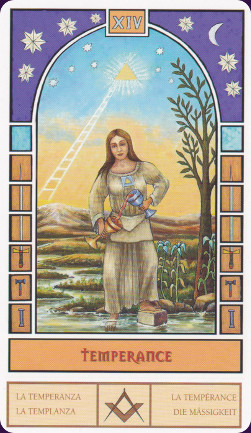 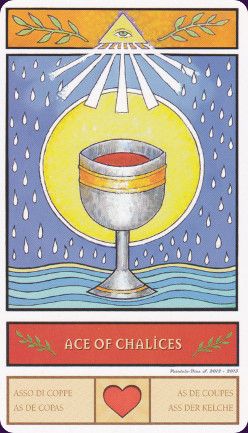 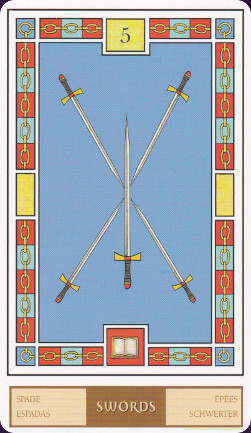 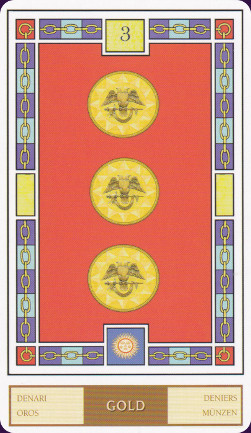 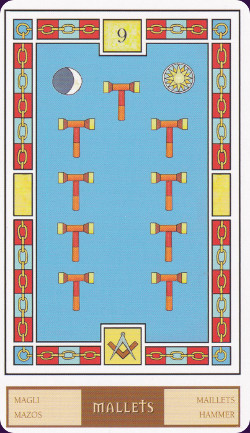 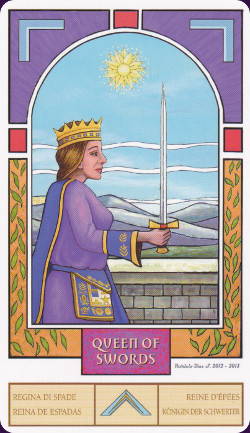 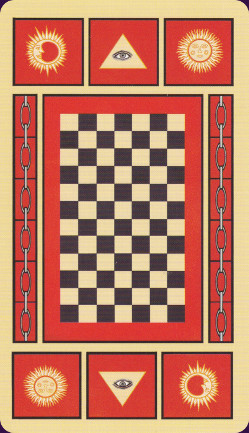 The Masons are a fraternal group made up of masonic groups such as stonemasons, carpenters etc. They originated in the early 14th century and probably formalised and organised in the late 17th and early 18th century. Self-described as a "beautiful system of morality, veiled in allegory and illustrated by symbols". They use three degrees of initiation characterised by ritual and revelation of the deeper meanings of (Masonic) Lodge symbols, which are used to build an allegorical Temple of Solomon.

The founders of the Golden Dawn – Woodman, Westcott, and MacGregor Mathers - were all Masons so it is not surprising that the Golden Dawn hierarchy and initiation rituals were similar to Masonic lodges. Aleister Crowley claimed to be a Mason, he certainly ordered some of the OTO to resemble the hierarchy and structure of Freemasonry. And of course A. E. Waite was a Freemason.

This is a 78 card tarot deck, with 22 Major Arcana cards and 56 Minor Arcana cards. The suits are Mallets/Wands/Earth, Chalice/Cups/Water, Gold/Pentacles/Fire, and Sword/Swords/Air – and feature 10 number cards as well as a Knave, Knight, Queen, and King. The Major Arcana is fully illustrated but the Minor Arcana are pip cards, with only the Court cards being illustrated.

The illustrations for the Major Arcana are deceptively simple and appear almost sparse, however the frames around the images are all individual and contain a plethora of symbols and cues. The Minor Arcana have colour-coded frames, but the illustrations themselves are cut and paste compositions featuring the unimaginative repetition of a single image representing each suit.

The cards measure 70 x 120 mm which makes them a standard sized deck for Lo Scarabeo (the publisher). The card stock is, unsurprisingly, excellent - smooth, flexible with a high gloss finish. The deck has a nice weight to it, and shuffles extremely well. The print quality is superb with the illustrations being reproduced with clarity. There are no blurred images, no misprints,no colour bleeds.

The artwork is unusual, best described as studied amateurishness – a combination of naive art and contrived rusticity. Strong geometric lines and shapes are offset by soft colours; and figures that are stiffly posed are delicate in their facial expressions. The colour schemes too are a study in contrasts – bold, harsh reds and blues are moderated by lovely pastels. The print on the back features Masonic symbols in red, black, and yellow, and is a reversible design.

The cards and guidebook come packaged in a solid cardboard upright box, with liftoff lid. The box has a glossy finish and is printed with Masonic symbols as well as images from the deck. It is compact, which means it is easy to stash in a bag or backpack, and is tough enough to withstand the rigours of travel without damage.

The guidebook features instructions in English, Italian, Spanish, French, German, and Russian. It has 64 pages of vital information (in English). The Major Arcana is covered in considerable depth – with discussions about the character and purpose of the archetype depicted on the card, and what they may represent in a reading. There is a clear description of all the symbols in each image, and what they mean. Each card is given a ‘Arcane Classification’– they fall into one of the following categories: male or female, day or night, positive or negative, active or passive. The classifications are based on the ’energy or value’ that each card represents. The cards are also given an Element Classification and a ‘Vital Projection’ which is the motivating force behind each card.

The Court cards represent ideas more so than people, and the divinatory meanings given for the Minor Arcana focus on work and working relationships. The deck, on the whole, focuses on work, production, business partnerships, community, and material prosperity.

If you are interested in the symbols of Freemasonry then this deck is an interesting place to start. It brings into focus how these symbols have influenced and shaped a whole path of modern tarot illustration. In some respects these are not particularly subtle cards – virtually every person is depicted with a Masonic apron with their symbols of office also starkly highlighted. However the artist makes every element of his illustrations significant, every detail counts. It is quite a disappointment then, that this is not a fully illustrated deck – as it would have been fascinating to see the influence of Masonic symbolism on the Minor Arcana too.