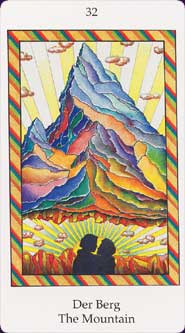 The Master Tarot is a 78 card non-traditional deck displaying episodes of Jesus Christ's life and personalities who were important to his story. The art is the creation of Amerigo Folchi, artist of the Tarocco Storico della Citta Di Ferrara.


Card Images from the Master Tarot 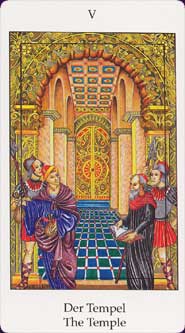 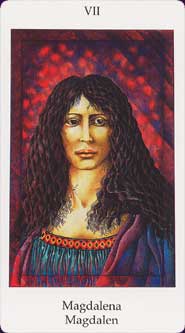 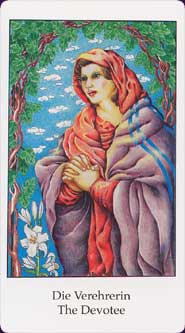 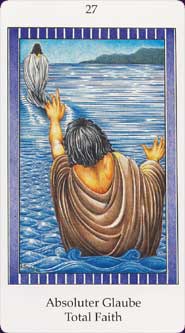 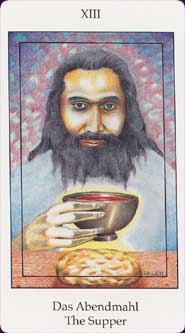 This deck is illustrated by well-known tarot artist Amerigo Folchi. Human figures, animals, and buildings and landscapes are all competently executed and rendered in bright, cheerful colors. Some of the images look like they could appear in a children’s illustrated Bible storybook; others resemble stained glass windows.

Two or three cards contain mildly rendered male and female nudity. There is no blood or physical violence depicted (just a hand brandishing a whip at a building), and there are no drawings of the European-style “Devil.” Jesus’ crucifixion is suggested only metaphorically (and quite cleverly, at that), with a stylized image of a shrieking person modeled on the famous “Scream” painting. In all, it is a very good-natured, positive, and—in some cards featuring rays of divine light—self-consciously “spiritual” set of images.

Many of the human figures in the deck are drawn with western European phenotypes and, in some cases, clothing and architectural backdrops (e.g. Lady of Sin shows a curvaceous red-haired, light-skinned woman in a filmy Western-style gown, against a Western-style brick building). However, there is a sprinkling of ethnic diversity—most notably in a few portraits of Jesus and Barabbas that are drawn a bit closer to the Middle Eastern origins of the men than is commonly found in Western religious art. There are also a few figures (disciples, onlookers, etc.) drawn to suggest equatorial African ancestry, East Asian ancestry, and indigenous South American origins and dress.

The art does not confine itself to one era or region; while some cards feature people in the dress of first-century Palestine, others depict blue jeans, Superman costumes, television sets, and Renaissance-era European churches.

The stories, archetypes and concepts of this deck center closely on the person, life events and teachings of Jesus Christ. As such, a narrow slice of the Christian Bible is the source for the Biblical material—the four Gospels, of course, plus a few other New Testament books.

Interestingly, Montano also bases many other cards on passages found in non-canonical (i.e. extra-Biblical) historical manuscripts such as the Gospel of Mary, the Arab Sayings of Jesus, the Gospel of Thomas, and the Acts of John. Most Christian denominations do not accept non-canonical works as part of Christian doctrine; some of these texts are even viewed as heretical. However, as Montano alerts us in the LWB introduction, the deck creators are *not* Christian and their focus is not on Christianity but on Jesus Christ; it makes sense, therefore, that they might cite sources rejected by the Christian establishment.

An example of a Major Card is Forgiving (XI). The image is of a dazed woman in a low-cut dress lying in the sand as an angry mob approaches her from behind, throwing stones. She looks up in awe at a hand (presumably Jesus’) that is stretched out above her. The LWB lists the associated Bible verse from the Gospel of John: “He that is without sin among you, let him first cast a stone at her.” As it does for each of the cards, the LWB goes on to offer a few paragraphs of reflections (“With my sins exposed, who am I to condemn? But the beauty is that, by forgiving another, I myself am forgiven.”) Examples of Minor Cards include The Children (“suffer the little children to come unto me”); Love Your Enemy; and The Wolves (“beware of false prophets who come to you as wolves in sheep’s clothing”).

Examples of People Cards include The Man of Power (i.e. Pontius Pilate); Barabbas (the criminal); The Moralist (a general Pharisee-type figure); and The Neighbour (adapted from the Good Samaritan parable).

Because the cards draw from a deep well of history, Christian scripture and doctrine, and archetypal Biblical figures, the deck is very well-suited to one-card draws. Indeed, one card can keep you occupied for hours if you so desire: you can first look up the card in the included Little White Book (LWB), then pick up a copy of the New Testament or the non-canonical texts to reference the associated passage or story, and then even consult any of the thousands of books or articles of Christian doctrine and Biblical scholarship.

I consider the LWB to be indispensible and recommend that most users should, at the least, consult it the first time a certain card is drawn. You will rarely hear me instruct people to reference a LWB, much less describe one as “indispensible;” however, in my opinion, the non-traditional structure and meanings of this deck call for a greater-than-normal reliance on the LWB.

The good news is that this particular LWB is longer and more coherently written than most, with 2-3 paragraph descriptions and reflections for each card and a line of scripture (citing the corresponding book of the Bible or non-canonical text) offered for many of them. Most cards also include a few meditative questions or prompts one can ask oneself. The bad news for non-Anglophone tarotists is that the LWB of the deck I purchased is entirely in English.

I believe this deck will resonate especially well with people who have practiced or studied a form of Christianity at some point in their lives. That includes people like me, who were once deeply ensconced within an orthodox Christian tradition (any denomination); who may or may not now regard traditional Church doctrine, hierarchy and politics with a critical eye; and who retain a deep admiration and warmth for the person and teachings of Jesus Christ.

Some tarotists may hope to ease devout family and friends into a tarot-receptive state through the use of a deck like this. Personally, my own ultra-fundamentalist, evangelical Protestant family would not be receptive even to this Jesus-centric deck (in fact, the above-mentioned non-canonical influences on the deck would alarm them even more than a Rider Waite Smith Devil card would!).

If, however, you do plan to use this deck to “gently” introduce similarly devout friends and family to tarot, you might consider removing the LWB from the box first; it contains numerous endorsements of ideas that are a big “No-No” in both mainstream and fundamentalist Christian traditions. For instance, the author disclaims any adherence to Christianity and describes Jesus as only one of many spiritual “Masters” including Krishna and the Buddha. Also, the LWB references the non-canonical works mentioned above as well as the Foundation for Inner Peace’s “A Course in Miracles,” a 20th century spiritual treatise that is notorious (and vehemently decried) in many Christian communities.

Finally, what about tarotists who either hail from a completely different religious background, or who grew up in a nominally Christian environment but are unfamiliar with specific parables, verses and concepts in Christian doctrine? Can they use this deck comfortably? Yes, however, I predict that they will benefit from a fair amount of LWB and textual referencing— more than a person familiar with the New Testament would require.

Certainly, there are readers who rely 100% on “intuition” drawn from the tarot card images; such readers may approach the deck purely on its visual merits, and find that it makes a good oracle in that fashion. However, if you prefer cards to have a general assigned meaning, you will get more out of, say, The Whip card, if you look up the card in the LWB; discover that it depicts a scene of Jesus’ anger at the pious priests and fundamentalists of his day; and then look up the related Biblical passage in a Christian Bible or on the internet.

The card will then become much more than just a disembodied hand wielding a whip outside a large building, and will instead encompass for the reader the full range of emotion and circumstance embodied in the Gospel story: righteous wrath and its difference from plain old anger (or is there no difference in some cases?); the folly of excessively hierarchical and over-pious members of the “establishment;” the need for us to stand up to the powerful “in-crowd,” and so forth.