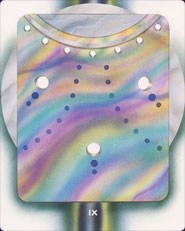 The Mayan Oracle: Return Path to the Stars is a set of 40 cards inspired by the teachings and symbolism of the Mayan civilisation. The cards are very spiritual and New Age in concept and encourage the evolution of a higher consciousness through their use in meditation.


Card Images from the Mayan Oracle 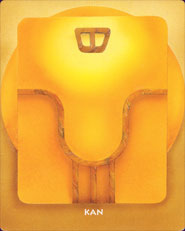 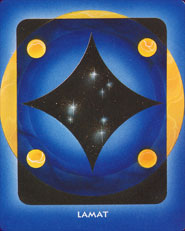 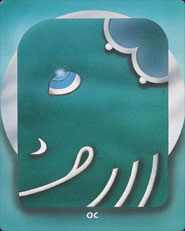 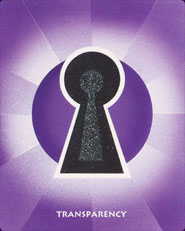 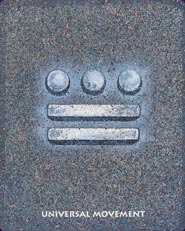 The Mayan Oracle is a 44-card deck designed for spiritual growth, self-transformation and help forming a sacred relationship with the Inner Self. The cards were inspired by the Mayans - a Central American civilisation that was at its height between 200BC and 1000AD and renowned for its gifted mathematicians and astronomical observations - and is a visionary and New Age deck built on top of its Mayan foundation.

The conceptual creators of the Mayan Oracle are Ariel Spilsbury and Michael Bryner, with help from Donna Kiddie on the artistic side. Michael has an interest in Mayan esotericism, shamanism, and is a holistic therapist and spiritual counselor and teacher. Ariel is a spiritual counselor and New Age workshop facilitator. As you might expect, there is also a very spiritual and synchronistic basis to their deck. The symbols in it came to the creators in dreams and vision, and they found they resonated with the Mayan archetypes. Michael first created the star glyphs representing the 20 Mayan archetypes to ‘seed’ the project. The rest of the cards were developed by the Circle of Zuvuya group through prayer, meditation and study of the Maya’s wisdom. The synchronicity of its creation continued when Ariel met a contact from Bear & Co, their desired publishers for the deck and book set, during a workshop in the Yucatan.

The Mayan Oracle has a total of 44 cards: 20 Mayan Star Glyphs, 13 number cards, and 11 “lenses of mystery”. The 20 glyphs and 13 numbers form the “Tzolkin” of the Mayan calendar, which the authors believe is a “galactic code of the workings of the universe”. The Star Glyph cards do not show constellations, but are geometric symbols, lines, and abstract pictures from which the mind can see several things in the design. Most of the cards are blacks, browns or monochromatic with a few like the Ix, Cib, Caban, Etznab and Ahau standing out in bright colours or gold and silver foil. The number cards have a background of small black and white dots, like a static pattern on a television, and the Mayan numeral is centered on the card. The ‘lens of mystery’ cards have basic geometric symbols in white and purple. For example, the Shadow card shows a circle that is half dark, half light; Realm Shift displays a white pentagram on a purple pentagon; the Transformer card has a lightning bold on a circle.

The backs of the cards are indigo with an interlocking circular design which has the sun in the circle and stars visible through the circles. The cards themselves are rather matte in feel, and have badly cut corners that are rather burred and uneven.

The cards are packaged with a hefty 314-page companion book. It is worded in a very channeling and psychic style talking of light beings, the need to align the heart to pure love, and the quest to help with the transformational shift on Earth as indicated by our nearing of the end of the 26,000 year cycle in the Mayan calendar. The book provides spreads, insight games to play, and plenty of supporting information in New Age style (though little information on the Mayans themselves) for the cards.

The Star Glyphs are covered in extensive detail in the book. The numerous associations from colour to herb to common Mayan usage to mudra to affirmations are described, and meanings are presented in two styles: poetry and more conventionally structured spiritual advice and guidance. Part III of the book is also devoted to the Star Glyphs and offers a deeper look at the archetypes and explains some of the choices of colour and symbolism. The numbers and the ‘lens’ cards have less supporting information than the glyph cards, and are explained similarly through affirmations, qualities (keywords), spiritual meanings and insights.

The Mayan Oracle is for spiritual growth, transformational work, and for raising consciousness to a higher dimension. It is emphatically not intended for fortunetelling or problem-solving, and its simplistic artwork and New Age style might not be everyone’s cup of tea. It is instead a meditational device designed to stimulate the intuition and help you become more spontaneous, open, playful, loving and trusting.