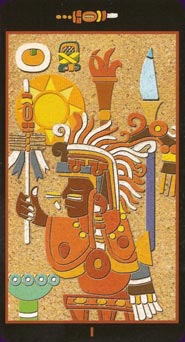 The Mayan Tarot is inspired by the pre-Columbian, Central American culture of the Mayas. The colourful majors have the familiar cartoonish look of Mayan art, while the minors show a small rock etching-like illustration and large suit symbols.


Card Images from the Mayan Tarot 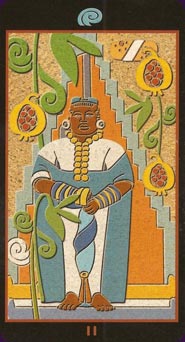 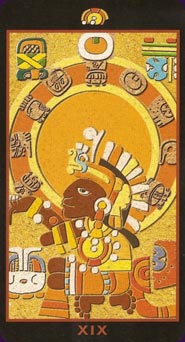 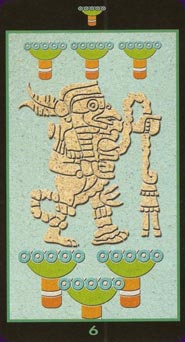 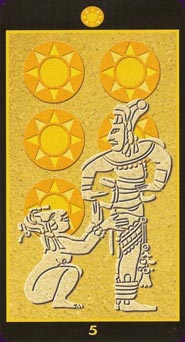 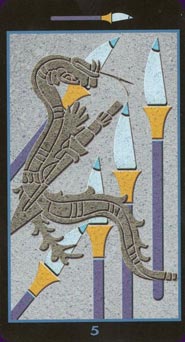 As 2012 approaches, there is an increasing public interest in the lost civilisation of the Maya. Lo Scarabeo have recognised this and created the Mayan Tarot.

The artwork in Lo Scarabeo’s deck is faithful to the rough, cartoonish images that characterise Mayan art, and within the majors there are some aesthetically pleasing images – for example a meditative magician holding a ceremonial wand while symbols of the suits of Swords (Lances), Wands (Torches), Pentacles (Suns) and Chalices (Terracotta Plates) hover in the air around him. Many of the majors are cartoon/Mayan versions of the usual characters, including the usual objects – the Hermit with a lantern, the woman and the lion on Strength.

Throughout the deck the background has the texture of pitted stone, giving the images an ancient feel. Perhaps the Mayan letters, symbols and glyphs that hover around the protagonists within the major arcana are relevant to the cards on which they appear, revealing in a quiet, mystical way something deeper than we can comprehend. On the other hand, maybe they are simply randomly chosen from existing Mayan codexes simply to give the images an authentic Mayan flavour, or maybe they’re simply born from the imagination of the artist. In the end it doesn’t matter – if you love Mayan art then you may be satisfied with the major arcana in this deck. In which case, as I’ve noted before about Lo Scarabeo’s Contemplative Tarot, would it not have been better to simply publish the majors as one of their (sadly) now out-of-print, outsize ‘Tarot d’Arte’ series? I ask this because the minor arcana have completely failed to satisfy.

What is irritating is the total lack of connection between what you read in the LWB and what you see on the corresponding card. There is no connection whatsoever in most cases, except on a handful of the images if you really stretch your imagination. For example, within the suit of Suns (Pentacles), for the 2 the LWB says ‘Strange peoples come from the sea. The true enemy is indecision, in both trade and fear’. And what is on the card? Simply a Mayan in headdress holding a disc. For the 3 the LWB says ‘The red dragon stores energy, keeps it, and then shares it by spreading it around the world’. What’s on the card? A red dragon? No. A Mayan standing behind another Mayan, touching him on the bum. On the 5 the LWB says ‘With perseverance the ants save and accumulate enough food to overcome famine. So all waste is avoided.’ What’s on the card? A naked female Mayan kneeling behind a male Mayan whose legs appear to be bound together. She touches him on the bum. Within the suit of Terracotta Plates (Chalices), for the 6 the LWB says ‘Cherish the memory of your lover’s erotic embrace and continue to fan the fires of passion’. The image? A ‘bird-man’ holding what could be rope. Within the suit of Lances (Swords) I found what with a stretch of the imagination could be a suitable image for the given text, in the 5 where the LWB says ‘He who fails to honour higher beings deserves punishment and dishonour, and will suffer dire remorse’. The image shows a serpent pierced by an arrow.

The minors are also far less interesting to look at, as they lack the familiar Mayan symbols/glyphs that the majors have - serpents, letters from the Codexes, etc. They also lack the variety of colour - apart from the symbols of the suits, the pip cards' images are simply rendered in black and beige. However, the images on the court cards are brightly coloured Mayans in ceremonial clothes and headdress, and are not titled, simply being numbered 11-14.

I’m truly grateful to Lo Scarabeo for keeping my love of the tarot (mostly) satisfied for the last 20 years, but I really I can’t highly recommend this deck. I do wish they’d think more carefully about what they’re putting out there, as in my opinion around 25% of their decks bear images that have little connection to the tarot’s generally accepted meanings (usually, as is the case here, within the minor arcana).

If you’d like to see how Lo Scarabeo have successfully used Mayan history and imagery elsewhere, buy their Dragons Tarot. The Mayans occupy the Pentacles of this extraordinarily excellent deck. In both the minor and major arcana of this deck, all the images are clearly relevant to the cards’ traditional interpretations – Lo Scarabeo hit a home-run with this one.

If you want an entire Mayan deck, have a look at Peter Balin’s Xultun Maya Tarot. Sure, its minor arcana are simply familiar images from the Waite-Smith wearing Mayan ceremonial dress, but so what? Many of the cultural decks on the market peddle the Waite-Smith images so what’s new. At least Peter Balin’s beautiful major arcana offer something new – a new take on familiar images, and the curious bonus that, when the cards are laid out next to each other in the shape of a pyramid, they form a complete picture.