The artist draws on the energies of Mother Earth in the Native American fashion, using pastel, positive looking artwork to create a feeling of harmony, reverance, and wonder in the Medicine Woman Tarot. 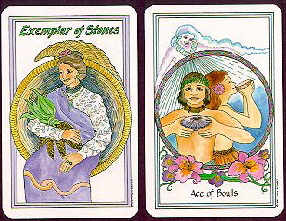 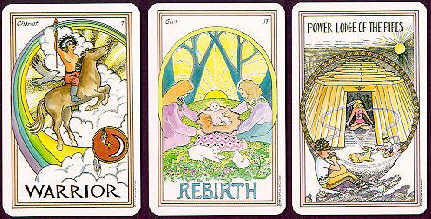 I acquired this deck mostly by chance and certainly not through planning, when I came across a post on the Aeclectic Tarot forums offering to trade it for another deck. I decided to check it out, and fell in love with it instantly! Within two weeks, I was cradling it in my arms and praising the day I responded to that post!

This deck, created by Carol Bridges, is another treasure. The artwork on its own is gorgeous, being simple enough to appeal and be open, but still being detailed enough to convey meaning in an evocative and very inventive way. Every single thing in the cards seems to have meaning of some sort: Even the way the titles of the Major Arcana are written!

To give a brief background to this deck before I got into details however, I shall say that its purpose, other than to be a deck for people to read with, is to help people, both men and women, regain the feminine healing energy that many people in the West are brought up to neglect nowadays. The creator takes pains to reassue that this deck is not specifically aimed at women only, despite its name, which came about due to the idea of the feminine healing energies that we are trying to reclaim. As Carol says:

"I feel that the division of humans into two sexes is arbitrary. We exist in a spectrum of sexuality and body types... A Medicine Woman is any person who has recognised and actualised their female powers, acting with intuition, love, and creative force to make this world 'home' for all generations to come."

This deck has the traditional 78 cards, and the ordering of the Majors is traditional aswell. However, Bridges has renamed each Major, and the new titles of these Majors are written in what I was taught was called 'Bubble Writing', in a way that fits the meaning of the card. For instance, the new title of the Hermit, 'Guide', is written as though it were a 'Guide' shaped book. The traditional titles of each Major are to be found on the cards themselevs though, in small black writing in an unobtrusive place, which helps a lot for beginners who are trying to work out the correlations between this deck and the more traditional decks. The images on the cards, whilst not being traditional, are easy to interpret and read, and the meanings are mostly traditional anyway.

The Minor Arcana are one of the strengths of this deck: Each suit tells the story of its 'main character', for instance, the suit of Stones (Pentacles) tells the story of how a young woman sets up her own small jewellery 'business' from scratch. The suit names have been changed, but are still recognisable: Bowls for Cups, Arrows for Swords, Pipes for Wands, and Stones for Pentacles.

The Court Cards have been changed quite dramatically however, with the traditional King, Queen, Knight, Page becoming Exempler, Lodge, Totem, and Apprentice. In all of the suits, the Apprentice is represented by the 'main character' of the suit's story, as they began their journey, and the Exempler is represented by that same character when they are older, and have the benefit of their experience. The Totem bears the image of an animal which represents that suit, eg- Eagle for Pipes. The Lodge, which bears a correlation between the womb of the Queen, usually holds resources used in the 'story', or shows the harvest which came from the 'story'. This is a wonderfully insightful way to view the Court cards, and I found it very easy to read the cards in this way. However, it could prove difficult if one wanted to use Significators, as often these Court cards do not represent people or personality traits, but situations and consequences.

It becomes apparant after sifting through this deck a couple of times that the images a figures within them are primarily female, and indeed three of the four suits have women as their 'main characters'. However, this should not be misinterpreted as feminist overtones: As mentioned above, this deck is aimed at both men and women, and includes both men and women in its purpose. The images also show tribal settings, but this is not based around a specific tribal culture: Something that surprised me when I received the deck, as I was expecting it to focus on the Native American culture. This deck has focussed largely on what the creator calls "tribes of the future", where humanity has blended what can be learned from the past cultures. It shows some tribal scenes which are quite modern: the people in it are wearing modern clothes for instance, and some which are not modern, where perhaps the character is a Shaman, kneeling in his circle with his tools in front of him. It is certainly a refreshing and interesting blend, and one which distinguishes this deck from most others of the same theme.

Overall, this deck is easy to use once it has been explored, and has artwork which I personally find very open, honest, and attractive. The new titles for the Majors offers the reader of this deck a whole new way of looking at the cards, and the stories played out within the Minors are a beautiful way to craft their meanings. A beautiful deck, and one which I'm sure many will benefit from.

First and foremost the intricate details on these cards cannot be seen so please don't dismiss them from first glance.

These cards read like a dream, the energy just flows through them and the readings that I have given from using these cards are extremely detailed and spiritual. I find the beauty of the art as well as the colours used allows my intuition to float to a higher level than I reach with many other decks. Animal spirits are lightly drawn in the background and become almost real during the reading. The gentleness of the lines in the artwork is wonderful to look at when reading with these cards.

I love the way that Carol Bridges adds the "usual" names of the major arcana on the side of the cards since she has changed the names of the majors, it makes it much easier to understand the majors and see her parallels between the traditional meanings and that of the great spirit, mother creator. These cards speak of indian beliefs, caring for the earth and each other. Using our intuition to see the paths before us, and the nurturing ways of the mother.

I love using these cards and my clients love to look at them as i am reading for them. The images are not scary or negative looking so i find that my clients are more relaxed during their readings. For example, the "devil" card in the traditional tarot is the "trickster" in this deck. The suits are stones/pentacles, pipes/wands, arrows/swords. And bowls/cups. Every card in this deck has a circle on it, in my opinion, representing the circle of life.

I recommend this deck to anyone that is interested in the beliefs and ways of the Native American Indians and enjoys a simple, yet detailed deck. The cards are blessed with wonderful energy. I give them 4.5 stars.

I acquired my deck much by accident, while attending an estate sale. The woman was eclectic and worldly...and the deck was just sitting there waiting to be bought! My oldest daughter was the one to initially find it and brought it to me, saying I needed to buy it and teach her with it. I feel that the Goddess, in all her infinite wisdom, guided her to it.

When we got it home, I laid each card out and gazed at the wonderful artwork and poured over the book. I love the detailing in the photos, simple yet empowering all the same. My 8 year old loves to look at the cards! With the deck’s guidance and teaching, she picked out her very first Tarot Deck of her own. The guidebook that comes with the deck goes into great detail and depth to help the reader understand the spiritual meanings behind each scene. Whenever I use it, I feel very comfortable and relaxed.

Each card shows scenes, which in my opinion, are more closely related to everyday life and easier to understand than some of the more fantasy-like decks. Carol gives very personal and detailed explanations for what each card represents. When I read from this deck, I feel a strong surge of feminine and masculine influence with each card. While the imagery is predominantly feminine, the duality of each card is strong. Each card has a calming feeling, nothing is too dark or sinister. I feel very comfortable in using this deck to teach my oldest daughter the ways of the Tarot. Another quality I love about this deck is the size. I have used a couple of decks before and this one is a comfortable size to use, great for small or large hands alike to handle. The layouts are also wonderful and easy to use. Each position is explained in thorough detail, and does a great job of relating the reader to their significance.

I believe that many people would feel extremely comfortable using this deck or getting a reading from it. I plan on keeping my fortunate find and using it daily for many years to come!