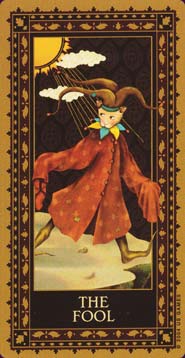 The Medieval Cat Tarot is an elegant deck of aristocratic felines in Renaissance dress and style. The 78 cards have traditional roots but have been updated and simplified in symbolism, making it suitable for beginners and the more experienced reader. 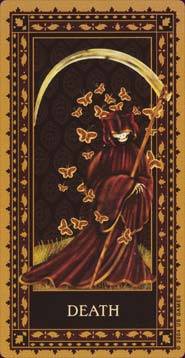 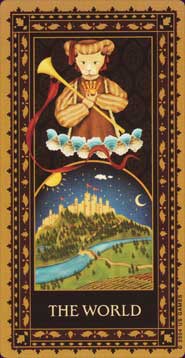 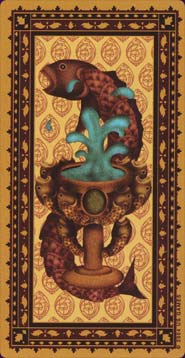 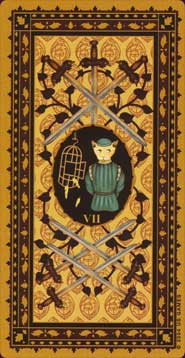 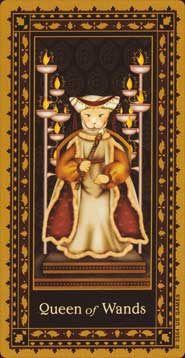 I was pleasantly surprised when I opened the box and began to examine the cards. They are glossy, smooth and very polished in appearance; a little longer and thinner than usual cards but very easy to handle and with a nice feel. The cards were inspired by fifteenth century art, and have the look of the historical Visconti-Sforza. The very consistent artistic style was created by Lawrence Teng, who also worked together with Gina M. Pace (Wicce) to complete the companion text.

The major arcana cards feature stately cats with bodies in human poses, their head and feet cat-like in shape but palely human in colouring. The symbology has a traditional foundation, but has been stripped down and reduced of clutter.

The minor arcana take a new direction and combine modern and standard styles. They appear to be traditional looking pip cards in the background, but in the centre have a kind of porthole. Here, a RWS-style scene has been condensed down its essentials and shows a medieval cat participating in the activity or feeling of the card. Some scenes have been altered to be more immediately clear and aren’t a complete RWS clone, but they somehow seem truer to the meaning. The best card of these cards in my opinion is the Seven of Swords – a blue-dressed cat stands next to an empty and rocking bird cage, empty of its canary but drifting feathers. Others worth mentioning are the Four of Pentacles, a portly cat holding a ring of keys in front of a heavily padlocked door; the Eight of Wands, where a cat stands poised with a note on the end of an arrow, poised to fly, to name but two.

The major cards have standard Rider-Waite style titles, but are without numbering to avoid the Strength/Justice conundrum. Of note is the Empress, who has the significant addition of children, and she stands in a very Hierophant-like pose with her hands on their hands (though it appears somewhat more caring). The Devil is a fox-like creature, expensively dressed and hiding behind a cat-shaped mask. I particularly like Death, showing as it does a robed Death figure who has a feline skull and jaw. All of the feline figures are elegant and well-dressed, and no strong emotion passes their face. They are rarely kitschy and never cute -- above all they are dignified, as a cat should be.

The court cards are titled traditionally, but in imagery are a departure from the traditional. They have been changed to more clearly differentiate between each other, with the element develops from the Pages through to the Kings. Each court figure is dressed in a different period costume, and interacts with their element in a different way.

The booklet is small and staple bound, but includes a satisfying amount of information and meaning for each card in English. The card backs have an almost reversible (they are reversible at a distance) design, though they are intended to be read upright.

The Medieval Cat Tarot is simple and clear enough to be an easily readable for the beginner and intermediate reader, while at the same time it is an original and polished deck with links to Tarot’s history and European tradition. A deck for the cat lover, the lover of the Renaissance era, and most especially for the Tarot reader.