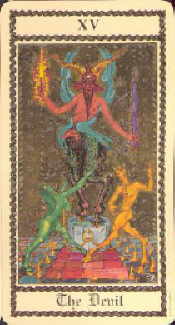 The cards of the Medieval Scapini Tarot, by Luigi Scapini, are in the European Tarot style. It's a wonderful deck with a very authentic Middle Ages feel and look to the card artwork. 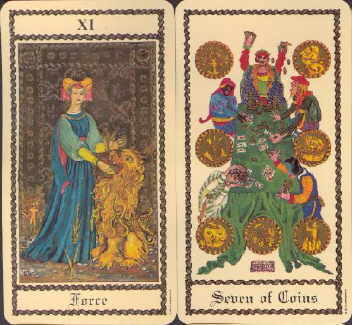 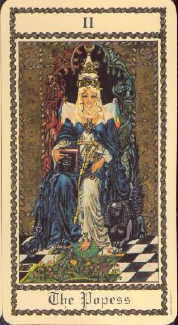 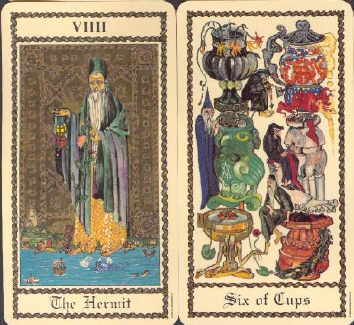 After recreating the missing cards from the 15th century Tarocchi decks to form the U.S. Games' reproduction of the Visconti-Sforza Tarot, Luigi Scapini was apparently inspired to create his own version of the Tarot in a similar genre.

The resulting Medieval Scapini Tarot appears to be a very interesting blend of 15th century imagery and contemporary artwork. The dark, gold-and-bronze colors and realistic representations of the Visconti Sforza Tarot appear to juxtapose in stark, yet pleasant, contrast with the vivid colors and near-caricature additions of the artist.

It is interesting to note that Scapini admits that, while painting the images for this deck, he had no knowledge of the "standard" interpretations of the individual cards. As such, a person who reads within a given system (such as the Rider-Waite-Smith), he or she is likely to have some initial difficulty in maintaining those interpretations with the symbols of this deck.

Nonetheless, Scapini manages to maintain a degree of consistency throughout the deck and, with a little patience, such divergence seems to be easily overcome. Indeed, the fact that symbolic artwork is present anywhere within the Minor Arcana may be deemed a considerable improvement over the inspiring Visconti-Sforza cards.

Printed on strong, plastic coated board, these cards are somewhat longer than many decks, which make it slightly harder to shuffle. However, when considered in contrast with the very large and difficult to handle Visconti-Sforza deck, the Scapini Tarot again stands in a place of considerable advantage.

The accompanying LWB is, for this deck, indispensable. Once the historic and artistic inspirations of these cards are understood, they then become infinitely easier for the new reader to utilize. Interesting details (such as the artist’s cameo appearance as, among other things, a severed head in the Death card) yield considerable insights that will aid the reader in interpreting this unique deck. In all, it is well-written and provides the artist’s version of each card’s meanings as well as a brief description of the Celtic Cross spread.

In sum, the Medieval Scapini Tarot is a fascinating deck that will stretch the interpretive repertoire of any reader. Based on a historic Tarot, these cards are ideal for someone who desires the feel of antiquity combined with modern utility.

A beautifully printed deck, in the traditionally long shaped cards which would have likely been used in the medieval period. Lavish detail in all the cards, beautifully finished, and smooth to handle. Very emotional cards, the mood of them is like a slipping dream, the style of art is neither ultra realistic, or comical, or symbolic, its more like a mix of all. It clearly embodies the artist's own interpretation, it feels like his mind that we travel through, the cards are the medium to our own psyche whilst the ride is like a journey through his (Scapini's) mind.

In a previous review of the deck, the author mentioned that there was no book with the deck. That is true, but you get a mini-booklet inside the deck, which is great help to any beginner in Tarot, with meaningful step-by-step instruction on how to read the cards, and a full analysis of what each card could mean, and it provides background on the cards. A lot of the cards have meaningful symbolism of the artist, ie. a picture of his wife and child, self-portrait etc.

This deck suits people who are really inspired by art, and the renaissance, and a traditional style of deck, while the actual imagery is more cryptic and self-styled, while still feeling medieval.

A word of caution: As I mentioned, the cards are very slippery so work in a area where you have a clear open space and will not likely let the cards slip into some narrow space (which nearly happened just then! :) ).

Other than that, all i have to say is that it is a great deck, and something you will treasure for years to come!

The Medieval Scapini deck is a stunning visual feast.  It is one of the most beautifully illustrated decks I have ever seen.

Luigi Scapini has embellished the entire deck with lavish detail - both the Major and Minor Arcana cards are equally adorned and fascinating to look at.  Every card is a bibelot, a little masterpiece rich in eclectic imagery, making them ideal for both divination and meditation.

The cards transport you to the Middle Ages of Europe through both costume and settings and you find yourself submerged in the atmosphere of medieval/Renaissance times.  Many of the cards depict historical figures eg.  Rasputin the Mad Monk of Russia represents the Knight of Cups, the 6 of Swords depicts St. Paul's moment of revelation on the Road to Damascus, and the murderers of Julis Caesar display bloody daggers on the 10 of Swords!  I loved the paintings of the Mona Lisa which formed the carpet under the King of Pentacles throne!  Scapini has also drawn inspiration from modern life - the flushed fanatic speaker haranguing a crowd from a podiumin in the 7 of Wands was inspired from daily scenes in Hyde Park, London.

All the cards depict universal situations revealing the dilemmas, problems, joys and sorrows of daily life in both city and country landscapes.

Many clues are embedded in the intricate designs, and careful examination is needed to discern all of them.  Taking the time to study each card is well worthwhile, as you are rewarded by delightful touches of humour as well as evocative and inspirational food for thought.

I found it a fabulous deck.The only negative comment I can make is that unfortunately there is no book to accompany the Medieval Scapini tarot.  Because it is so rich with symbolism and detail, I feel that a book giving indepth background to each card would be invaluable.  There is  a small tract written by Luigi Scapini enclosed in the box of cards, giving brief explanations in point forms, but this left me yearning for more.