The Melissa Lenormand is a 36-card oracle deck. It's inspired by vintage ephemera, postcards and advertising, giving it an antique feel and more complex imagery than is usual for a Lenormand deck. The deck is now completed, and available in a self-published edition.


Card Images from the Melissa Lenormand 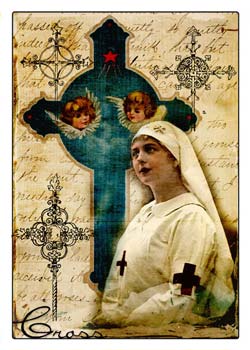 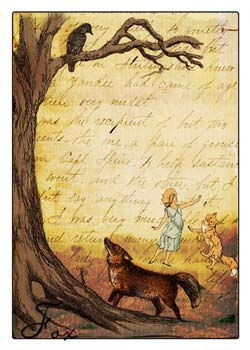 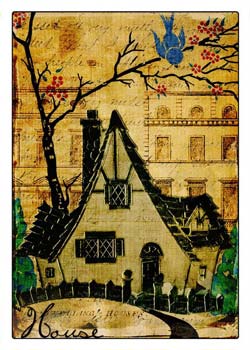 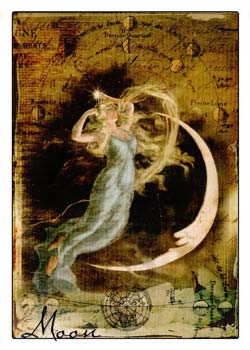 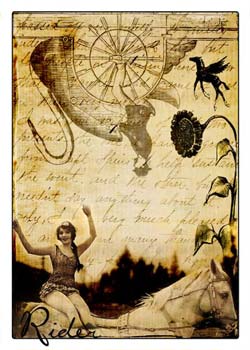 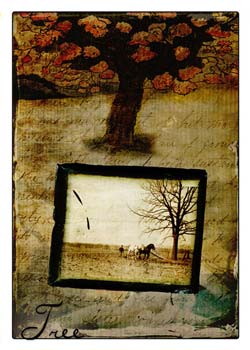 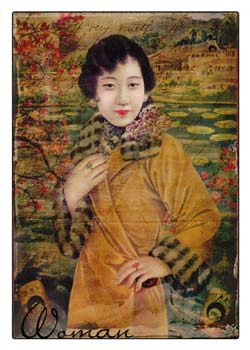 This stunning and surprising self-published deck is professionally printed and nicely-finished on playing card stock, with narrow white borders and a thin black line that frames each card exactly appropriately. The lovely brown diagonal pattern on the backs adds a feeling of mystery to the deck.

Not that the deck needs beautiful backs to lend it mystery. In the hand, these cards are even more interesting than in the scans. Some visual elements, like color and tone and the use of writing "underneath" the collage images, are obvious in the scans. Others only became clear when the 36 cards are laid out on the table.

For example, the cards demonstrate a terrific sense of composition. The cards are not all composed the same (one figure in the middle of the card) nor is each card's composition completely unique (as in some collaborative and collage decks). The deck strikes a perfect balance, with just enough visual similarity to unify the deck, and just enough variation to make each card distinct.

Another surprise is that the writing on most of the cards becomes compelling when you hold them in your hand. I find myself picking out words and phrases from the text on the cards; the text enriches the cards well beyond the (stereo)typical Lenormand images.

Some words are large and easy to read. My favorite, due to its hilarity, is the choice in Path between "study and cleanliness" or "cigarettes and self-abuse."

The cards share the same cursive text in the background (perhaps from a letter?) but because of the placement of the foreground images and shading, some words are clear and others obscured. "Quietly" in Hearts and "quietly" in Snakes reads and feels not at all the same.

Lenormand images of Bear, Clover, Mice, Ring, Lily, Cross, Ring, etc., are often presented as a simple picture of the named object. In the Melissa Lenormand, nothing is quite so simple. For example, Ship includes a wrong-side-up "This Side Up, Handle with Care" label. Letter depicts the sweetness of correspondence, but also discipline and training (see for yourself when you get the deck!). These elements surprised and enlightened me well beyond what is visible in any of a number of Lenormand-based oracles.

In short, the Melissa Lenormand has layers and depth that are subtle and pleasing, both aesthetically and also for reading.

Melissa Hill is a wife, mother and reader from Indiana. She began working on the “Melissa Lenormand” in 2009, as a way to better understand the Lenormand cards and meanings. As she posted her work on the Internet, interest grew, with the end result being a Limited Edition deck of 36 cards, with a first printing of 250 decks.

Inspired by the French Lenormand cartomancy cards, this deck is done in what the author terms “vintage ephemera”, using predominately public domain vintage post cards and elements from vintage advertising.

The deck comes with a signed and numbered card, 36 basic cards, 7 alternate cards and a 36 page LWB (Little White Book). There was also a lovely little white bag included, which held a Tarot Tile necklace with the female image from the Melissa Lenormand card on it. The box has a greenish background, with an image of the Melissa Lenormand card on the back, and an image of Man on the front. (Melissa also included one of her business cards – which is one of the most well thought out cards I have ever seen.)

The images on the cards are presented in a lovely layered manner – often with antique script in the background, with images layered over it. The cards are as follows:


The LWB starts out with a short discussion of Marie Anne Adelaide Lenormand, a famous fortune teller who read the cards for Napoleon and Josephine. The 36 card deck that she purportedly used became known as the Petit Lenormand. Melissa goes on to say that there are various schools of reading for the Lenormand system, some of which offer specific meaning, defined by the combination of cards drawn. Others offer specific meanings relating to the position of certain cards in certain spreads.

Melissa set these systems aside, realizing that for her it was more useful to derive meaning from the symbols, and intuitively defining how those images related to the situation she was reading about. Along this same line, Melissa notes that she does not present guided spreads in her LWB. The spreads that she presents are open – two and three card readings, and the ML Relationship spread.

In learning to read with this deck, Melissa suggests that you spend time examining the pictures, working with the layered artwork, and how it makes you feel. She also notes that there are Internet sources that will help the reader learn the different systems that can be applied to reading with these cards.

The card backs are reversible, and show a gray pattern. The card faces show a Ľ” white border surrounding the picture. The name of the card is in the lower left hand corner, in black script. Three of my favorite cards are Ring, Bird, and House. Ring is based on an old advertisement for diamond rings. Bird is fascinating – it shows a text (as in an old letter) background, with a large, dark bird in flight superimposed over it. Standing on the bird is a young female figure, dressed in blue. House to me is a very erie card. In the background we see multi-story buildings. In the foreground we see a house, with a single dark tree behind it. On a branch of he tree, overlooking the house, we see a dark bird that appears to be looking down into the house.

Home life, family, relationships, special places, ties to the past, ties to this world.

The little cottage in the foreground of the House card is from a vintage greeting card. It may look lovely and provincial, bunt in the background you see the outline of city buildings – reminding us that a “house” can take on many forms. The bluebird show that wherever we find the most happiness in this world – that is our home.

There is so much that I love about this deck! The antique sepia coloring, the vintage dress, the whimsical nature of the cards – it all comes together in a lovely manner that, at 2 ˝” by 3 ˝”, sits nicely in smaller hands.