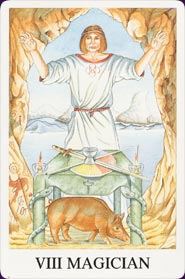 The Merlin Tarot has 78 cards based on the Arthurian legends. The reordered major arcana, aces, and court cards are beautifully drawn, but the suits (Birds are Swords, Serpents are Wands, Fish are Cups, and Beasts are Disks) have very spare pip cards. They are disappointingly repetitive and difficult to interpret intuitively.


Card Images from the Merlin Tarot 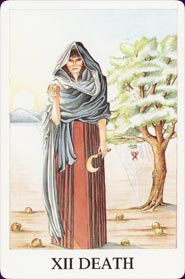 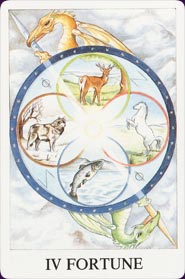 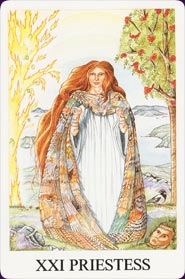 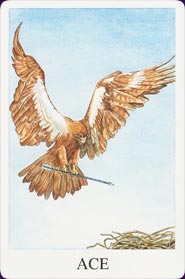 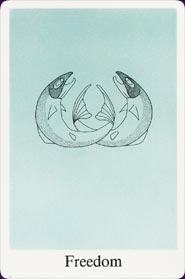 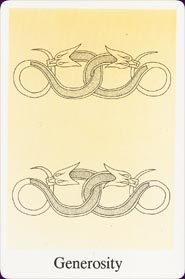 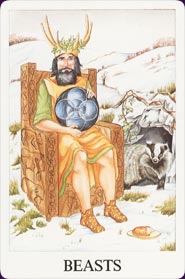 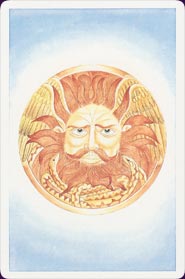 If you have a look around the web and on the forum, you will find very mixed reviews on this deck. That is because it is one of those you either love or hate as soon as you see it. It was designed by R.J. Stewart and illustrated by Miranda Gray. The edition I’m reviewing here is the older version, which came with the ‘Handbook’. Newer versions are in a slipcase and include a journal for your own notes as well. The basis for the deck is formed by the life story of Merlin, as written by Geoffrey of Monmouth.

The order of the Major Arcana is radically different from a traditional deck. His unusual order might surprise you if you are familiar with traditional Tarot Decks. None of the Majors are in a conventional position and three have been renamed:


RJ Stewart does give a good explanation of this order and his reasoning behind it in the accompanying book. He bases it on Merlin’s life and the natural order of the universe as he sees it. But the differences with tradition do not stop here.

The Minor Arcana does not use the conventional suits of Cups, Swords, Pentacles and Wands. Instead, the suits are named after the animals that live in the element the suit represents. Cups in traditional packs symbolise water, so he has named the suit fishes. In the same manner Swords become birds, pentacles become beasts and wands become (fire) serpents.

The cards are made of good cardstock and reasonably large at 8 x 12 cm (3 x 4 ˝ inch) with a small white border, which holds the cards titles on the bottom. The images are beautifully drawn by Miranda Grey. The colours are soft and pale, yet the images are very vibrant and alive. Anyone who does not like harsh contrasts or dark images will like this deck. The Majors, Court Cards and Aces have scenic images, while the pips are illustrated with Celtic drawings or the animals of the suit. The Majors have the titles in the border, while the pips have keywords. This makes intuitive reading possible, even without scenic pips. It does mean the common titles, i.e. Four of Cups, have been removed. For those who wish to use numerology, the animals have been drawn in such a way that they can be easily counted. I find the setup of the deck helpful when glancing at a spread to determine the overall feel and to quickly see if any majors/courts have come up.

The book supplied with the deck has detailed descriptions of the cards and it’s meanings, making other reference books redundant. Also included are various mediation ideas and some card layouts to help study the relationship between the cards. One of these layouts is included in the deck as reference cards. As well as Tarot spreads, it gives suggestions of divination methods and studies.